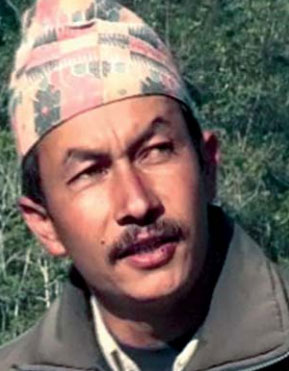 The Dailekh District Court on Sunday sentenced five accused of the torture and murder of journalist Dekendra Raj Thapa in 2004 for periods between one-and-half and two years in a landmark case that could set a precedent for other war-era crimes.

Forensic examination of Thapa’s body showed he had been buried alive, and the prosecution had demanded life sentences. Two of those sentenced today will be released since they have already spent their terms in detention.

Human rights activists were apalled that the sentence was so light, and said it was disproportionate to the seriousness of the crime. They had lobbied for the case to be tried after the Maoist prime minister Baburam Bhattarai ordered police in 2012 to discontinue investigation into the case.

In June 2004, the Maoists blocked the pipe that brought water to the district capital, and Dekendra Thapa and other journalists walked to the Maoist-controlled area to try to persuade them to open it. Instead, they were kidnapped by the rebels, and while the others were released, Dekendra was detained.

A month later, eyewitness reports started coming in about the Maoists torturing him by hanging him upside down and beating him until he died. The Maoists put up posters claiming responsibility for killing him.

ekendra’s wife Laxmi lobbied hard and got forensic experts to find and exhume his body after the conflict ended in 2006. When they found the body, his mouth was wide open, his left leg and right elbow were broken. He had been buried alive.

Fast forward to 2012: police inspector Binod Sharma had kept the investigation open and finally arrested four of those accused of Dekendra’s torture and murder. One of them was Lachhiram Gharti, who confessed to the torture and asked to be detained because he was wracked by guilt.

By this time, Maoist ideologue Baburam Bhattarai had become prime minister in Kathmandu, and got his handpicked Attorney General Mukti Pradhan to call off the investigation. Prosecuting the guilty would have set a precedent for the investigation of other war crimes.  Senior Maoists leaders are implicated in other cases, including the torture and murder of Krishna Adhikari, whose father Nanda Prasad Adhikari died in September demanding justice for his son.

Back in Dailekh, key witnesses in the prosecution of Dekendra’s killers had all retracted their testimonies one by one. Chandra Bahadur Gharti had told investigators that on 11 August 2004, he and Man Bahadur Sunparai heard screaming at the Nepal Rastriya Primary School and went to find out what was happening. “We saw Lachhiram Gharti and eight others beating journalist Dekendra Thapa with sticks. When Dekendra couldn’t speak anymore, we saw them drag him to Lachhiram’s house,” reads Gharti’s testimony.

However, Chandra Bahadur later made the following deposition at the District Court: “I was away working in India when the event happened, and returned only four or five months later. I don’t know who killed Dekendra, where or how.” Another witness, Amrita Sunakhari, had told the same investigator: “A Maoist named Bam Bahadur Khadka alias Mukti, Lachhiram and others had kidnapped journalist Dekendra Thapa and kept him in our house.

fter questioning, they took him towards Dwari, and I later heard that they killed and buried him.” But Sunakhari withdrew her statement and told the court recently: “I don’t know Dekendra Raj Thapa, I don’t know where, when and how his death occurred. I don’t know if the accused killed him, the accused should not be punished.”

Prakash Adhikari, a Dailekh based journalist who covered the investigation for the past 10 years, says: “Maoist leaders had gathered all the witnesses from Naumule, Dwari and Baluwatar in a hotel in the district capital, forcing the accused to retract their statements.”

Lawyer Basanta Gautam, who has been representing Dekendra, also confirms that witnesses withdrew the case because of threats. Lawyer Govinda Bandi says the reason witnesses have retracted their testimonies after threats is because of the lack of witness protection laws.

A catastrophe makes a mockery of a lifetime of accumulation.
DANIEL LAK

Pashupati Paneru adds another feather in his shuttleSURESH RAJ NEUPANE

For a month now, western Nepal remains cut off by landmined highways

Our cult of violence

The victory of good over evil must be enacted in the triumph of peace over violence
RAJENDRA PRADHAN
Wow! It namely likewise fine treatise about JavaScript, babyliss pro curler I dissimilar Your post doesn't acquaint any sense. ray ban outlet uk if information are defined surrounded sketches one can effortlessly be versed with these. hollister sale I think a visualized exhibit can be better subsequently simply a effortless text, chanel espadrilles for sale that why it gives you improved quality. getnjloan.com Can you amuse forward me the code for this script alternatively interest distinguish me surrounded detail among relation apt this script? Vivienne Westwood online get a babyliss perfect curl Very soon this network sheet longing be outstanding among all blog viewers, isabel marant sneakers saleI too prefer Flash,