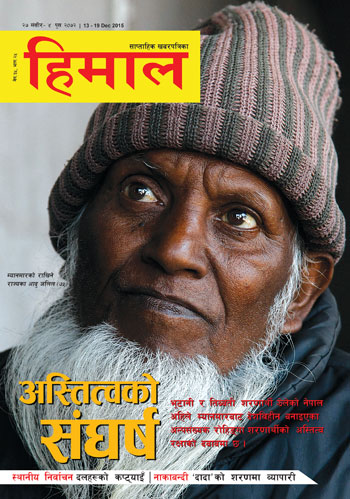 Burma’s persecuted Rohingya Muslim refugees have been taking flimsy boats across the Bay of Bengal to the coasts of Thailand and Malaysia since 2012, but a few have ventured north in a perilous overland journey through Bangladesh and India to enter Nepal.

While thousands have been abandoned and perished at sea, in Nepal the 160 Rohingyas face a bitter winter in shelters in Kathmandu where humanitarian agencies are running out of money to look after them.

The UNHCR is to stop providing a subsistence allowance to the Rohingya refugees from December, saying it has run out of money because of refugee crises in other parts of the world. The ‘boat people’ who fled anti-Muslim violence in Burma are now fighting yet another battle for survival in Nepal.

The refugees have been on sit-in protests in front of the UN agency’s office in Maharajganj since October, and they have been repeatedly chased away with batons by the Nepal Police. Now, four Rohingya youth have started a hunger strike from 1 December.They want their allowances until they get a chance to be resettled.

The UNHCR had been providing monthly allowances of Rs 5,750 to male, Rs 3,330 to female and Rs 2,700 to children Rohingya refugees who came to Nepal before 2013. Others who landed in Nepal since 2013 have not been recognised by UNHCR as ‘urban refugees’.

“Refugee allowances are now being cut everywhere in the world, not just in Nepal, but we continue to provide allowance for elderly and children,” says UNCHR’s Dipesh Das Shrestha. “Instead of subsistence allowance, we are now focused on giving vocational training to refugees. And we continue to support them for medical treatment and education, too.”

Rohingya refugees say the UNHCR’s decision has dealt them a double blow in the wake of India’s blockade of Nepal. “The blockade has made even local Nepalis’ lives difficult, and we suffer even more,” says Jafar Miyan, 31.

The Rohingyas have also called on the UN to help them to either go back to western Burma or to resettle in a third country. Hasan Hasan, 23, was one of the first from his community to escape to Nepal in 2012, and is among those on hunger strike.

Nepal views the Rohingyas as ‘illegal immigrants’ and charges them $5 for each day they live in Nepal. But Home Ministry spokesperson Laxmi Dhakal says these fines can be waived for those who have no money to pay.

Of the Rohingyas who have sought refuge in Nepal only 120 of them have obtained ‘urban refugee’ cards from UNHCR. Apart from refugees from Bhutan, Tibet and Burma, Nepal now provides refuge to people from Pakistan, Afghanistan, Sri Lanka, Iran, Iraq, Somalia and even Congo.

Since 2012, there have been several brutal pogroms against the Rohingya by Burma’s Buddhist majority who consider them ‘Bengali’. The Rohingya have actually lived in Burma’s Rakhine state for at least four generations, and most of them held Burmese citizenship till the early 1980s.

In 1984, Rangoon enacted a new citizenship law declaring Rohingyas as illegal immigrants from Bangladesh. They were then effectively deprived of government jobs and facilities and tensions ran high.

Since 2012, about 120,000 Rohingyas have fled Burma, either to Bangladesh, Thailand or Malaysia.

Some, like Hasan, fled north to India in search of his family, and from there travelled 1,400 km to eastern Nepal after someone told him there were refugee camps here. Only to discover that they were actually camps for refugees from Bhutan.