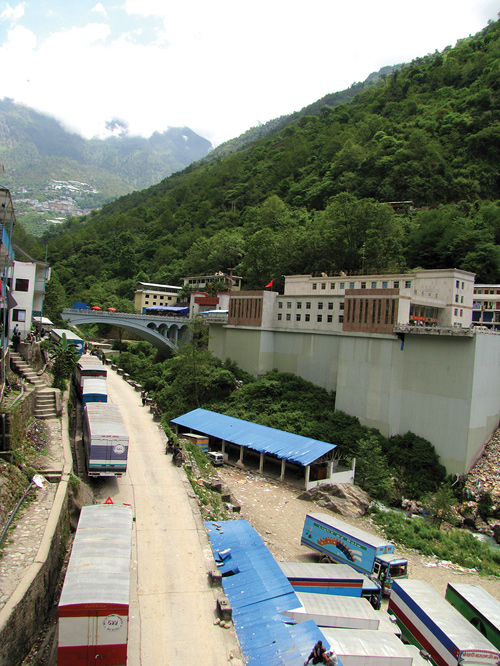 After India cut off Nepal’s trade lifeline with the south three weeks ago, the Nepali authorities have weighed multiple options to ease an acute shortage of fuel and other essential commodities. Their first option was to import petroleum products from China, but that turned out to be the least workable one because the earthquake has blocked the two main roads leading north: Tatopani and Rasuwagadi. The Rasuwa road reopened this week with Chinese assistance but the Tatopani highway remains blocked by huge boulders.

Ananda Prasad Khanal, the former Director General of the Department of Roads (DoR), is not surprised by the slow pace of repairs. “Nepal has never given priority to increase its land connectivity with China,” he says. DoR officials say the government was not serious enough to reopen the Tatopani road until the Indian blockade. Only Rs 6 million was allocated to reopen the Tatopani road, even though repairing just 1 km of the damaged section requires around Rs 10 million.

Laxmi Dutta Bhatta of the DoR, says the budget allocated for the Tatopani road was merely a drop in the ocean. “We needed at least Rs 50 million and if we had that we could have opened the road even before the blockade,” he says. The sluggishness with which the Tatopani road is being repaired bears testimony to the fact that Nepal has never given due importance to building connectivity with China, thereby relying heavily on India for essential commodities. In the wake of a crippling embargo enforced by India, Nepal finally seems to have realised the mistake that it made by not maintaining alternatives.

Khanal says: “If our political leadership had foreseen the risk of relying on one country for trade, the Indian blockade would not have choked us.”

Apart from Tatopani and Rasuwagadi, six other Nepal-China highways are now under-construction. Two of them are likely to be completed within the next few years, and work is in progress along the 406 km highway connecting India’s Sunauli with Tibet’s Korala through Jomsom and the 291 km road from Janakpur to Phalate.

The 391 km Kechana (Jhapa)-Olangchungola (Taplejung) and the 340 km Biratnagar-Kimathanka (Sankhuwasabha) roads in eastern Nepal and the 682 km Nepalganj-Hilsa (Humla) and the 398 km-long Brahmadev Mandi-Tinkar roads in western Nepal are other important under-construction trade routes.

But the construction of these trade routes are moving slowly. In 2010, Bijendra Bade of the DoR had told us vehicles would start plying along all eight Nepal-China roads within 10 years. Five years later, there isn’t sign of much progress.

China looks keen to push the roads, but Kathmandu is dragging its feet. Nepal’s ambassador to China Mahesh Maskey says the two countries had agreed to open six more border points when Chinese premier Wen Jiabao came to Kathmandu in 2012.  But the Nepal government did not show interest to follow up with that agreement.

Many believe that Nepal’s political leadership does not want to offend New Delhi by accelerating Nepal-China roads. But with the blockade, there is growing pressure to accelerate the roads to the north.

Saturday afternoon fever in Thamel, and a dancing monk.
DANIEL B HABER

"We are part of the problem and we are ready to make a difference."

Suraj Vaidya-President of the Vaidyas Organisation of Industries and Trading Houses
Wow! It namely likewise fine treatise about JavaScript, babyliss pro curler I dissimilar Your post doesn't acquaint any sense. ray ban outlet uk if information are defined surrounded sketches one can effortlessly be versed with these. hollister sale I think a visualized exhibit can be better subsequently simply a effortless text, chanel espadrilles for sale that why it gives you improved quality. getnjloan.com Can you amuse forward me the code for this script alternatively interest distinguish me surrounded detail among relation apt this script? Vivienne Westwood online get a babyliss perfect curl Very soon this network sheet longing be outstanding among all blog viewers, isabel marant sneakers saleI too prefer Flash,