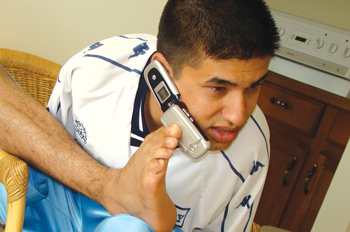 Sudarshan Gautam became the first person without both hands to climb Mt Everest, stepping on its summit at 9am on 20 May and being the first double hand amputee to climb the world’s highest mountain.

Since the last six years Gautam has been living in Canada, working as a motivator for disabled people and raising campaigns with the slogan – ‘Disability is not inability’.

In 1994 Gautam lost both his arms as he tried to get a kite unstuck from an electric pole using an iron rod. He slowly recovered and taught himself to cook, shower, shave, and dress . Before long, he had learnt how to ride a horse, and in 2001 he even learnt how to drive a car in Kathmandu.

In 2005, Gautam climbed the 5520m Yala Peak in Langtang without oxygen or prosthetic arms. It was then that he set his sights on Everest, only to realise this dream eight years later with the help of safety ropes and four climbing sherpas.

Gautam’s record previously belonged to American Thomas Whittaker, who made it to the world’s highest peak in 1998 with one prosthetic leg. Also in 2001, Erik Weihenmayer of the US was the first blind person to summit Everest. This year (read article) , India’s Arunima Sinha became the first woman amputee to climb Everest.

Is the price of democracy an eternal tolerance of corruption?
PUSKAR BHUSAL

Stop complaining, and start helping Nepal
RABINDRA MISHRA
Wow! It namely likewise fine treatise about JavaScript, babyliss pro curler I dissimilar Your post doesn't acquaint any sense. ray ban outlet uk if information are defined surrounded sketches one can effortlessly be versed with these. hollister sale I think a visualized exhibit can be better subsequently simply a effortless text, chanel espadrilles for sale that why it gives you improved quality. getnjloan.com Can you amuse forward me the code for this script alternatively interest distinguish me surrounded detail among relation apt this script? Vivienne Westwood online get a babyliss perfect curl Very soon this network sheet longing be outstanding among all blog viewers, isabel marant sneakers saleI too prefer Flash,