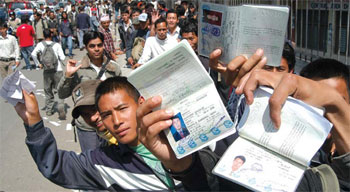 MIN RATNA BAJRACHARYA
Forty-year-old Krishna Bahadur Budha of Rukum and Jabar Singh Darlami, 25, of Nawalparasi had never met each other before in Nepal. They were both caught without passports by immigration in Iran as they were trying to make their way into Europe. Their case would have languished in the local courts had Nepal’s ambassador to Pakistan Bharat Raj Poudel not intervened. Poudel, who is also in charge of Nepali affairs in Iran, took their case up to Iran’s vice president and the two men were pardoned. Although they are technically free to go, Budha and Darlami can’t go back to Nepal because they don’t have money to buy a ticket.

Budha and Darlami are not the only ones taking the backdoor to Europe. A new route for human trafficking has hundreds of Nepalis flying to the United Arab Emirates, crossing the Persian Gulf, and then going over land via Iraq and Turkey over to Europe. In the past year, Poudel says his embassy managed to return home dozens of Nepalis, sometimes in groups as large as 15.

Migrants caught in Turkey are usually handled by the International Red Cross, International Migrants’ Alliance, and other human rights organisations and eventually sent back. Since these organisations aren’t as active in Iran, it is difficult for those caught to make a case. And if the guilty parties cannot convince authorities that they have the means to return immediately, they are treated as ordinary criminals by Iran’s courts.

According to an official at the Ministry of Foreign Affairs, countries like Iran and Iraq are not as open to other countries and their administration tends to treat those without papers on par with local criminals, instead of considering them victims of human trafficking.

Narayan Prasad Dhakal was working for the Al Amco company in Iraq when his visa expired and authorities put him in jail in Basra. Sushma Gurung was caught, accused of stealing $10,800 and 250 grams of gold from her Iraqi MP employer. The government stipulated a Rs 170,000 bail on her and she is still in custody. According to a statement released by the Iraqi government on 3 January, three Nepalis - Kamal Tamang, Devi Bahadur BK, and Bal Bahadur - were caught begging in the country’s northern Kurdistan province. Because the migrants do not reveal the actual reason why they are caught, getting them to return home is harder. They always repeat what their agents have taught them, that they were ‘kidnapped and sent here by a Bangladeshi agent’, which makes authorities even more suspicious.

Earlier in 2013, five Nepalis were caught in Iraq after an agent convinced them he was sending them to Kuwait. They were given five-year sentences. After Nepal requested Iraq that they were innocent, the government decided to let two of them go free. The other three are caught in a blood money scheme, rescue from which is made near impossible by Sharia law.

How do you cure common cold?

Amid the useless noise surrounding the passing of the old year, here's to pin-drop silence
RABI THAPA

KASHISH DAS SHRESTHA
Wow! It namely likewise fine treatise about JavaScript, babyliss pro curler I dissimilar Your post doesn't acquaint any sense. ray ban outlet uk if information are defined surrounded sketches one can effortlessly be versed with these. hollister sale I think a visualized exhibit can be better subsequently simply a effortless text, chanel espadrilles for sale that why it gives you improved quality. getnjloan.com Can you amuse forward me the code for this script alternatively interest distinguish me surrounded detail among relation apt this script? Vivienne Westwood online get a babyliss perfect curl Very soon this network sheet longing be outstanding among all blog viewers, isabel marant sneakers saleI too prefer Flash,