Dr Baburam Bhattarai and me

If Dr Bhattarai hadn’t been born, my brother would be alive
Ramesh Khatri 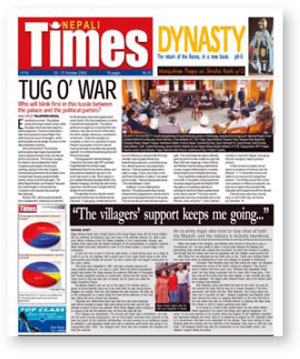 Even though I didn’t want to, fate has made my life intersect with that of Dr Baburam Bhattarai. The party of which he is the chief ideologue cruelly killed my brother, Mohan Khatri, at a hotel he ran in Mude of Sindhupalchok in 2002.

When they brought his body home after the post-mortem, my nephews told me: “Don’t look at his face, you won’t be able to sleep.” My last sight of my brother was a body wrapped in a plastic sheet.

Those who had seen my brother said there was a big khukri gash on his brow, four of the fingers of his right hand had been chopped off, he had deep knife wounds on his neck. It was Dasain time and even sacrificial goats would have been treated better and killed swiftly to shorten the pain. Not my brother. He wasn’t killed in battle, he was attacked by 20 armed cowards and their orders apparently came from Agni Sapkota. But it is Dr Bhattarai who bears the ultimate responsibility. If he hadn’t been born, my brother would be alive.

My other indirect relationship with Baburam Bhattarai is because of my friendship with his teachers at Luitel Amar Jyoti School in Gorkha, Thomas and Mary Varughese. After I decided to become a disciple of Lord Jesus in 1972, I used to pray often with Mary Varughese at the Putali Sadak Church.

In an interview in 2003 in Nepali Times?Thomas Varughese had said: ‘Baburam’s goals are good, but the end does not justify the means. Baburam is smart, he should learn from history.’ When he went to the United States in 2008, Baburam went to meet Thomas and Mary and his former teachers might have asked him: “Baburam where did you lose your way?” They would not have agreed with a war that ended up killing 16,000 Nepalis, whatever the goal, or their student wading in blood to come to power.

Baburam studied in a missionary school and became a revolutionary, just like another communist, Joseph Stalin. Before he died, Stalin had killed 20 million Russians. The only other communist who outdid Stalin in killing people was Mao, who was responsible for the deaths of up to 80 million innocent Chinese. Baburam used to have a figure of Mao in his office when he was prime minister. Even atheists, it seems, need to worship someone.

Thomas Varughese did not teach Baburam violence, he learnt that in Jawaharlal Nehru University in Delhi, inspired by other mass murderers in history. But from his speeches, it is clear Baburam’s conscience is bothering him now. He brought up The Hague at the Hetauda Plenum earlier this year and he must have realised that international law does not respect the revolutionary justice he used to justify the murder of fellow human beings. Maoist leaders now will have to think twice before visiting any other country besides India and China.

I had two chances to be face-to-face with Dr Bhattarai, but I couldn’t get myself to shake his blood-stained hand. Thomas and Mary Varghuese taught Baburam that one has to atone for one’s sins. The best way for Bhattarai to atone for his crimes is to change his behaviour, to abandon violence and embrace compassion.

I learnt forgiveness from Jesus Christ. I have forgiven Dr Bhattarai for my brother’s gruesome murder. What does forgiveness mean for me? I will never take him to court, nor will I seek revenge against him. But I will never respect a man who even today protects a convicted murderer like Bal Krishna Dhungel, or lets the YCL loose to break up anti-violence demonstrations outside Baluwatar.

Without true atonement, Dr Bhattarai will not be respected even if he is powerful. The souls of 16,000 people will nag at his conscience. The spirits of Dekendra Thapa, Ujjan Shrestha, Muktinath Adhikari, and countless others will pursue him until he admits his mistake and changes his ways. If the killers of Thapa could confess to his crime and ask for forgiveness, why can’t Dr Bhattarai?

Bhattarai’s prime ministership had the dubious distinction of being called the most corrupt in Nepal’s history. The treasury was looted to pay allowances to 3,000 phantom Maoist guerrillas who didn’t exist and Rs 1.1 billion was pocketed by Dr Bhattarai’s government itself. He threatened those who exposed this, saying it would ‘endanger the peace process’. With that kind of plunder, development in the country didn’t stand a chance. Bloodshed can bring governments to power, but it will never ensure good governance.

The villagers’ support kept me going

Three cheers for the anonymous cop at the Gausala beat
JIGGY GATON
Wow! It namely likewise fine treatise about JavaScript, babyliss pro curler I dissimilar Your post doesn't acquaint any sense. ray ban outlet uk if information are defined surrounded sketches one can effortlessly be versed with these. hollister sale I think a visualized exhibit can be better subsequently simply a effortless text, chanel espadrilles for sale that why it gives you improved quality. getnjloan.com Can you amuse forward me the code for this script alternatively interest distinguish me surrounded detail among relation apt this script? Vivienne Westwood online get a babyliss perfect curl Very soon this network sheet longing be outstanding among all blog viewers, isabel marant sneakers saleI too prefer Flash,