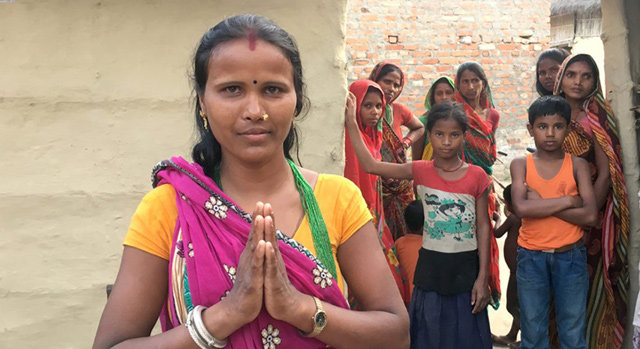 As per the new Constitution, 6,680 Dalit women will be elected in the current local polls — a significant achievement for this group, who have been discriminated against for decades. CPN-UML deputy mayor candidate of Surunga Municipality, Silam Kumari Paswan, 24, describes this as an historic opportunity: “Dalit women are ignorant about their rights: we should inform them, and I will encourage them to fight for justice.” She adds: “Very few in the Dalit community are literate. I am currently doing my Bachelors. Many people in my community do not understand Nepali. The fact that lower-caste people need to tolerate discrimination or untouchability has been wedged in their minds.” Likewise, 60-year-old Ramrati Sada, a Dalit ward candidate representing the Nepali Congress says: “Dalits have neither land nor citizenship. They are oblivious to acquiring birth, marriage or death certificates. Dalit students struggle in the Nepali language despite being in school for 5 years.”  Sada’s election promises include creating a conducive environment to ensure enrolment of Dalit children in schools.

She has already served as a ward member and says she doesn’t suffer discrimination but members of her community do. “It breaks my heart to see how badly they are treated.”   Nepali Congress ward member candidate of Surunga-7, Shanti Devi Mandal, says: “The time has come for us to provide justice, not beg for it.”

According to the 2011 census, 19 out of the 26 Dalit castes live in the Tarai and they are often victims of caste-based discrimination and ostracism. Dalit women now see local elections as a way to emerge from discrimination and untouchability.

Rather than promising monorails and highways, Dalit women candidates are raising social issues, including sharing meals together with so-called upper classes, permission to enter temples and enrolling Dalit children in schools.

Shiva Shanker Das was killed for having an inter-caste affair six years ago. Shovit Ram of Deuri village was mistreated for sitting with upper-caste people during a feast. Many believe things like this will happen less after local elections result in greater representation of Dalits.

Mamata Devi, 21, of Harper is campaigning day and night for the Dalit candidate even though she is not a voter and doesn’t even have a citizenship certificate, like 20 other Khatwe women of her neighbourhood. She applied for citizenship but was denied it by the district administration office (DAO), which cited lapses in the recommendation from the VDC.

Despite being married for four years, Mamata’s in-laws aren’t bothered about providing her the necessary papers. She is compelled to get help from other people to receive the money sent by her husband, who is working overseas.

Mamata is campaigning because she thinks she can get citizenship once a Dalit candidate is elected. “People of higher caste do not support us. Therefore, there has to be someone from our community to understand our problems,” she says.

Married for the last five years, Manisha Devi Mandal, 23, also doesn’t have citizenship because her marriage was never registered. She blames her husband and in-laws for not paying attention to registration. Without citizenship, she can’t vote.

“It will be easy for me to get all these things done if Shanti Devi Mandal gets elected since she understands my problem,” she says.

Mamata Khatwe, 20, has neither a marriage certificate nor a citizenship certificate. “I talked to my in-laws but in vain,” she said. Similarly, 23-year-old Lalita Mandal of Surunga has made up her mind to get her citizenship once her husband returns from Malaysia. She wants it not only so she can vote in the next election, but to be a candidate.

Dalit activist Bhola Paswan says the role of Dalit women to date was limited to clapping during campaign speeches. “Now they are taking to leadership so their voices are heard,” he said.

Compared to untouchability, the citizenship issue is trickier for Dalit women because they don’t know how to work the system in the DAO and do not get much help from in-laws. Lack of literacy and language issues add to the problem.

“Only a woman can understand a woman’s problem,” says candidate Shanti Devi Mandal. “That is why I am standing for election.”

FAROOQ AHMAD
Wow! It namely likewise fine treatise about JavaScript, babyliss pro curler I dissimilar Your post doesn't acquaint any sense. ray ban outlet uk if information are defined surrounded sketches one can effortlessly be versed with these. hollister sale I think a visualized exhibit can be better subsequently simply a effortless text, chanel espadrilles for sale that why it gives you improved quality. getnjloan.com Can you amuse forward me the code for this script alternatively interest distinguish me surrounded detail among relation apt this script? Vivienne Westwood online get a babyliss perfect curl Very soon this network sheet longing be outstanding among all blog viewers, isabel marant sneakers saleI too prefer Flash,