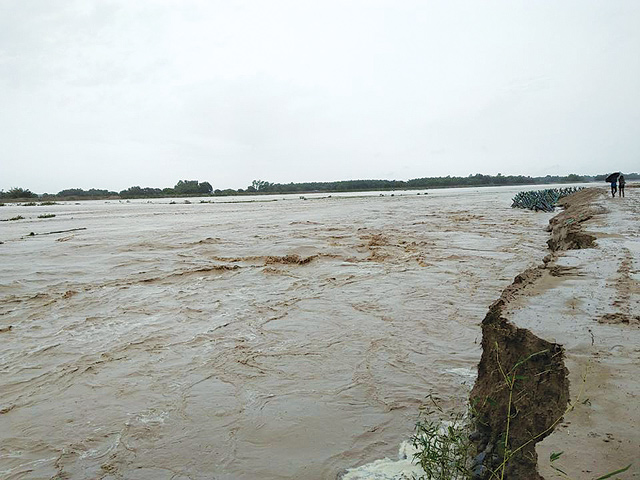 Every monsoon it is the same old story. The rains trigger landslides and floods, roads and bridges are washed off and villages in the plains get inundated. The media likes to call them ‘natural disasters’, they are indeed natural but are disasters only because of man-made interventions. Urban encroachment into the floodplains of rivers, deforestation of the Chure, haphazard road excavation along slopes, growth and lack of priority for drainage, have turned what should be a predictable annual phenomenon beneficial for agriculture into a calamity.

Since April, 40 people have been killed in floods and landslides this year alone. Last year 257 people died, and more than 1,000 have perished in the past five years. August is the worst month for monsoon-related deaths because by then the soil is saturated with the previous month of rain. Due to the early rains this year there are major landslides in July already. In fact, Baitadi saw a deadly landslide in April which used to be unheard of. The Met Department has explained the cloudbursts as being part of a westerly system that brought early rain. In other parts of the country the monsoon behaved erratically, after heavy pre-monsoon showers, the real rains started late and there haven’t been the prolonged light drizzles characteristic of monsoon precipitation. Such rain distributes rainwater more evenly, reducing landslide risk.

Some scientists say this could be due to climate change. The other risk factor is Nepal’s topography where cloudbursts channel runoff down narrow valleys, the slopes of these young mountains are inherently unstable, and the most fragile are the Chure Hills which are made from sand and boulders with thin topsoil. Once the vegetation goes on a Chure slope, the hills can be eroded very quickly by downpours. The silt is then swept downstream to the Tarai, raising river beds and forcing them to frequently change course. Increase in logging, indiscriminate sand and boulder mining has meant that these delicate slopes have been made even more precarious.

The Chure makes up 12.5% of Nepal’s area and stretches from Ilam to Kanchanpur, spanning 36 districts, with 164 rivers that are dry most of the year but turning into raging torrents in the monsoon. One of the reasons for the destructive floods in Saptari last week was the denudation and mining in the upstream Chure watershed. The other reason is inappropriate road and urban construction which have blocked natural drainage for these rivers in the monsoon. Eighty per cent of the total flow on Nepal’s rivers are derived from monsoon rains in three months. Till a decade ago, the monsoon floods on Chure rivers were a boon for agriculture. Today they are a bane.

Destruction of the Chure puts more than 10 million Nepali plains-dwellers and millions more in India at risk of floods. This is not a natural disaster, but a man-made environmental one.