After the UCPN (Maoist)'s poor showing at the second Constituent Assembly elections, Chairman Pushpa Kamal Dahal finds his party at the fringes of political debates. Nepali Times caught up with Dahal to ask what lies in store for his party's future. 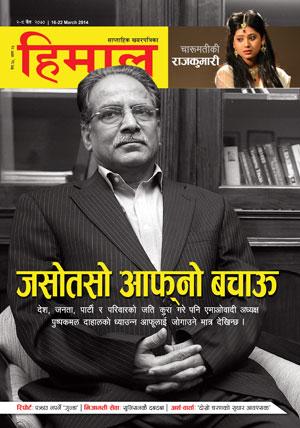 You've been party leader for a long time, how do you evaluate your years in power?

Situations rather than personal ambition made me the leader back then. I wanted to give direction to the communist revolution, so I united all factions that believed in Maoism, popular revolt, and armed struggle. Mao and Stalin were supremos until they died, but that isn't scientific because staying in power forever gets difficult after a communist revolution faces counter-revolutions.

Don't you think you and Baburam Bhattarai are preventing young blood from taking up leadership positions in the same way seniors frustrated you in your early days?

Social transformation is a job that only the knowledgeable can accomplish – this is what Marxism means. I have gone to great lengths to recruit the intellectuals into our party. Baburam, like hundreds of other committed communists throughout the country, was promoted to leadership level because of my efforts. We still emphasise knowledge and intelligence, so I don't think we are blocking the way.

But these days both you and Bhattarai are surrounding yourselves with yes-men.

Society's conflicts find their way into all parties. Factions exist and no great leader or philosopher can change this – even Marx could do nothing to dismantle cliques. We are worried about the next generation of leaders because we have failed to groom our successors.

What led your closest supporters like Matrika Yadav to go against you?

The greatest supporters often turn against you. This is human nature. Even Baburam's supporters like Mani Thapa and Mumaram Khanal opposed him him as did GP Koirala’s favourites Manhantha Thakur, Bijay Gachhadhar, and JP Gupta.

What about internal struggles in the party?

They are also part of society's class struggles. Which doesn't mean both must be handled the same way. But I accept that critics are often labelled 'enemy', 'traitor', even 'agents' because of slight differences in understanding.

You said that the Maoist party broke up due to huge differences, but now there are talks of uniting with Mohan Baidya’s faction. How should people understand these recent turn of events?

Communists have too many double standards. It started with Stalin, continued with Mao, and we still see this sophism where people say anything just to prove that their greed for power is right. We can't talk in simple terms and are driven to propound theories, which is why we can't co-exist.

Do you think Bhattarai's recent statements are in line with the decisions made at the Hetuada general convention in February 2013?

It would be best to ask him. Although Hetauda's decisions were passed unanimously, Baburam was prime minister back then and this influenced many things. His statements don't even match the decisions taken at recent central committee meeting, let alone the general convention. Now he keeps talking about 'new power' other than our party and this contradicts the decisions taken at the convention, our party’s values, and our concept of development.

But he keeps saying he is your supporter. Has this changed?

Our worldviews are different and this sometimes leads to conflict. But both of us have been together since day one. He was a politburo member when I was general secretary and a deputy when I was chairman, so in that sense he is my supporter.

Would it be correct to say Bhattarai doesn't want you as party leader?

I think he meant that both of us must step down and hand over leadership to the next generation. But that doesn't solve anything and will instead break the party. Both of us can't leave until the peace process is completed and the constitution is drafted. I told Baburam last year that we should make preparations so he can lead the party, but it is up to him to win everyone's hearts.

The party shifted Left to accommodate Baidya's group and Right after Baburam influenced the Hetauda convention. Don't you think this has also created a lot of conflicts?

That's true to some extent. Hetauda's decisions were not consistent with our party's beliefs and I have again said we must move Left after our loss in November’s elections. Our weakness is that we didn't pay attention to our class and their interests. We socialised too much with capitalists. We also placed too much significance in diplomacy as far as nationalism and sovereignty areconcerned. But my wanting to lean to the Left doesn't mean I want to go back to another war.

What do you consider as the biggest mistakes of your political career?

When we entered the peace process, I didn't do enough to balance ideology and pragmatism. That has been a great mistake which I could have prevented in 2006. I couldn't maintain cooperation with other parties and this led to the failure to formulate a constitution on time. It was also wrong of me to prevent GP Koirala from becoming the first and I shouldn't have hurried to dismiss the then Army Chief Rookmangud Katuwal. Later, while preparing for the second CA elections, we became overconfident, we overestimated our worth among the common masses and as a result we were defeated. But we had no choice except to participate in polls. At least we're on the right track now because we have a parliament.

Are you now convinced that you don't need an armed conflict for socio-economic change?

Do you think we'll have a constitution within a year and have those in power consulting with you?

The last four months suggest that we can't guarantee there'll be a constitution in a year's time. For some time now, we have not been consulted. I don't think UML and NC alone can write the constitution. They need to sit down and discuss with everyone.

What is the reason behind not wanting to have local elections before the constitution is completed? Do you fear you'll lose again?

In fact, we stand to gain more than anyone else if local elections are conducted soon. But we need a constitution more than local polls. We can draft a constitution within six months and then hold polls. If you do it now, it the animosity among the parties will be reflected in the new document. And we don't have enough time to prepare or proper laws for it.

Are you looking at the UML's upcoming general assembly with interest?

Because our space is between the Left and Right, all discussions in those circles are of interest to us. I understood this at their last general assembly, when I was prime minister. Back then, it would match my party's interest if communists were polarised, and indeed it turned out to our liking.

UML's members who criticise you are now themselves divided. Does this satisfy you deeply?

"Where were you? You were asleep again, werent you?"
MEGH RANJANI RAI

"This government has no constitutional status."

Rajdhani, 10 November
Wow! It namely likewise fine treatise about JavaScript, babyliss pro curler I dissimilar Your post doesn't acquaint any sense. ray ban outlet uk if information are defined surrounded sketches one can effortlessly be versed with these. hollister sale I think a visualized exhibit can be better subsequently simply a effortless text, chanel espadrilles for sale that why it gives you improved quality. getnjloan.com Can you amuse forward me the code for this script alternatively interest distinguish me surrounded detail among relation apt this script? Vivienne Westwood online get a babyliss perfect curl Very soon this network sheet longing be outstanding among all blog viewers, isabel marant sneakers saleI too prefer Flash,