The politics of everything

Why carve up the country into supposedly autonomous states, when there is no economic base for that autonomy? 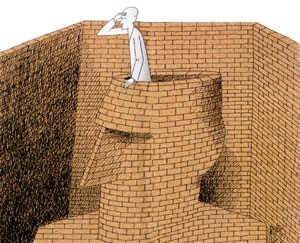 If someone somewhere wanted to sneak in a new constitution that would serve their narrow interest without anyone noticing, what would they do?

They would populate key committees of the Constituent Assembly, tasked with drafting the most important bits of the new constitution like federalism, form of governance, judiciary, secularism and electoral system, with their own henchmen. And while these committees meet behind close doors, they would throw out juicy morsels to distract the media from time to time.

You do not have to be a conspiracy theorist to deduce that this is probably what is happening today. Reporters on the CA beat are not covering the constitution-writing process. They are too busy ridiculing the CA members’ demand for Rs 50 million in personal war chests and duty-free cars, and writing about members taking cat naps, or being bitten by bed bugs. Every week there is a new story from the CA floor, but you can bet it is not about what is being decided in the new constitution.

Without the distraction of public hearings, and out of the media glare, it is quite likely that a new constitution will be rushed through the CA by January. The question is: what kind of constitution, and whose interest will it serve? It certainly doesn’t look like it will be a people’s constitution since most of the representatives of the people elected to write it are not a part of the discussions at all.

In the November elections, the only substantive issue dividing the parties was that of federalism based on ethnicity. The Madhesi-Maoist alliance that stood for it was soundly defeated. The people, as has happened many times before in this country, displayed more collective wisdom than their rulers. Politics has once more become an end in itself: a mechanism to forward personal ambition and greed, the country be damned. While in the 1990s the damage bad politics could do was limited, this time bad politics will set the country’s future on a wrong trajectory.

And in their obsession with the distribution of power in the new constitution, committee members have forgotten to question the political sustainability and economic viability of future provinces. We are putting the cart before the horse by carving up the country into supposedly autonomous states, when there is no economic base for that autonomy.

Economists have raised valid concerns about how federalism as it is envisaged will mean wasteful duplication, potentially dangerous competition for scarce natural resources and perpetual discord over the fairness of the allocation of federal tax revenue most of which will be confined to two future provinces.

Nepal’s future governance should be decentralised, there is no debate about that. The new constitution should be first and foremost about ensuring stability, raising living standards, promoting equity. Unfortunately, the kind of federalism they are foisting on us will lead us to  chronic instability, and make us all poorer and less equal.

Let’s face it, outsiders who prescribed federalism as a medicine for our ills got it wrong. Instead of steady-state politics, Nepal will turn into a volatile tinderbox. We haven’t thought federalism through, and are rushing headlong into it only because it was a slogan to restore peace in 2006. We are not prepared for its political consequences, and we have totally ignored the economic price we will all pay for it.