WHAT’S IN IT FOR US? 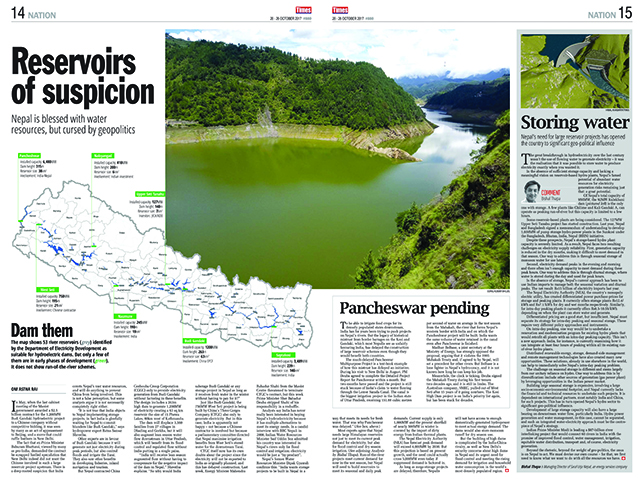 An in-depth report by Om Astha Rai in last week’s edition of this paper on plans to build large reservoirs on Nepal’s rivers showed how water and geopolitics makes a volatile mix. Joint river projects between India and Nepal have always been a political hot potato, even bringing down governments in the past because of accusations by the opposition that they sold the country down the river. And when the opposition gained power after elections, it went on to repeat exactly what its predecessor in government had done.

Politicians have discovered the hard way that water is an inflammable topic. Yet, a cool-headed analysis of Nepal’s domestic power requirement shows that the country's need for extra electricity generation capacity to meet seasonal and daily peak demand cannot be met with existing run-of-the-river schemes.

The time has come to think big dams, while minimising their environmental and social cost. Surplus peaking power from Himalayan rivers could in future also be sold to India at a premium, and multi-purpose reservoir projects have other benefits like irrigation, flood control, fisheries, river navigation and tourism.

Unfortunately, Nepal’s experience with border barrages like the Kosi, Gandaki and Mahakali have left a historical legacy of distrust of India. Till today, the public perception is that the irrigation schemes on Nepal’s three big rivers are asymmetrical and iniquitous. The strategy of Nepal’s planners, policy-makers and rulers over bilateral river projects for the past 40 years, therefore, has been to do nothing. Our cunning plan has been to not propose any projects, and delay as much as possible what has been agreed. We are so certain we will be bamboozled that we would rather just let our bounty of water flow unused down to the sea.

Most of the flow of the Ganges is from Nepal’s four main rivers, which start beyond the mountains in China. The Chure rivers are also tributaries of the Ganges, but these are dry most of the year and turn into raging torrents during the monsoon. It is estimated that 70% of the annual flow of the Ganges is from tributaries in Nepal and most of that goes down down in three months: July, August and September. It makes sense for India, therefore, to consider trapping monsoon runoff in large reservoirs to regulate the flow of Nepal’s rivers for flood control and dry-season irrigation downstream.

Planned well, these projects can also generate power and benefit the Nepal Tarai with irrigation and flood control.

Nepal and India need to start on a clean slate on bilateral river basin cooperation, for the benefit of the peoples of both our countries. Make that trilateral, since regulated flow of the Ganges will also ultimately benefit Bangladesh. But such cooperation has to be just, fair and the cost-benefit sharing should be proportionate. It is in India’s national interest to ensure that the Nepali people accept the building of reservoirs that will permanently submerge their valleys, but they first need to be convinced that the benefits will make inundation worth it. For its part, the Nepal government must abandon its dog-in-the-manger policy, and respect international law as it pertains to the rights of the lower riparian.

Indian Prime Minister Narendra Modi, during his visit to Nepal in 2014 was able to restore the trust of most Nepalis that India would not act like a bully, and instead try to be a benevolent and magnanimous elder brother. In a speech to Nepal’s Parliament he announced that the flagship Pancheswar Project on the western border river would be a symbol of this new start.

Much water has flowed down the Mahakali since then: there was the Blockade and there have been four prime ministers in Nepal. Prime Minister Deuba signed the original Mahakali Treaty during his first leadership tenure 20 years ago.

During a visit to New Delhi in August he said that the detailed project report for Pancheswar would be finished within a month. But negotiations are still stalled over sharing irrigation water on the Sarada Canal downstream on the same river.

Nepal-India relations should not be governed by such perennial paranoia. Enlightened self-interest should allow people in India and Nepal to benefit from closer economic, cultural and political ties. Indian investment can kickstart Nepal’s infrastructure and energy development, boost tourism, manufacturing and services to create jobs here. But it takes two hands to clap, and cooperation is only possible with mutual trust based on principles of fairness. Successive rulers in Kathmandu have kept up a level of suspicion about India for political advantage at home. Nationalism is synonymous with India-bashing, and New Delhi has often obliged by playing Big Brother.

Balanced negotiations also means we need bureaucrats and politicians in Kathmandu who actually understand water issues in general, and the technicalities of large reservoirs in particular, so that they can safeguard Nepal’s long-term interests.

Hydroelectricity generation in Nepal will be inextricably linked with downstream benefits of regulated flow of rivers, and both have to be factored in when there are future bilateral negotiations. From here on, Nepal’s strategy for hydro-diplomacy with India over river reservoirs has to result in an answer to the question: “What’s in it for us?”

Interview with Royal Nepal Army Spokesman Brigadier General Dipak Gurung in Samaya, 9 June
Wow! It namely likewise fine treatise about JavaScript, babyliss pro curler I dissimilar Your post doesn't acquaint any sense. ray ban outlet uk if information are defined surrounded sketches one can effortlessly be versed with these. hollister sale I think a visualized exhibit can be better subsequently simply a effortless text, chanel espadrilles for sale that why it gives you improved quality. getnjloan.com Can you amuse forward me the code for this script alternatively interest distinguish me surrounded detail among relation apt this script? Vivienne Westwood online get a babyliss perfect curl Very soon this network sheet longing be outstanding among all blog viewers, isabel marant sneakers saleI too prefer Flash,