If it’s the top leaders who decide everything in secret, what is the point having a Dialogue Committee, a Task Force or even an elected Constituent Assembly? 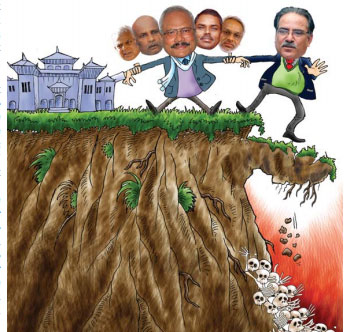 BILASH RAI
The atmosphere inside the Prime Minister’s parlour at Baluwatar on 20 December was chilly, and it wasn’t just that the heating wasn’t adequate. The top leaders of the Nepali Congress, UML, UCPN(M) and Madhesi Front who had gathered around did not have their usual smiles, and there was no back-slapping.

UML Chair KP Oli, blunt as always, lashed out at Pushpa Kamal Dahal accusing him of being publicly two-faced: sabotaging the constitution writing process while appearing to be working on finding an agreement. “Please don’t try to divide the country by dragging it into ethnic conflict, and push an economically unviable federalism,” Oli said. PM Koirala used more diplomatic language, but his advice to Dahal was the same.

Dahal got up and abruptly walked out. Outside, he accused Oli of trying to be a “maharaja” and two days later held a press conference with 30 Madhesi and smaller ethnic-based parties to announce a street stir and general strikes in the run-up to 22 January against what he said was the NC-UML trying to bulldoze a constitution on the basis of their two-thirds majority in the CA. Even more intriguing, the CPN-M led by the ailing Mohan Baidya which boycotted elections, and isn’t even in the CA, also announced parallel strikes for mid-January “in coordination” with Dahal.

Nothing in Nepali politics is at it appears, one has to read between the lines of headlines. So, if it seems like the disagreement about how many federal provinces, of what kind, and what they should be named looks intractable, you can be sure the argument is not about federalism at all but about something else. Indeed, it is not the constitution that is holding things up since the NC-UML on the one hand the Maoist-Madhesis on the other had both narrowed down their differences in recent months.

As we have been pointing out in this space for months now, the deadlock is actually about the post-constitution power play. There was an agreement in February 2014 between the NC and UML about having an election for president, vice-president, prime minister and CA chair within one month of the promulgation of the new constitution. What no one foresaw last year was that the politicians would be so selfish that they would use those positions as bargaining chips for passing a new constitution. It is tragic that a document of such great importance to the future of this country is held hostage by the lust for short-term power of a few people at the helm of this country.

Dahal has made no attempt to hide the fact that he covets the president’s job. In repeated meetings with NC and UML leaders he has said: “What’s in it for me?” President Ram Baran Yadav is adamant that the constitution allows him to continue till the next general election under a new constitution. Oli had a pact with Koirala to rotate the prime ministership. Everyone now seems to be having second thoughts about past agreements on power-sharing, but they are trying to mask that by concocting excuses about differences over federalism and form of government in the new constitution.

There is no doubt that the NC and UML are trying to press home the advantage of their combined strength in the CA. There is some truth in the Maoist argument that the old boys in the NC-UML are status quoists. But no one believes anymore that the Maoist-Madhesi agenda is any more inclusive or progressive. They are as opportunistic and greedy as everyone else.

This being the case, we see no other way to break the logjam than to push through on 22 January a constitution draft containing just the points of agreement, leaving the contentious issues for later. Failing that, we can allow the opposition to write notes of dissent. After all if the Hindu-right and monarchist RPP-N, whose disagreement with the NC-UML on the constitution is even more fundamental than the Maoists, says it can accept a majoritarian constitution, there is no reason why the Maoists can’t.

And if that doesn’t work, the alternative is a déjà vu scenario from 28 May 2012 when we once again have no constitution, and the parties give themselves more time. One face-saving device in front of their electorate could be for Koirala to form a government of national unity and pledge to finish the job once and for all in early 2015.

“I want to be executive president”, From the Nepali Press

One month to go, Editorial

Ordinary Nepalis seem to have inherently more common sense than the politicians who represent them.

Motorcycling across Nepal is a great way to be reminded of this country's amazing social harmony
NARESH NEWAR
Wow! It namely likewise fine treatise about JavaScript, babyliss pro curler I dissimilar Your post doesn't acquaint any sense. ray ban outlet uk if information are defined surrounded sketches one can effortlessly be versed with these. hollister sale I think a visualized exhibit can be better subsequently simply a effortless text, chanel espadrilles for sale that why it gives you improved quality. getnjloan.com Can you amuse forward me the code for this script alternatively interest distinguish me surrounded detail among relation apt this script? Vivienne Westwood online get a babyliss perfect curl Very soon this network sheet longing be outstanding among all blog viewers, isabel marant sneakers saleI too prefer Flash,