Last but not the least 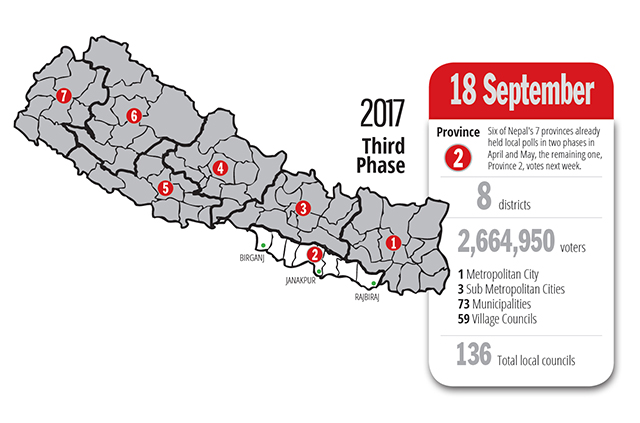 After much vacillation, the third phase of local elections is finally happening on 18 September. These were already important polls because the eight plains districts of Province 2 between Parsa and Saptari are electing local leaders to much more empowered municipalities and village councils for the first time in 15 years. But what makes the polls even more significant is that they will be a referendum on the issues raised by Madhes-based parties like the RJPN and the FSPN.

The battle for Birganj, Rameshwor Bohora

If the turnout is big and the NC, Maoist and UML dominate the votes, it will mean that the issues of federalism, regional autonomy, citizenship, delineation of constituencies and the use of Hindi language as raised by the Madhes-centric parties, were not of primary concern to the people of the Eastern Tarai.

If there is a massive turnout and a big win for the Tarai-based parties, then we should understand that those issues are genuine, and the RJPN alliance truly articulates the interests of the people of the eastern plains. However, if the turnout is low and the three mainstream parties are ahead, it would show that most Madhesi voters have not bothered to cast their ballots and do not believe in the new Constitution under which the polls are being held. Whatever the outcome, these elections have given the neglected people of the plains a say in their own destiny.

The very fact that this poll is going ahead is an indication that the Constitution has been endorsed. That Madhes-based parties are fielding some hill candidates and mainstream parties all have Madhesi candidates is a sign of better hill-plains integration. It was the Madhes-based parties’ disagreement with provisions in the new Constitution that delayed voting in Province 2. They refused to take part in elections unless amendments were made to the Constitution, but the polls are being held without those changes.

These polls are also a referendum on the UML’s nationalism platform. The NC, Maoists and the RJPN would like to erase the lead the UML built up in the other phases of local elections, and also make up for their own poor showing. A reasonably strong outcome in favour of the UML would carry a geopolitical message that the five-month blockade by India in solidarity with the agenda of the Madhes-based parties doesn’t have much support even in the Tarai. A UML defeat would prove that its anti-Indian rhetoric has backfired in the plains.

But most of all, the results of Phase 2 will be decisive in determining the political future of the RJPN which has been weakened by confusion and internal strife. There is also disgruntlement within the three big parties about the way tickets have been given out. Many who were not selected are standing as independent candidates, and may cut the votes their parties might have got.

Next week’s election is an opportunity for the people of the Tarai to send a strong message against the discrimination and disrespect they have suffered historically from exclusivist leaders in Kathmandu, and to reject the politics of patronage and corruption that have tainted the Madhesi leaders who claim to represent them.