Wining an election no longer guarantees accountability, voters will now decide based on achievement. 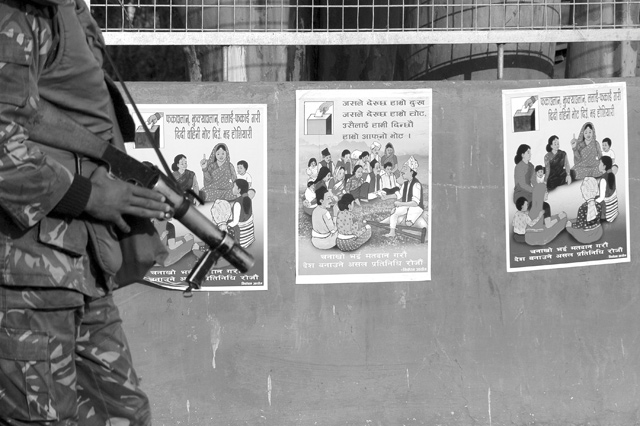 Despite the dramatic progress Nepal has made in public health, literacy and poverty reduction in the past two decades, it is clear that we would have done much better if we had our political act together.

Literacy rates have gone up, especially of women. The average lifespan of Nepalis has improved dramatically, with steep drops in child and maternal mortality rates. Nepal’s Human Development Index has been improving, and in the past ten years the Multi-dimensional Poverty Index has shown that the numbers of absolute poor has dropped from 70% to 40%.   The rise in female literacy has direct correlation with fertility rate, and Nepal’s annual population growth is down to 1.6% — which means that although the demographic transition and the youth bulge will mean the total population will keep growing for some time longer, Nepal has begun to defuse the population bomb.

All this despite a ruinous 10-year war, ten years of unproductive peace, chronic instability and dysfunctional governance. Just imagine how much further ahead we would be if we had not squandered the last two decades.

To be sure, these improvements are uneven. Parts of the country are doing much better than others, even though the quality of health care and education is still poor. Private hospitals and schools are not affordable for a majority of the population. Female literacy is stagnating, and the  dropout rate at Grade 5 is unacceptably high. Neo-natal mortality has been halved in the past two decades, but 20 babies out of 1,000 are still dying in the first four weeks of life.

The eyes of readers glaze over reading write-ups like these. We think health, education and the environment are ‘development’ subjects best left to INGOs and the UN. Yet, affordable and accessible health care is a matter of life-or-death for citizens, quality education for children is a priority for all parents -- hence it comes under the mandate of the state.

Improvement in service delivery is only possible with greater accountability and better governance. In other words, politics. This does not necessarily only mean political stability, but politics that ensures institutional continuity that gives direction and purpose to national plans.

Unfortunately, Nepal has been stuck ever since the conflict ended 11 years ago. The peace process has moved in fits and starts, politicking has impacted on development, economic growth, investment, and service delivery.

An inclusive constitution supposed to resolve this stalemate and allow us to make up for lost time was promulgated by a majority in the Constituent Assembly last year, but negotiations on amending sections of it dealing with future federal demarcations has been mired in short-term electoral calculations.

As we pointed out in this space last week, the three main parties are now a bhagbanda syndicate, and rule the country like a cartel. The traditional elite has been replaced with a greedy neo-elite that has honed rent-seeking into a fine art.

Structural corruption and appointments pre-paid by the highest bidder have reduced the impact of public spending on the one hand, while freezing capital expenditure on the other. There is plenty of cash around, it’s just that people in charge on deciding where to spend it don’t want to disburse unless they get a cut. Nepal is not poor, it is very poorly managed.

Crooks in high places over successive governments since 1990 (and many of them are still around, even though they have lost elections multiple times) have ensured that energy and highway projects that should have been completed in five years have taken 50.

The only way out of this rut is to hold elections, so that those with vision who have shown through their performance that they are for reform and action will be elected. Electoral legitimacy in Nepal’s democracy has failed to produce accountable leaders, the voters should be allowed to decide on performance. Who got rid of load-shedding? Who finished a delayed highway project? Who mplemented health insurance? Who helped improve the quality of education in government schools? Who gave migrants the choice to work in Nepal?

Let us start with civic elections by spring, and polls to provincial councils and the federal Parliament by the deadline of 18 January 2018. This is our last chance to set things right.

It's governance, stupid, Pradumna B Rana and Chia-yi Lee

There is a way out of these awkward spots, practice!
DEEPAK ACHARYA

"Even small countries have pride"

Deshantar, 11 March
Wow! It namely likewise fine treatise about JavaScript, babyliss pro curler I dissimilar Your post doesn't acquaint any sense. ray ban outlet uk if information are defined surrounded sketches one can effortlessly be versed with these. hollister sale I think a visualized exhibit can be better subsequently simply a effortless text, chanel espadrilles for sale that why it gives you improved quality. getnjloan.com Can you amuse forward me the code for this script alternatively interest distinguish me surrounded detail among relation apt this script? Vivienne Westwood online get a babyliss perfect curl Very soon this network sheet longing be outstanding among all blog viewers, isabel marant sneakers saleI too prefer Flash,