One month to go

Politicians agree to agree, sending a sense of cautious optimism about the constitution, but they need to settle their power struggle first 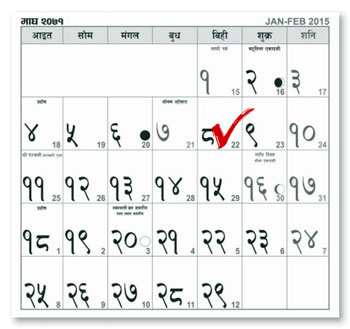 After a six-year pregnancy, the Constituent Assembly is finally ready to give birth. The contractions have started, and all it needs now is for one mighty push to get the baby out.

Confronted with the reality that the deadline is a month away, and faced with the prospect of destabilising uncertainty if the constitution is not passed by 22 January, the top leaders have suddenly woken up from deep slumber. What has goaded them on is that they suddenly appear worried about public opinion, and are apprehensive about what the electorate will say if they miss another deadline.

The other reason for the sense of cautious optimism in the capital is that the political parties have one by one sorted out their internal power struggles. Madhav Kumar Nepal and KP Oli have buried the hatchet in the UML, emboldened by the split in the Baidya faction Pushpa Kamal Dahal and Baburam Bhattarai have also patched up their differences for now. The Madhesi parties have distanced themselves from the UCPN(M) and revived their Madhesi Front.

After the Dialogue Committee under Baburam Bhattarai failed to present a viable compromise to the Assembly, there is no one else left to blame. CA Chair Subhas Nembang had had enough and summoned all top leaders to this chambers last week. He was uncharacteristically blunt in putting pressure on them to compromise on federalism and form of government. This prompted all sides to agree to agree on the remaining issues in the constitution.

Part of the reason that the obstacles to constitution-writing have suddenly been removed seems to be that a deal has been struck on the post-22 January power equation. It has been known for sometime now that the real reason for all the closed-door meetings at resorts was to decide whose turn it is to be prime minister after Sushil Koirala steps down post-constitution and who should replace President Ram Baran Yadav.

The UML’s KP Oli has anointed himself as Koirala’s successor, and we hear that certain other assurances of important portfolios have been made for leaders of other parties. The Bhattarai-Dahal dispute within the UCPN(M) was resolved after Dahal accepted Bhattarai’s leadership of the party in return for a promise to give him a post commensurate with this stature, viz: presidentship.

Leaders who used to emerge from meetings lashing out at opponents have suddenly started singing a different, more hopeful, tune. The most difficult issue on the constitution has been federalism, and after Nembang’s meeting Dahal indicated that he was willing to reduce the number of ethnically-demarcated provinces from 10, allow future provincial legislatures to decide on their names and an expert committee to decide on their boundaries. But the fly in the ointment is the fate of five districts in far-western and eastern Tarai – should they be a part of the Madhes or hill provinces? Again, the bone of contention here is not so much political devolution, but the ambitions of individual politicians who want to be warlords in those provinces.

Although Dahal is holding out for either a directly-elected president or prime minister, he is in the minority among the top parties who favour a reformed version of the current parliamentary system. Dahal is being offered a face-saving provision of electoral colleges at the provincial level, and some augmentation of presidential powers.

On electoral provisions, there has been a meeting of minds with only the proportion of candidates from the proportional representation list to be agreed upon. The smaller parties have been nervous about the threshold in future elections, and this is holding up an agreement on the election formula. However, since future legislatures will shrink from the current 601 it will automatically weed out parties that get less than a minimum number of seats, while leaving open their representation in provincial legislatures.

We have now come to that same point in May 2012 when all parties had agreed on these issues after the Hatiban Retreat, but the Maoists took to the streets leading to the dissolution of the CA. Let’s hope the constitution process will not be similarly aborted this time. And that it is not another false alarm.

"The clock is ticking"

Agreeing to agree, From the Nepali Press

Polka-dot leeches warm some researchers hearts
CARL ZIMMER
Wow! It namely likewise fine treatise about JavaScript, babyliss pro curler I dissimilar Your post doesn't acquaint any sense. ray ban outlet uk if information are defined surrounded sketches one can effortlessly be versed with these. hollister sale I think a visualized exhibit can be better subsequently simply a effortless text, chanel espadrilles for sale that why it gives you improved quality. getnjloan.com Can you amuse forward me the code for this script alternatively interest distinguish me surrounded detail among relation apt this script? Vivienne Westwood online get a babyliss perfect curl Very soon this network sheet longing be outstanding among all blog viewers, isabel marant sneakers saleI too prefer Flash,