It is one of the supreme ironies of our times that a country endowed with such rich hydropower potential has to import dirty energy from a neighbouring country. 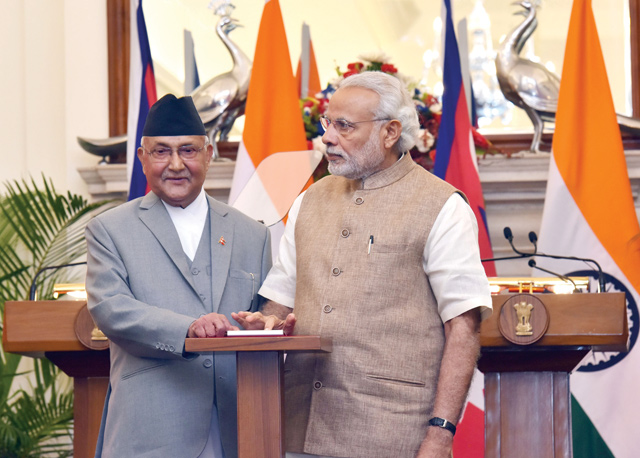 Besides attempting to normalise bilateral relations with New Delhi, the other big highlight of Prime Minister K P Oli’s India visit this week was the inauguration of the much-delayed Muzaffarpur-Dhalkebar electricity transmission line.

The agreement was greeted with applause from industry and individuals reeling this winter from daily 14-hour power cuts. So desperate are Nepalis to have adequate supplies of electricity, diesel, petrol and gas restored that we will welcome any deal that will partly alleviate our suffering. Which is why the transmission line agreement was greeted within the larger framework of improvements in India-Nepal relations and the lifting of the blockade.

We did have an ‘uh-oh’ moment, though, when we found out that the extra 80MW that will be added to the national grid will only reduce the load-shedding by two hours at the most. By next year when Nepal can import 600MW from the crossborder power line, however, it will represent one-third of Nepal’s total winter demand of electricity.

It is one of the supreme ironies of our times that a country endowed with such rich hydropower potential has been driven to the point where it has to import dirty energy from coal-fired plants from a neighbouring country. Eighty per cent of Nepalis still depend on biomass for energy, yet as this blockade showed, the country can be brought to a standstill if petroleum supplies are stopped.

Petroleum now makes up more than 60 per cent of our total imports, and together it is worth more than all our exports put together. The import of diesel alone grew three fold in the last five years, mainly due to the increased use of generators. One calculation shows that all the generators in Nepal put together feed some 500MW of captive power to households, offices and factories. The only reason we can continue to be able to pay for our rising fuel bill is because of remittances from Nepalis working abroad — the ‘sweat for oil’ barter arrangement.

The reason Nepalis have one of the lowest per capita footprints among low-income countries of 0.2 tons per capita is not just because our grid used to be entirely renewable hydroelectricity-based, but also because most Nepalis still use firewood for fuel. This will change as coal-based electricity is going to make such a big chunk of our national energy consumption.

Because we are starting from almost zero in fossil fuel use, this will still mean that Nepal’s carbon footprint will be negligible. The larger issue is one of the political failure that forced us to become dependent on India not just for petroleum but also for electricity.

The power shortage was a blessing in disguise because it fostered domestic entrepreneurship and allowed developers to build new minI-hydro plants in the 2-5MW range. Other larger projects with private investment got underway. There is now a crop of young Nepali engineers who have acquired experience and skills. But even if Nepal manages to generate more hydropower, the bottleneck has been transmission lines. Two transmission lines, one inside Kathmandu Valley and the other connecting Tama Kosi to Dhalkebar have been delayed for years due to local extortion.

The Muzaffarpur-Dhalkebar transmission line may bring us temporary and partial respite from power cuts, but it is the wrong power line in the wrong place. The argument given is that it will allow Nepal to import power for now, and we can export power to India through it when we have a surplus. This argument has two flaws: firstly the transmission lines links Nepal to the most power-deficient region of India. Which means whenever they have a shortage, which is often in the hot season, they are going to switch off those precious 80MW. And by next year when we are importing 600MW on that line, it is going to make Nepal even more vulnerable. Exporting power to India is a pipe dream, we must first plug our domestic energy deficit, address suppressed demand and then catch up with the 250MW that will be added to the demand every year in five year's time.

One of the silver linings of this blockade, we had argued back in September, was that it could force Nepal’s politicians to think about energy self-reliance and make an aggressive campaign to switch to renewable energy. Well, guess what, not only will we now be even less self-reliant, we will be dependent on India not just for oil but also for electricity.

And by being so dependent on fossil energy we will have lost our moral high ground at international fora to lobby for funds for climate change adaptation.

A new energy mix for a New Nepal, Suraj Panday

When the going gets tough, will deuba get going?
BINOD BHATTARAI

There are many geo-political uses for an overseas development aid budget.
DANIEL LAK
Wow! It namely likewise fine treatise about JavaScript, babyliss pro curler I dissimilar Your post doesn't acquaint any sense. ray ban outlet uk if information are defined surrounded sketches one can effortlessly be versed with these. hollister sale I think a visualized exhibit can be better subsequently simply a effortless text, chanel espadrilles for sale that why it gives you improved quality. getnjloan.com Can you amuse forward me the code for this script alternatively interest distinguish me surrounded detail among relation apt this script? Vivienne Westwood online get a babyliss perfect curl Very soon this network sheet longing be outstanding among all blog viewers, isabel marant sneakers saleI too prefer Flash,