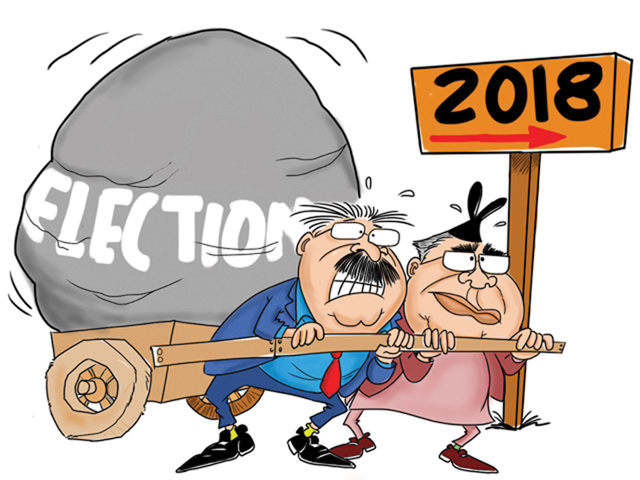 It is only now becoming clear how close Nepal and its democracy came to a fatal plunge last week as the executive and the judiciary faced each other off at the edge of the cliff.

Finally on Sunday, Nepal will start the arduous process of holding the first of three tiers of elections under the new constitution for Local, Provincial and Federal Councils.

Hopefully with greater accountability there will be rule of law, and confrontations like these will be rare in future.

The fountainhead (of all crisis), Dinkar Nepal

Never before in Nepal’s turbulent history, not even in the bad old days of the absolute monarchy, was the judiciary dealt such a severe knock. The fact that two alpha males of Nepali politics went for a constitutional instrument of last resort just because their fragile egos were dented, exposed just how shallow their commitment to democracy is. Going against every principle of the separation of powers, the executive branch got a lapdog legislature to hound the judiciary.

By blatantly undermining a judiciary which has played an activist role on transitional justice cases, the coalition elicited sharp criticism from the United Nations Office of the High Commissioner for Human Rights (OHCHR) among others.

The Supreme Court ruled on a writ petition on 30 April to reinstate Chief Justice Karki. Since then, both the coalition partners as well as the judiciary have pulled back from the edge – probably with the intention of not letting the dispute disrupt the first phase of local elections on 14 May. Parliament has been suspended till after elections and the impeachment motion shelved for now. The Chief Justice, for her part, has reportedly said she will not hear any more cases till she retires next month.

This unnecessary crisis had added another element of uncertainty to local elections but now that both sides have pulled back, voting will go ahead in three of the six provinces on Sunday. As our reports in this issue show (page 14-15), there is considerable anticipation among Nepalis that the first local body election in two decades will finally usher in an era of development and inclusion.

This is the first election under the new Constitution and the resulting village and municipal councils will have far more decentralised decision-making power on local revenue generation and budget than the VDCs and DDCs ever had. The nearly 4,000 VDC boundaries were designed for an age when Nepal was largely roadless and there was poor connectivity. The Maoists decimated elected VDC representatives during the conflict, and Deuba, during his second tenure as prime minister, cancelled scheduled local elections in 2002. Now, the new 481 village, 246 municipal and 17 metropolitan councils have the economic and political autonomy to use their economies of scale to fast-track development.

We have seen how the three-party political syndicate, in the absence of elected local bodies, has pocketed development grants and plundered rivers and forests with political protection over the past decades. There is now a danger that the politico-criminal nexus that profited from the lack of grassroots accountability is fielding candidates for village and municipal councils. Combined with the enhanced decision-making powers of local councils, this could spell disaster.

Our only hope is that people at the local level are far more aware of who the crooks are, and will judge wisely when they enter the voting booth on Sunday.

Correct alignment is essential for improving your game
DEEPAK ACHARYA
Wow! It namely likewise fine treatise about JavaScript, babyliss pro curler I dissimilar Your post doesn't acquaint any sense. ray ban outlet uk if information are defined surrounded sketches one can effortlessly be versed with these. hollister sale I think a visualized exhibit can be better subsequently simply a effortless text, chanel espadrilles for sale that why it gives you improved quality. getnjloan.com Can you amuse forward me the code for this script alternatively interest distinguish me surrounded detail among relation apt this script? Vivienne Westwood online get a babyliss perfect curl Very soon this network sheet longing be outstanding among all blog viewers, isabel marant sneakers saleI too prefer Flash,