“You just can’t turn the page. You have to read that page before you turn it.” 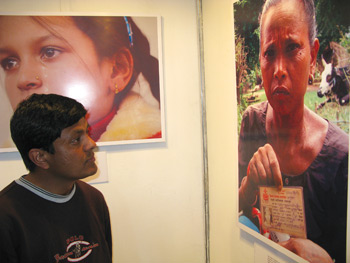 KUNDA DIXIT
Seven years ago this week, Kathmandu saw hundreds of thousands of people massing up in the streets against a king who wanted to turn the clock back to the era of absolute monarchy. From the other side, the Maoists were busy exterminating ‘class enemies’. Democracy was being squeezed from both the extreme left and extreme right. But what the Maoists could not achieve with ten years of war and 17,000 deaths, was achieved in 19 days of peaceful pro-democracy street protests that forced Gyanendra to step aside.

Whatever the glorifiers of violence and apologists for brutality may say, April 2006 represented a moral victory for peaceful political struggle. It proved that in this day and age one need not kill a whole bunch of people to bring about political change, even to remove a state that perpetrates structural violence.

The Maoists are not the type to say sorry, or admit that their ideology is obsolete and counterproductive. The question is how do we deal with the post-war legacy of violence, the simmering anger among survivors and relatives of victims, so as to help the healing process. How should we handle reconciliation in the aftermath of a conflict that neither side lost, and both want to forget?

Wars leave scars. The deep wounds take decades to heal. Twenty years later, Rwanda is still trying to come to terms with the abhorrent atrocities of its  genocide. The Tutsi leader who took over avoided retribution against Hutu mass murderers to help heal his country. South Africa took a similar step by naming and shaming rather than trying apartheid era crimes. Nelson Mandela’s famous maxim was to “forgive, but not forget”.

In Spain, an amnesty pact between Franco and the leftists protected a fragile democratic transition. But 40 years later, a survivor who is taking his torturer to jail told The New York Times this week: “I agree with the idea of reconciliation. But you just can’t turn the page. You have to read that page before you turn it.” Bangladesh and Cambodia have shown that sooner or later war crimes have to be addressed.

‘Reconciliation’, ‘transitional justice’, ‘truth’ may sound like donor vocabulary, but survivors everywhere need closure. They need to know what happened to relatives, why they were killed and by whom, and justice must eventually be served to prevent the wounds from festering. Every country takes its own path, and Nepal’s road to reconciliation should be much easier because ours wasn’t an ethno-separatist or religious strife, but a class war. There is much less bad blood, relatively less of a sense of revenge, but that doesn’t mean there isn’t a need for truth and reconciliation.

Collusion between former enemies led to the tabling of a bill in Parliament on Wednesday to set up commissions for truth and reconciliation and disappearances. The NC and the UML were glad to let the Maoists take the flak for obstructing the bills, but they aren’t pushing it much either. The Maoists, in characteristic fashion, blocked task force negotiations on parameters of the bills, while stalling parliament proceedings to protest delays that they were primarily responsible for. But all four main political groups are responsible for Wednesday's bill to white wash their past.

It is now meaningless to ask which side perpetrated a war crime. Both sides are now the state, and it is the state’s responsibility to deliver truth and justice to the families of Krishna Adhikari, Maina Sunwar, Dekendra Thapa, the Doramba 18, the Kotbara 35 or tens of thousands of others. Without truth and justice, these questions will remain irreconcilable.

How Maina was killed FROM THE NEPALI PRESS

Editorial in Rajdhani, 14 September
Wow! It namely likewise fine treatise about JavaScript, babyliss pro curler I dissimilar Your post doesn't acquaint any sense. ray ban outlet uk if information are defined surrounded sketches one can effortlessly be versed with these. hollister sale I think a visualized exhibit can be better subsequently simply a effortless text, chanel espadrilles for sale that why it gives you improved quality. getnjloan.com Can you amuse forward me the code for this script alternatively interest distinguish me surrounded detail among relation apt this script? Vivienne Westwood online get a babyliss perfect curl Very soon this network sheet longing be outstanding among all blog viewers, isabel marant sneakers saleI too prefer Flash,