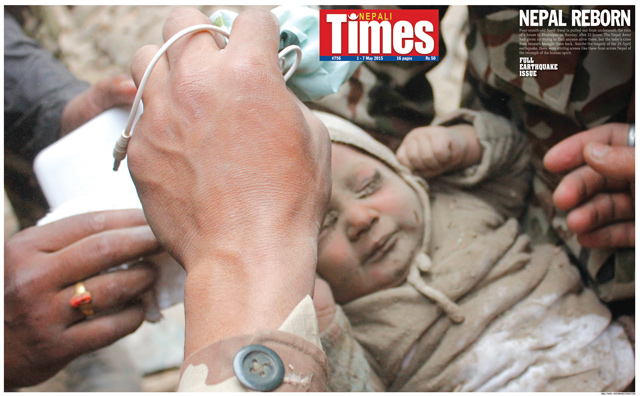 This month, as Nepal marks the second anniversary of the 25 April 2015 earthquake, we are reminded once again of that curious link between geology and geography. The earthquake was a result of the Indian subcontinent ploughing into and under the Eurasian landmass. Nepal is located along the rocky wreckage thrown up by this cataclysmic collision that started 70 million years ago and continues to this day.

The earthquake anniversary coincides with the visit to India by President Bidya Devi Bhandari, the continuing ambiguity surrounding preparations for the 14 May local elections, announcement by Tarai-based parties of a campaign to disrupt those polls, and contradictory signals from New Delhi about the Constitution. This is also the week that a contingent of the Chinese New Peoples’ Army is in Kathmandu for joint training with the Nepal Army. Although the two militaries have said officially that it is about counter-terrorism and disaster preparedness, there is some nervousness in Delhi about Chinese ‘inroads’ into Nepal.

Not to take the geological analogy too far, but the release of geo-tectonic tension along the Main Himalayan Thrust was mimicked by the pressure applied on Nepal by the Indian state in support of the Tarai movement against the Constitution promulgated in September 2015. The Indian Blockade came five months after the earthquake and lasted as long. It disrupted already delayed relief and reconstruction, ruined what was left of Nepal’s national economy, and set back development by a decade or more. Geo-political aftershocks of the Blockade were more devastating than geo-tectonic ones of the quake.

This 25 April, we must also introspect on the domestic politics that left Nepal vulnerable and unprepared for geopolitical and geological upheavals. Rulers wasted the peace dividend with never-ending squabbles, arguing about who got to form governments, how to conduct elections, about federalism and the Constitution. For the decade since the end of the war in 2006, Nepal has been governed by a political cartel that has demonstrated little accountability or concern for the welfare of people brutalised by war, natural disasters and political turmoil.

One of the primary factors in delayed relief and rehabilitation in the aftermath of the earthquake was the fact that local government units in the villages, districts and municipalities were staffed by bureaucrats instead of elected representatives of the people. This lack of local accountability had harmed overall development for the past two decades, but it became particularly acute after the earthquake – forcing more than a million survivors to still remain homeless. Which is why it is deeply puzzling to see the silence of the international community (which has usually been quite vocal in these matters) about the need for local accountability through elections.

Much more painful, however, is the fact that Nepal’s ruling class does not seem to have learnt any lessons either from the earthquake, or from the Blockade. There has been no progress in the bill to upscale the National Reconstruction Authority into a broader Disaster Management Agency. If reconstruction in the 14 districts affected by the earthquake has been slow, programs to prepare western Nepal for the Next Big One are virtually non-existent. The strategy of creating construction jobs at home to slow outmigration has remained just a dream. The grand goal to diversify Nepal’s import of petroleum and open alternative trade routes fizzled out.

Moral of the story: Stay calm, prepare for disasters and pay attention to (geo)politics.

A bad year for the Maoists, a good one for the president and the army, and status quo for the rest of the politicians
PRASHANT JHA

"I think there can be an agreement"

Unless our politicians internalise the lessons of 2010, we can expect a repeat performance
DAMAKANT JAYSHI
Wow! It namely likewise fine treatise about JavaScript, babyliss pro curler I dissimilar Your post doesn't acquaint any sense. ray ban outlet uk if information are defined surrounded sketches one can effortlessly be versed with these. hollister sale I think a visualized exhibit can be better subsequently simply a effortless text, chanel espadrilles for sale that why it gives you improved quality. getnjloan.com Can you amuse forward me the code for this script alternatively interest distinguish me surrounded detail among relation apt this script? Vivienne Westwood online get a babyliss perfect curl Very soon this network sheet longing be outstanding among all blog viewers, isabel marant sneakers saleI too prefer Flash,