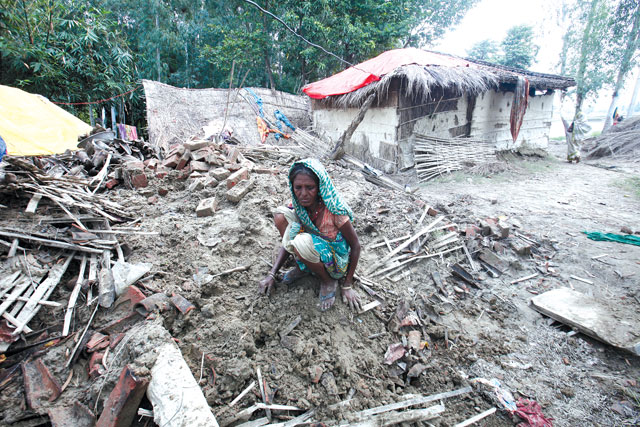 It will take a long time for the Eastern Tarai to recover from the floods that ravaged the plains in eight districts, affecting 20% of the country’s population.

At last count at least 50 people had been killed. Tens of thousands have lost their homes, granaries and standing crops have been destroyed, livestock has been washed away. As the waters recede, the true scale of the devastation is becoming evident. It will take years for the region to recover from this calamity, and because these are also districts with some of the highest rates of out-migration of young men, there is an immediate need for food and shelter.

It is a cruel irony that the worst-affected districts are also part of Province 2, where local elections are due in a week’s time. Had there been local elections, perhaps some of the poorly-planned infrastructure on floodplains in Nepal and across the border in India could have been prevented. The floods would not have been as bad, and the relief distribution would have been more fair and expeditious.

Elections are finally happening, but for the victims living in temporary shelters without food, water and clothes, it is too late. Amidst this devastation they are also preparing to elect their local representatives on 18 September.

As cynical politicians everywhere never let a serious crisis go to waste, candidates of various parties have predictably been promising rapid rehabilitation, and distributing token relief. The flood-hit people cannot offer even a glass of clean water to those canvassing hut-to-hut for votes because they don’t have any for themselves. The flood disaster has been closely followed by an epidemic of infections, with more than 50,000 people, mainly children, ill.

Every time politicians visit flood survivors asking for votes, the people should ask them a counter question: Why did you cause so much suffering for us?

The politicians have argued that this was a natural disaster, and to a certain extent there was record rainfall in the catchment area. But the people of the Tarai want to know why the politicians let the Chure range immediately upstream be denuded by loggers and sand-miners. Why was no thought given to drainage when roads and embankments were built? Why did no one discuss with India the construction of levees and elevated roads on its side of the border? And the most important question: what plans do you have to prevent such floods in future?

In a democracy, people can question their leaders and leaders must have answers. An election gives the people a chance to question their candidates directly, and voters in Province 2 are doing just that. The people can now hold their elected leaders accountable, and hopefully this will improve conditions in this neglected region.

While they are at it, the people are also asking candidates why they had to wait till 18 September to vote when the rest of the country cast their ballots months ago. What did they gain from the delay? The questions are especially pertinent to the Tarai-based parties like the RJPN and the FSPN.

Democracy, as it is said, is the worst system of government except for all the others. We have to make it work by putting leaders on notice that it is not enough to win votes. Their performance once in office will be closely watched.

'Between the cracks', Guest editorial

Leading from beneath, Sahina Shrestha

The NC and UML are dominated by failed and ageing alpha males from the past, it's time to make a clean break
RUBEENA MAHATO

Picking up the pieces after war

A novel shelter is helping children orphaned and injured during the conflict to rebuild their lives
SUNIR PANDEY
Wow! It namely likewise fine treatise about JavaScript, babyliss pro curler I dissimilar Your post doesn't acquaint any sense. ray ban outlet uk if information are defined surrounded sketches one can effortlessly be versed with these. hollister sale I think a visualized exhibit can be better subsequently simply a effortless text, chanel espadrilles for sale that why it gives you improved quality. getnjloan.com Can you amuse forward me the code for this script alternatively interest distinguish me surrounded detail among relation apt this script? Vivienne Westwood online get a babyliss perfect curl Very soon this network sheet longing be outstanding among all blog viewers, isabel marant sneakers saleI too prefer Flash,