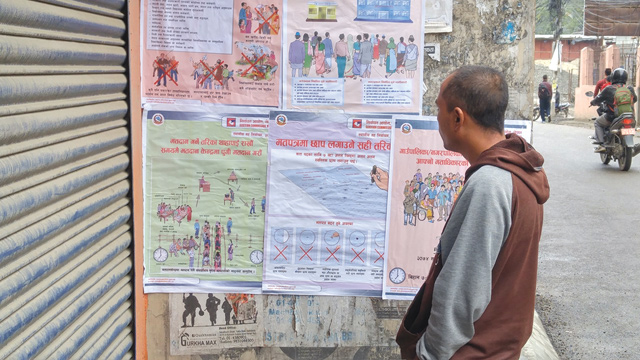 The proposed Rastriya Janata Party (RJP) and the Federal Alliance (FA) made a deal with the government last week over tabling an amendment in Parliament to pave the way for their participation in a two-phase local election in May-June. The alliance then suspended its protest campaign, did not waste time in registering with the Election Commission and applying for an election symbol. They are now on candidate selection spree for village and municipality councils. All this is positive, but we are not out of the woods yet. In Nepal we know it ain’t over until it’s over.

These are make-or-break times. After 10 years of war and 11 years of peace we are finally headed towards the first elections under the new inclusive Constitution. The quotas for women, Dalits and minorities in local councils mean that for the first time in Nepali history, the under-represented will be represented (see page 13).

Finally, this paves the way for the country to break free from the legacy of violence unleashed by the Maoists. When it looked that the conflict was going to be a stalemate, the comrades turned the class war into one for identity, ethnicity and regionalism, thus entangling the polity since 2006. Even if the abolition of the monarchy was indispensable in the new Constitution, one could argue whether a push for ethnicity- or territory-based federalism and secularism were necessary for that. The framers of the Constitution never bothered to understand that secularism was equated with godlessness by a majority of Nepalis. We could have saved ourselves a lot of heartache if we only it was translated as ‘freedom of religion’.

That is all in the past. But it may be important to learn from those miscues now that we have a breakthrough of sorts. Saturday’s agreement still has kinks. The UML pressured the government on Wednesday to withdraw the amendment bill because of a provision on adding village councils in the Tarai to reflect the population, provisions on the electoral college and rules for naming provincial assemblies. The RJP and the FA reacted by threatening to resume their agitiation. They now have misgivings about whether the government is willing, or capable, of tabling the promised ‘fast-track’ motion for amendments. There is nothing in writing yet.

Even so, there is no backing down despite the new deadlock. From here on, any future political disagreement should not be a zero-sum-game to be thrashed out on the streets, but settled in Parliament through civilised politics.

The ball is in the government’s court. As the ruling coalition it has the responsibility to address grievances through compromise – that would be a win-win-win for all parties. Prime Minister Dahal would get a much-deserved feather in his cap, the opposition would no longer be seen as a spoilsport, and the Madhes-based parties would rise above territorial and ethnic identity to be a national alliance.

"In my father’s footsteps"

Many are called, few are chosen.
JAMLING TENZING with RAJENDRA S KHADKA

A voice for liberation
MANJUSHREE THAPA

How Ani Choying Drolma honours and aids her sangha.
Wow! It namely likewise fine treatise about JavaScript, babyliss pro curler I dissimilar Your post doesn't acquaint any sense. ray ban outlet uk if information are defined surrounded sketches one can effortlessly be versed with these. hollister sale I think a visualized exhibit can be better subsequently simply a effortless text, chanel espadrilles for sale that why it gives you improved quality. getnjloan.com Can you amuse forward me the code for this script alternatively interest distinguish me surrounded detail among relation apt this script? Vivienne Westwood online get a babyliss perfect curl Very soon this network sheet longing be outstanding among all blog viewers, isabel marant sneakers saleI too prefer Flash,