Federalism is looking fraught, it may be wiser to address exclusion in the new constitution but leave state restructuring for later

In the political roller coaster ride we are all in, many of us haven’t fully taken in the implications of the results of the 2011 census for the new constitution. Last week’s Dasain holidays bore out some of its findings. Kathmandu’s registered population in the census was 2,517,023, with a floating population of about 1 million which roughly corresponded with the police’s estimate of the numbers that left Kathmandu for the holidays.

The main flaw of the census, as was pointed out when the results were announced last year, was that it did not count the absentee population away for more than six months. This cutoff essentially disqualified from the total the estimated 4 million Nepalis who are away at any given time. By putting Nepal’s population at 28.412 million, we undercounted the total by 1.9 million according to the Census Bureau. Of these, 1.1 million were from the hills and 800,000 from the Tarai, 1.7 million were men and 200,000 women. But even the undercount is an undercount because many Nepalis working long-term in India (estimated at 2 million) were most likely excluded in 2011. What this means is that all extrapolations on gender ratio, annual population growth rate, or the proportion of population in the Tarai are probably off by a wide margin. 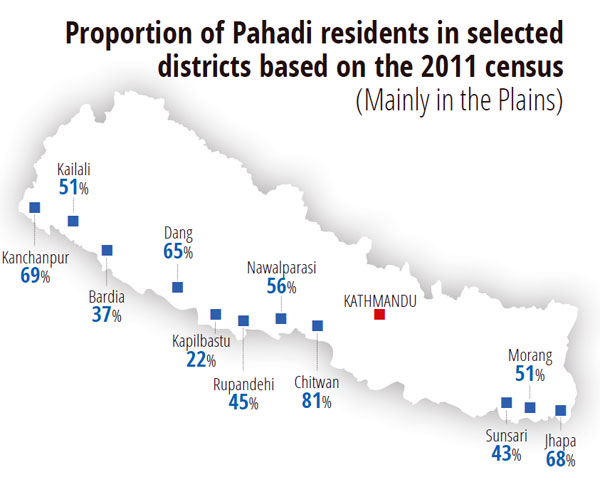 For instance, based on a total population calculation of 28.412 million, we concluded in this space two years ago that Nepal had defused its population bomb by bringing down the population growth rate in the past decade to 1.3 per annum. Of the missing population in the census most are men, which means females do not outnumber males as the census results, at first, seemed to infer. Also, since most of the absentee population is from the hills, the actual Tarai population in 2011 was still slightly less than the hills. If Nepal’s actual population (counting migrant workers) was nearer to 32 million in 2011, then the conclusions need to be revised.

The fertility rate does seem to have fallen. And the ongoing exodus from the midhills means that some districts have been depopulated by up to one-third compared to 10 years ago. Also, the youth bulge would be even wider if the young absentee population is counted.

These corrected census results have serious implications for the debate on federalism that has stymied constitution-writing. As Norwegian economist Magnus Hatlebakk of the Christian Michelsen Institute concludes in a recent article in the portal setopati.com only 14 of the 75 districts have a majority from a single ethnic group.

Hatlebakk has counted Brahmins and Chhetris separately, but if one lumps them together it is clear that a majority of the districts have a hill caste majority, meaning that many of the proposed federal provinces will not have a majority from the ethnicity they are named after.

His analysis indicates ‘a clear conflict between economic viability and ethnic federalism’ and that ‘no hill ethnic group will have a majority in any (proposed) province’. The situation in the Madhes, which some politicians have tried to portray as a monolithic and homogenic region, is even more fragmented.

Take the 2011 census breakdown for Kathmandu Valley, which would be a part of a future Newa-Tamsaling province. Nearly half the population of Kathmandu district is composed of the Brahmin, Chhetri, Thakuri, Sanyasi combine. It is 33 per cent in Lalitpur and 35 per cent in Bhaktapur. In the Tarai districts which would be part of one of the proposed Madhes provinces, the concentration of Pahadi people is even higher: 81 per cent in Chitwan, 68 per cent in Jhapa, and 70 per cent in Kanchanpur.

The demand for ethnicity-based federalism stems from centuries of feudal neglect, centralisation, and the domination of hill caste groups of Nepal’s politics and economy. This needs to be set right. However, as the census shows, carving Nepal up with new internal federal boundaries is fraught. The challenge for the next four months to constitution deadline is to find a balance that doesn’t leave any party aggrieved.

If it looks too fragile to handle now, it may be wiser to address exclusion in other ways and leave state restructuring for later.

Incense business empowers villages in Birgunj
SURESH RAJ NEUPANE and NABIN JHA
Wow! It namely likewise fine treatise about JavaScript, babyliss pro curler I dissimilar Your post doesn't acquaint any sense. ray ban outlet uk if information are defined surrounded sketches one can effortlessly be versed with these. hollister sale I think a visualized exhibit can be better subsequently simply a effortless text, chanel espadrilles for sale that why it gives you improved quality. getnjloan.com Can you amuse forward me the code for this script alternatively interest distinguish me surrounded detail among relation apt this script? Vivienne Westwood online get a babyliss perfect curl Very soon this network sheet longing be outstanding among all blog viewers, isabel marant sneakers saleI too prefer Flash,