In the enthusiasm for infrastructure and hydroelectric projects, let’s not forget the dangerous geology of the Himalaya 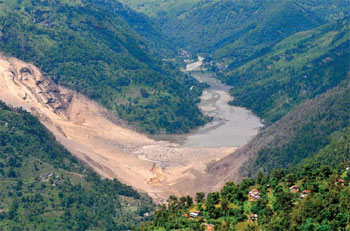 DINESH GOLE/NAGARIK
During Narendra Modi’s speech to parliament on 3 August, we were treated to the supremely ironical sight of political leaders who have ruled Nepal for the past 20 years thumping tables to cheer lustily as India’s prime minister told them what they hadn’t done in that time to make Nepal prosperous.

Modi sold us a dream. It was a vision of growth and co-prosperity from sharing Nepal’s natural resources more equitably. His main mantra was connectivity: building physical and virtual highways and transmission lines to trade hydro-energy. And as if to prove just how far behind we are in our thinking, we got Modi to launch a postage stamp.

Nevertheless, as we had hoped in this space last week, the visit has revived the 6,500 MW Pancheswor storage project on the Mahakali River which was mothballed 18 years ago. Researchers can do PhDs on Pancheswor as an example of why joint water projects are stuck: one political faction in Nepal preventing another from taking credit, mutual distrust, misplaced nationalism, and asymmetry in negotiations.

After the euphoria of utopia from the Modi visit, hard reality has set in. How is officialdom now going to take things forward on Pancheswor, the Indo-Nepal Power Trade Agreement, or the project development agreement with GMR for Upper Karnali when two rent-seeking states are inhabited by the same babus?

It was as if to remind us of the hazards of infrastructure planning in the Himalaya that on the eve of the Modi visit, a massive slope failure over the Bhote Kosi blocked the river. An estimated 150 people perished, the impounded lake threatened downstream populations, and the country’s major trade and tourism artery to Tibet was cut.

As chief minister of Gujarat state, Narendra Modi was the downstream beneficiary of the controversial Narmada project. The issues of equity and justice of the mammoth trans-state scheme delayed the Sardar Sarovar reservoir for many years. But within 20 days of becoming India’s prime minister, Modi decided to raise the dam height by 17 metres.

We are now looking at the possibility of at least a half dozen Narmadas coming up in the Nepal Himalaya. And whereas questions about Narmada were mostly about social justice, in the Himalaya we have additional questions of economic and environmental cost, climate change, seismicity and the frequency of major flood events.

Nepal is the most densely populated mountain nation in the world. And most of the country’s hill population lives in river valleys which are also the only areas with surplus food production because irrigation allows multiple cropping. Submerging Nepal’s valleys would mean enormous socio- economic dislocation.

The Himalaya is also the youngest mountain range on the planet, and its fragile southern slopes have heavy rates of precipitation making them prone to flashfloods of the kind we saw in Uttarakhand last year, and valley-blocking landslides like Bhote Kosi. Climate change has made all this even more unpredictable: dozens of swollen glacial lakes are on the verge of bursting, monsoons have become erratic with cloudbursts and unseasonal blizzards.

It is best not to underestimate the dangers of Himalayan geology, and the fury of its rivers. Future urban planning, design of infrastructure and hydropower projects have to factor in the risk of floods of biblical proportions. For example, had Pancheswor been built ten years ago as planned, how would it have fared in last year’s once-in-a-lifetime flood on the Mahakali?

The Bhote Kosi has four small and medium-scale hydroelectric plants, and three more are planned. The bursting of a landslide dam would have wiped them all out within minutes. The most worrisome is the spread of dense settlements along river-hugging highways, like Lamosangu and Dolalghat where there were stampedes last Saturday as word spread of the landslide blocking the river.

But we cannot do without energy, roads and bridges. It is prudent not to place all our infrastructure eggs in one basket, better to go for many medium-sized schemes and spread them out than one large one. Disasters are just waiting to happen, and we cannot completely remove risk. The idea is to minimise it.

"Condom" has become a household word, but are people using it?
BHAGIRATH YOGI
Wow! It namely likewise fine treatise about JavaScript, babyliss pro curler I dissimilar Your post doesn't acquaint any sense. ray ban outlet uk if information are defined surrounded sketches one can effortlessly be versed with these. hollister sale I think a visualized exhibit can be better subsequently simply a effortless text, chanel espadrilles for sale that why it gives you improved quality. getnjloan.com Can you amuse forward me the code for this script alternatively interest distinguish me surrounded detail among relation apt this script? Vivienne Westwood online get a babyliss perfect curl Very soon this network sheet longing be outstanding among all blog viewers, isabel marant sneakers saleI too prefer Flash,