The obstacle to framing a new constitution is not just federalism. Pushpa Kamal Dahal also needs to ensure he has immunity from prosecution for war crimes and embezzlement of state funds meant for his guerrillas. 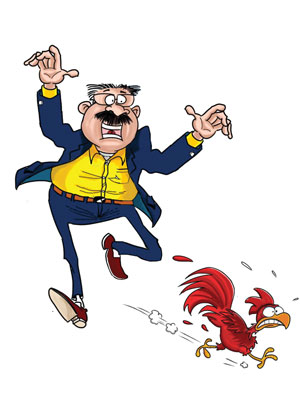 DIWAKAR CHETTRI
Readers following what was happening in Nepal earlier this week on social networking sites were in for a big surprise. It wasn’t, as one might have expected, news and pictures of flying furniture on the floor of the Constituent Assembly that was trending, but Nepal’s dramatic victories over The Netherlands and Canada in the ICC League Division Two cricket tournament in Namibia.

Just goes to prove the point that although the capital and towns across Nepal were terrorised off the streets by strikes, and the national media splashed photographs of CA members throwing chairs around, most Nepalis couldn’t be bothered about the debate over the content of the new constitution. This apathy was also reflected in the Himalmedia Public Opinion Survey, the results of which were published in this paper last week.

The vandalism on the floor of the Constituent Assembly on Monday night, would have made a jaded public even more cynical about the shenanigans of the opposition. It has been eight years since the Maoists descended from the mountains to join the political mainstream, but the comrades still haven’t weaned themselves from their tactics of intimidation and violence.

The opposition 31 parties are being led by one man’s paranoia about the wages of sin. The obstacle to framing a new constitution is not just federalism. It is also Pushpa Kamal Dahal’s need to ensure that he has immunity from prosecution for war crimes and embezzlement of state funds meant for his guerrillas. And he can only have that immunity if he is president. There is also the strategic interest of neighbours about how future provinces will affect river projects on the Kosi and Karnali. That is what the behind-the-scene bargaining till the last moment on Thursday was all about.

Having lost in the elections of November 2013, and with his party in tatters, Dahal has been playing the identity card and trying to foment discord and disharmony for support. Had he read the writing on the wall (84% of those polled in the Survey were against his shutdowns) he would have understood that such tactics don’t work in Nepal anymore. But he doesn’t care because he derives his power now from his nuisance value. The people are fully aware that this is a desperate attempt by the Maoist party to be relevant, and they are using the only language they have ever known: terror and violence.

After seeing the tidal wave of negative feedback on social media and in the press, the party partly backtracked on Wednesday by admitting that “lapses” had occurred. This debate is not, as some members of the international community and pink idealists seem to naively believe, about an inclusive constitution. Things are much murkier beneath the surface.

Piecing together events leading up to Monday night’s showdown, it is now clear that both sides were playing brinkmanship. The NC-UML coalition, egged on by hotheads within the two parties and frustrated by Maoist backtracking and stonewalling, had been trying to use their combined strength to unilaterally bulldoze through a constitution draft. There was no way the Maoist-Madhesi alliance of smaller opposition parties, which have been cornered, would allow this to happen without losing face.

The lesson for the future of constitution-writing is that this has to be a two-track process governed by both a spirit of consensus and political consultation. The terms ‘give-and-take’ and ‘win-win’ have become so threadbare with overuse that they don’t mean anything anymore, but they are important nevertheless. Only through compromise can a new constitution be written. All indications are that those compromises were within reach in meetings on Sunday evening, and there was optimism in the air.

Something happened that night that made the Maoist-led alliance to backtrack. And it was probably the Dahal factor. The NC-UML then started preparing the process of voting point-by-point in the CA on the draft, when pre-designated Maoist CA members ran amok in an exercise of calculated mayhem. There is no doubt that this was premeditated, deliberate and desperate attempt to stop a constitution with feigned righteous indignation over exclusion.

The 22 January deadline was an anti-climax, the question now is how best to salvage the constitution from the political wreckage of the CA. The only way forward is to continue the dialogue, draw out a realistic new CA timetable for the first draft to be ready, say sorry to the people, and not give in to blackmail by former revolutionaries who will stop at nothing.

It's easy to lambast politicians, but the current crop are under extreme pressure right now
PRASHANT JHA

In India vs Kantipur in June, the truth was never  adequately explained to readers
CK LAL

We need to find a way to change the system, not the players
ASHUTOSH TIWARI
Wow! It namely likewise fine treatise about JavaScript, babyliss pro curler I dissimilar Your post doesn't acquaint any sense. ray ban outlet uk if information are defined surrounded sketches one can effortlessly be versed with these. hollister sale I think a visualized exhibit can be better subsequently simply a effortless text, chanel espadrilles for sale that why it gives you improved quality. getnjloan.com Can you amuse forward me the code for this script alternatively interest distinguish me surrounded detail among relation apt this script? Vivienne Westwood online get a babyliss perfect curl Very soon this network sheet longing be outstanding among all blog viewers, isabel marant sneakers saleI too prefer Flash,