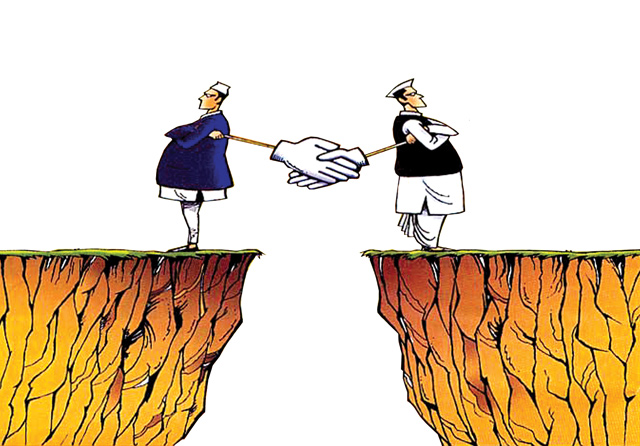 A lot of words have appeared in the press about the India-Nepal impasse that has led to a near-total border blockade for more than a month. The entire drama is also being played out on social media platforms.

The situation has degenerated into abusive name-calling from Nepalis with not only a false sense of bravado but hurt victimhood and ultra nationalism. And India is behaving like an overbearing bully with a crude and cruel attempt to throttle a petulant neighbour with disproportionate muscle-flexing.

For Nepalis the most glaring aspect of this entire sordid chapter in our nation’s history is a lack of preventive proactiveness and a sense of urgency that were needed to stop the situation from getting so out of hand for this long. The mishandling of the domestic political fallout of the ‘fast-tracked’ constitution, the inability to contain the violence from spiralling out of control in the plains, the excessive use of force in quelling the riots, and misconstruing Delhi’s signals were what led to this crisis.

In their haste to make up for bungling post-earthquake reconstruction, politicians of the NC, UML and the UCPN(M) decided to push through a constitution, any constitution, that would pave the way for a national unity government. This strategy was driven by the political ambitions of two individuals: the UML’s K P Oli and the UCPN(M)’s Pushpa Kamal Dahal. The NC did a volte face on its commitment to the power swap deal and goofed up so badly on so many fronts that it would take too long to list them all here. None of the Big 3 parties is capable of multi-tasking, and they were so distracted by the election of the new  president and vice-president that negotiations with Madhesi groups about constitutional amendments were unnecessarily delayed.

Because the crisis has been allowed to ferment for so long and by not understanding the political dynamics in Delhi that drove the intervention, the whole thing is now knotted up, making it difficult to untangle. There are layers upon layers of issues: bruised egos of politicians and bureaucrats in Kathmandu, New Delhi, Birganj and Janakpur; the increase in Madhesi demands for amendments from eight to 102; the need for Madhesi leaders to launder their image; cross-border sensitivities heightened by state elections in Bihar; the ultra-nationalism of the Kathmandu ruling class; Delhi’s historical geopolitical interest in ensuring a pliant Nepali state through swing votes in a Madhes buffer; paranoia in India about Chinese inroads into Nepal.

Instead of trying to assuage an insecure Big Brother, our rulers are in the habit of constantly enraging it by flashing the China card. As India’s largest trading partner, China is unlikely to risk antagonising India over Nepal. But sections of the Indian establishment, egged on by hysterical media coverage, have latched on to China’s symbolic donation of 1,000 tons of petroleum as if it represents a declaration of war against India. Beijing obviously enjoys seeing India squirm in a quagmire of its own making, but that is not to say that it will upset its Himalayan spheres-of-influence accommodation with New Delhi.

It doesn’t make sense for Nepalis to get all worked up about India’s stranglehold. It is our own doing. For the past 60 years we have only talked about our hydropower potential, and haven’t even harnessed 0.2 per cent of it. We have gone from being a net exporter of food grains to importing everything from garlic to gladioli from India. What have we done to proactively entice investors to create jobs at home? Far from being self-reliant in energy and exporting power to India, Nepal now spends more than 60 per cent of its total import bill on buying petroleum from India, and its volume has grown threefold in the last five years. We have done precious little to diversify our imports, and be more self-reliant.

This crisis is a result of the incompetence of rulers of Nepal over the years, and the shortsightedness of a bunch of mean and arrogant Babus in New Delhi. We got a tantalising glimpse of a generous and friendly India last year during the visit here by Prime Minister Narendra Modi, one that rebooted relations for mutually-beneficial cooperation. But all that goodwill has now been squandered by decision makers in New Delhi who have callously turned an entire generation of Nepalis against India. This is a lose-lose for both countries. From here on, any Indian investment or joint river project will be much more difficult to implement because of hostile public opinion.

There are three steps Nepal’s new rulers should take:

Short term: Do whatever it takes to end the blockade. We can’t eat nationalism.

Medium term: Jump start the economy. There is just too much politics.

The unions need to realise that while Nepal is a beautiful place, it's not the only one accessible to tourists
FOO CHEE CHANG

Girija Prasad Koirala passed away at his daughter's home this morning after going into a coma.
KUNDA DIXIT
Wow! It namely likewise fine treatise about JavaScript, babyliss pro curler I dissimilar Your post doesn't acquaint any sense. ray ban outlet uk if information are defined surrounded sketches one can effortlessly be versed with these. hollister sale I think a visualized exhibit can be better subsequently simply a effortless text, chanel espadrilles for sale that why it gives you improved quality. getnjloan.com Can you amuse forward me the code for this script alternatively interest distinguish me surrounded detail among relation apt this script? Vivienne Westwood online get a babyliss perfect curl Very soon this network sheet longing be outstanding among all blog viewers, isabel marant sneakers saleI too prefer Flash,