After breaking the political deadlock this week, the main parties need to move swiftly on their checklist 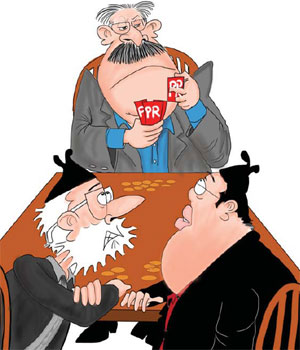 DIWAKAR CHETTRI
On the face of it, we must applaud the agreement containing four bullet points by the four main political forces on Tuesday. The agenda items deal with finishing a draft of the new constitution within six months and passing it within one year, ensuring closure of the remaining points of the peace process, setting up the Truth and Reconciliation and Disappearance Commissions, and investigating alleged irregularities in the November elections.

The agreement, although unnecessarily delayed, opens the door now for the next steps. There is nothing in the four-point deal struck on Tuesday that had to wait a month after elections. The UCPN (Maoist) are entirely responsible for the loss of time and momentum, a behaviour we are now familiar with and have come to expect of them.

The checklist for the next few weeks is as follows:

** Each party must finalise its Proportional Representation list and pass that on to the Election Commission for verification. The PR mechanism was designed to make the Constituent Assembly representative, but has been hijacked by the main parties who tend to nominate members to balance disgruntled internal factions. Every party, including the emergent RPP-N, faces fierce pressure from the rank and file to be ‘rewarded’ with CA membership.

** The Interim Electoral Council will then have to decide on 26 names for the nominated list in the CA. This, again, is a process to allow under-represented communities to be in the CA and also to bring in the expertise of lawyers, demographers, and social scientists. The cabinet will have to consult the political forces, but should not be dictated by them in finalising the list.

** Once the 601-strong membership of the new House is worked out, the Election Commission will vet it and concurrently ask the prime minister and the president to convene the Constituent Assembly and parliament respectively. The chairman and other legislative officials need to be chosen.

** Only then will the president ask the parliament to set up a government, either made up of a coalition or a consensus.

** New government is set up to take the country forward and revive stalled development.

** Get all party agreement to conduct local elections by April 2014.

This roadmap may appear straightforward, but it is fraught with pitfalls every step of the way. The four main political forces may have papered over their differences in the High Level Political Mechanism with their agreement this week, but they each face internal challenges to finalise the PR lists. Which is why the parties have asked for another extension of the deadline till 30 December. The HLPC, given its track record, will try to interfere in the nomination of the 26 extra members. Then there remains the daunting task of cobbling together the new government. Let’s not expect a new CA and government before February.

Tuesday’s four-point deal may have been needed to break the logjam, but it is an inherently undemocratic exercise that falls into the same trap as the last CA of bypassing an elected legislature and retaining the monopoly on power by a handful of elderly men striking murky backroom deals.

That the Nepali Congress and UML so easily acquiesced to allowing the HLPC to be an extra-constitutional and unaccountable power centre is a pity. It shows they have still not learnt from the debacles of the past. It also proves that the UCPN (M), smarting from its electoral defeat and ridden with internal rifts and contradictions, wants a handle on power to compensate for its poor showing in polls.

The HLPC should be an advisory body and major decisions should be taken by the parties on the strength of their mandate from the people. That is what democracy is supposed to be all about.

Extrapolate human nature to the international security system and you will discover how easily power seeks to match power.
PUSKAR BHUSAL

Political leaders appear as clueless as the rest of us when it comes to what happens next.
PUSKAR BHUSAL
Wow! It namely likewise fine treatise about JavaScript, babyliss pro curler I dissimilar Your post doesn't acquaint any sense. ray ban outlet uk if information are defined surrounded sketches one can effortlessly be versed with these. hollister sale I think a visualized exhibit can be better subsequently simply a effortless text, chanel espadrilles for sale that why it gives you improved quality. getnjloan.com Can you amuse forward me the code for this script alternatively interest distinguish me surrounded detail among relation apt this script? Vivienne Westwood online get a babyliss perfect curl Very soon this network sheet longing be outstanding among all blog viewers, isabel marant sneakers saleI too prefer Flash,