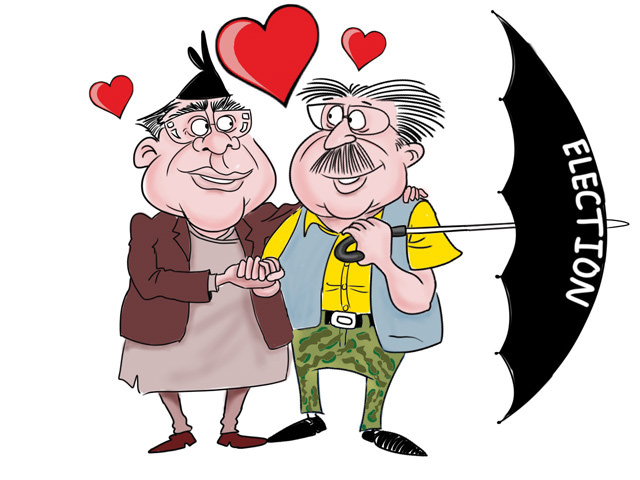 Nepal has been ruled by a three-party syndicate after the end of the conflict in 2006, and throughout the decade-long transition after that. The main men in the major parties made all important decisions on power-sharing from behind closed doors, bypassing Parliament and even their own central committees.

Well, it looks like nothing has changed. The same men from the same parties are still playing parlour games. This week, two months after the election results became clear, the lameduck prime minister finally stepped down and the two communist alpha males have decided to co-chair their united party, and rotate the prime ministership. There is no precedent and no such provision: they just decided secretively to go ahead with it in a meeting at a private contractor’s home in Man Bhawan on Tuesday, while the country was on a Shivaratri holiday.

The announcement of a Left Alliance between the UML and the Maoists just before elections last year was a political masterstroke. It ensured a near two-thirds majority for the combined parties in Parliament. The other part of their agreement was to formally unite the parties, and that has turned out to be much more difficult. The unity was supposed to happen before government formation, but now looks like it is going to be pushed back.

The NC which lost the election was in no hurry to hand over power to the winners. In fact, the NC-led coalition used the lengthy interregnum to spend lavishly and make illicit appointments to official positions. What was even more surprising is that the UML-Maoists were not in any particular hurry either to assume office.

There were many reasons for this: the Election Commission not formally announcing the final tally of the National Assembly elections till this week. This gave the three-party cartel all the justification it needed to indulge in its favourite pastime of playing political musical chairs.

For their part, the UML’s prime minister-in-waiting KP Oli and the MC’s Pushpa Kamal Dahal anyway needed more time to haggle over the composition of the new government as well as the terms and conditions for party unity. This, in turn, provided the caretaker NC-led coalition the opportunity to cling on to power and make non-caretakerish decisions on spending and appointments. (Even as it prepared to leave office, the Cabinet awarded Rs5 million of taxpayers’ cash to a well-to-do outgoing minister for medical treatment.)

Finally, now that both the Lower and Upper Houses are duly constituted, Oli and Dahal have their band fand ironed out, we can have a new government. After K P Oli was sworn in Thursday as prime minister, the Left Alliance will form the new government and to make it look inclusive will try to include women, Madhesi and Janajati figures. The Madhes-based FSPN and the RJPN have so far refused to join coalition without a firm promise on constitutional amendments, but some within those parties look sorely tempted by portfolio lollipops dangled in front of them by the wily Oli.

It was a foregone conclusion that Oli would be prime minister again, what is less foregone even now is whether his party can in fact unite with the Maoists. Oli and Dahal are so used to not keeping their word and stabbing each other in the back that it is perfectly possible that this is just going to be a coalition government of the UML and Maoists without actual party unity.

Some have argued that the Maoists need unity more than the UML. There are grumblings within the UML about a democratic party having to subsume a party that has still not atoned for the violence it unleashed on the land. Some leaders in the Maoists, like Krishna Bahadur Mahara and Barsha Man Pun, insisted till the end that Dahal should not agree to unite unless the party was given either one of the executive positions: prime ministership or chairmanship of the joint party. So they agreed to share both positions.

That is what it has come down to: if you can't agree, rotate. There are also other positions to haggle over: will the President and Vice-president stay on, or be replaced by aspirants like Jhalnath Khanal and Mahant Thakur?

So far, the portfolio distribution and the allocation of chief ministerships of the provinces have gone fairly smoothly along the agreed 60:40 formula. Party unity, if it does happen, will be more fraught.

What the Nepali people are now really waiting for are signs that the UML and Maoists separately, or together, will deliver on their election promise of stability and prosperity. So far, with the only sure deal that Dahal will succeed Oli as PM, it does look like politics is business as usual.

Kantipur, 28 March
Wow! It namely likewise fine treatise about JavaScript, babyliss pro curler I dissimilar Your post doesn't acquaint any sense. ray ban outlet uk if information are defined surrounded sketches one can effortlessly be versed with these. hollister sale I think a visualized exhibit can be better subsequently simply a effortless text, chanel espadrilles for sale that why it gives you improved quality. getnjloan.com Can you amuse forward me the code for this script alternatively interest distinguish me surrounded detail among relation apt this script? Vivienne Westwood online get a babyliss perfect curl Very soon this network sheet longing be outstanding among all blog viewers, isabel marant sneakers saleI too prefer Flash,