Dying, to make a living

In a world numbed by senseless violence and tragedy, this week we were once more reminded of the hierarchy of news 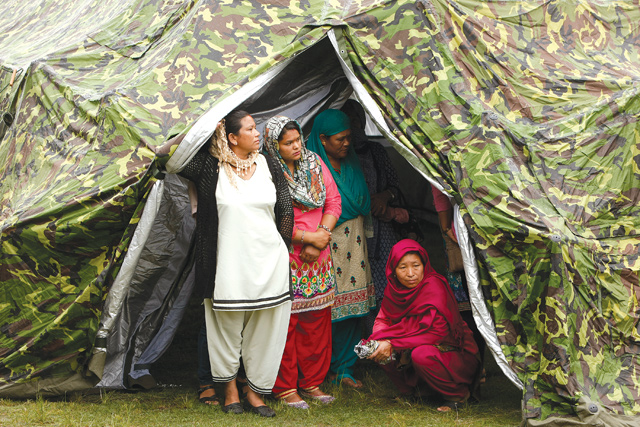 Bikram Rai
WEIGHTY WAIT: Relatives of the Nepalis killed in Kabul wait in an army tent at Kathmandu airport on Wednesday for the bodies to arrive.

Turmoil and terrorism have engulfed the crescent stretching across from Pakistan, through Iraq and Syria to Libya. But although they seem a world away from Nepal, the reality was brought home once more with the tragic deaths of 13 Nepali citizens in the bus bombing in Kabul on Monday.  Yet again, families in Nepal grieved for sons killed in a distant land.

We are repeatedly reminded of the fragility of Nepal’s remittance-driven economy. More than half of the four million Nepalis working abroad are situated in the volatile Gulf region. The migrant economy now accounts for nearly one-third of the country’s GDP, and it is the blood, sweat and tears of our workers, and the money they send home, which sustain their families and keep Nepal’s economy afloat.

In 2004, 12 Nepali workers were taken hostage by Islamists in Iraq and executed in cold blood. At least a dozen Nepalis — most of them private security guards or soldiers with the British Army — have been killed in Afghanistan in the past decade.

This week’s attack on Nepalis guarding the Canadian Embassy in Kabul caused the most serious loss of life, and underscores the fact that Nepalis are literally dying, to make a living. Such is the desperation for jobs and for a better life, that Nepalis are one of only a handful of nationalities willing to put themselves in harm’s way in risky jobs that no one else will accept.

Fatalities involving NATO troops in Afghanistan have fallen due to cutbacks, but also because Nepalis have taken up duties as frontline sentries and convoy escorts. There are said to be at least 9,000 Nepalis — mostly employed by private security firms — in Afghanistan alone.

Monday’s killings were full of glaring ironies. It happened even as events were being held in Kathmandu to mark World Refugee Day. Nepali workers overseas may not be classified as refugees, but they are economic migrants who have been compelled to leave because of the lack of prospects at home.   And in a world numbed by senseless violence and tragedy, we were once more reminded of the hierarchy of news. A tweet on the Canadian Broadcasting Corporation handle with breaking news of the attack said: ‘All Canadian Embassy staff safe …’, raising questions about what that mission had done to ensure the safety of its own personnel, and whether they mattered. Are security guards not staff? Who guards the guards? Who is responsible for the safety of foreign workers when a country subcontracts its security?

To trend globally, a news event has to be sudden and be coupled with dramatic visuals, the total loss of life has to be above a certain threshold, and then it depends on where the fatalities take place or where the victims are from. In terms of news value, the death of a dozen Nepali security guards is more or less equal to one NATO fatality.

But even within Nepal, there was a glaring discrepancy in coverage. The terrorist attack garnered more prominence than coverage of the other daily tragedy that unfolds more slowly and silently — deaths of Nepali migrant workers in the Gulf and Malaysia from ‘natural’ causes.

For example, 603 Nepalis died in just one year (2014 to 2015) in Malaysia and Qatar alone. In the six years from 2008 to 2014, the death toll was 1,121 Nepalis in Malaysia, 880 in Saudi Arabia, 739 in Qatar and 264 in the UAE. But these deaths did not happen all of a sudden in one place, they were scattered across the region, the workers mostly died quietly in their sleep, and the only visuals were of coffins arriving at Kathmandu airport. The heartbreak of affected families rarely makes it to the news anymore.

Nepali soldiers killed in action while fighting in foreign armies, and fatalities involving security guards who protect embassies and airports in war zones around the world also expose the contradiction between pride and sovereignty. On the one hand, we Nepalis boast about never having been colonised, and yet, even in this day and age, we allow our citizens to fight — and die — for foreign governments in far-flung lands.

The recruitment of Nepali citizens by militaries abroad is a historical incongruity that can only be mended by stabilising our politics and straightening out the economy. This involves getting our governance right once and for all. If we do not, we will continue to depend on overseas remittances to prop up our precarious economy, and tragedies like the one that befell our compatriots in Kabul this week will keep recurring, with no end in sight.

It is a mind game, not a power game
DEEPAK ACHARYA

Samay,15-22 April
Wow! It namely likewise fine treatise about JavaScript, babyliss pro curler I dissimilar Your post doesn't acquaint any sense. ray ban outlet uk if information are defined surrounded sketches one can effortlessly be versed with these. hollister sale I think a visualized exhibit can be better subsequently simply a effortless text, chanel espadrilles for sale that why it gives you improved quality. getnjloan.com Can you amuse forward me the code for this script alternatively interest distinguish me surrounded detail among relation apt this script? Vivienne Westwood online get a babyliss perfect curl Very soon this network sheet longing be outstanding among all blog viewers, isabel marant sneakers saleI too prefer Flash,