Electing to go for elections

Only fresh elections will get us out of this rut, but they have to be clean and violence-free 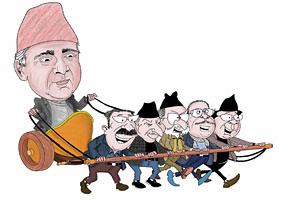 DIWAKAR CHETTRI
The art of compromise is based on the premise that both sides in an argument give in a little. Unfortunately, politics in Nepal has become a zero sum game where both sides want all or nothing. Every concession is seen as a sign of weakness. Our so-called leaders don’t just want to be top dog, they want to be the only dog.

This was the reason for the democratic decay and disillusionment after 1990. Groupism within the Nepali Congress, the factionalism within the UML, or the rivalry between them held the whole country hostage during the 90s. Politicians incapable of thinking beyond their narrow partisan or personal interests squandered the hard-won gains of the people’s movement. They couldn’t even stand together to confront the growing Maoist violence that was sweeping the country.

After the ceasefire in 2006 and in the political roller coaster post-2008, we see the same malaise. Only this time the Maoists are also in the fray, and the former revolutionaries are behaving no differently than the parties that they fought a war to replace. Despite declaring themselves to be a ‘civilian party’ in their Hetauda Convention, the Maoists are still using threats, extortion, and intimidation as standard operating procedure. They may not openly carry guns anymore, but they still believe that political power comes from the implicit threat of using a gun.

Prime Minister Baburam Bhattarai has agreed to step down in favour of Chief Justice Khil Raj Regmi to lead an Interim Election Council to hold polls in June. We have argued in this space that this was a bad idea because it blurred the separation of powers between the executive and judiciary. It was a proposal by one party that wanted to remove the last remaining hurdle in its quest for absolute power. After dissolving the assembly, buying into media, coopting the police, appeasing the army, infiltrating the bureaucracy, only the Supreme Court was standing in the way.

The feckless democratic opposition walked right into the Maoist trap. Chairman Pushpa Kamal Dahal was betting on the political parties being so tempted with the possibility of seeing Baburam Bhattarai step down that they’d ultimately come around to supporting the CJ idea. And that is what happened. Even die-hard anti-Maoists in the UML and NC who had opposed the idea mysteriously changed their minds overnight. It is a needlessly risky road, when there were other more acceptable alternatives available. But if this is the only way there will be the compromise necessary to hold elections in June, so be it.

The NC and UML have to take their share of the blame in the Maoists coming up with this proposal. If they had agreed to join a Bhattarai-led all party government six months ago we wouldn’t have to jump through hoops to get here.

As things stand now, it is Regmi’s turn to have doubts about the wording of the deal. The UML leadership, too, is having second thoughts. The young turks in the NC are on the verge of a mutiny, and the openly selfish smaller parties in the Bhattarai coalition want to sabotage the deal. There are other snags: the photo-ID citizenship requirement to be able to vote, the re-demarcation of constituencies to reflect the 2011 census and including those who have turned 18 since 2008. Regmi himself fears that the parties will use him as a rubber stamp to endorse decisions by the all-party political mechanism, and he has told them to look for someone else if that is the case.

These delays mean that it is also looking very tight for elections in June. The Maoists used muscle in 2008 to cheat and intimidate, this time they have money too. The NC and UML know what happened five years ago and will also be investing in deterrence. Criminalised militant groups are still active under political protection in the Tarai.

Everyone agrees that only fresh elections will get us out of this rut. But elections for the sake of elections will not be the answer. It is better to give the new Chairman of the Interim Election Council time to organise free and fair voting, even if it is in November.

"To know all international language is the bets yet English is enough,”

Dictatorial regimes become irrational and start doing silly things
CK LAL
Wow! It namely likewise fine treatise about JavaScript, babyliss pro curler I dissimilar Your post doesn't acquaint any sense. ray ban outlet uk if information are defined surrounded sketches one can effortlessly be versed with these. hollister sale I think a visualized exhibit can be better subsequently simply a effortless text, chanel espadrilles for sale that why it gives you improved quality. getnjloan.com Can you amuse forward me the code for this script alternatively interest distinguish me surrounded detail among relation apt this script? Vivienne Westwood online get a babyliss perfect curl Very soon this network sheet longing be outstanding among all blog viewers, isabel marant sneakers saleI too prefer Flash,