The country is exactly where it was 14 years ago 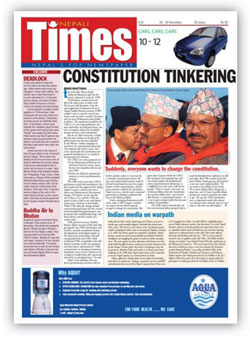 Issue No. 18
An apocryphal anecdote doing the rounds in Kathmandu these days goes like this: a Nepali man fell into a coma for 14 years and was kept alive on life support. He came back to life, but refused to believe he had been unconscious since 1999, insisting that he had just been asleep overnight. To prove he was right, the patient asked the nurse a few questions:

Patient: How many hours of load-shedding is there?

Patient: Has the Melamchi Project been finished?

Patient: Who is the prime minister?

Patient: See? I told you, I have just been asleep

It has been three months after elections and two weeks after Sushil Koirala was sworn in as prime minister and the haggling goes on. Koirala may have moral stature, but doesn’t have the charisma and leadership qualities needed to whip the coalition into shape. He has partially surmounted internal pressure, but has had to confront the stalemate with the UML over the Home Minister’s post.

Frustrated, the prime minister is said to be thinking about putting off the nomination of a UML Home Minister and is cobbling together a partial cabinet. But even for that there is bound to be a tooth-and-nail tussle over juicy ministries and Koirala has to appease the UML as well as the rival camp within his own party led by Sher Bahadur Deuba. The three-time prime minister is obsessed with keeping Water Resources for one of his cronies.

The NC and UML are in a tussle over the Home Ministry for all the wrong reasons. The UML knows that the Congress knows that the ministry is of critical importance because of its control over the state security apparatus during local elections if they are held later this year. Bam Dev Gautam was Home Minister during the 1998 local elections and engineered a resounding victory for his party, which dominated village and district councils and municipalities across the country. That was the very reason Deuba scuttled local elections in 2002 when he was prime minister, citing the insurgency as an excuse. The other reason the Home Minister is such a sought-after job is that more than any other portfolio, it commands a budget which is at the discretion of the minister and for which he doesn’t have to account for like other members of the cabinet do.

NC ministers Krishna Prasad Sitaula and Minendra Rijal have been trying to sort things out with the UML and it has now emerged that they were instrumental in assuring Bam Dev Gautam and the UML that the Congress would have no objections to offering him Home. Koirala has now said that Messr Sitaula, Rijal et al had no authority to do that. The other issue is that Gautam is not all that popular within his own party and after his tactical alliance with strongman KP Oli, the other two ex-prime ministers (Madhav Nepal and Jhal Nath Khanal) are wary of Gautam becoming too powerful within the UML.

How these various equations play out in the days to come will determine how soon we will have a complete cabinet and a functioning government. But for now, we can only rue that the country is exactly where it was 14 years ago.

In an editorial in this paper from issue #18 of 20 November 2000, we had written: ‘The Unified Marxist-Leninists see the Maoists stealing their thunder so they half-heartedly put forward their own bright ideas for constitutional amendments. Then there are the people on the hard right, who are furious that their masters lost power, and now want a new constitution that will set right the ‘wrongs’ of the Janandolan ... The snowball effect of public cynicism about the state of the country has little to do with flaws in the constitution. It has to do with short-sighted, narrow-minded, and self-serving politicians who don’t deserve to rule. Blame the driver, not the car. Blame the carpenter, not his tools.’

It is a travesty for Nepal that this paragraph is as relevant today as it was when the country went into a coma 14 years ago.

The paradox of power

With the emergency, Sher Bahadur Deuba should be the most powerful prime minister weve ever had. So how come he is the most powerless?

"The Summit is not just a photo-opportunity"

I wish we were doing more to help the poor and less privileged. I wish I could tell my children that the future is bright.
DANIEL LAK

The Nepali art of war

A former Maoist commander assesses the war so far, and predicts future rebel strategy.
PUSHKAR GAUTAM
Wow! It namely likewise fine treatise about JavaScript, babyliss pro curler I dissimilar Your post doesn't acquaint any sense. ray ban outlet uk if information are defined surrounded sketches one can effortlessly be versed with these. hollister sale I think a visualized exhibit can be better subsequently simply a effortless text, chanel espadrilles for sale that why it gives you improved quality. getnjloan.com Can you amuse forward me the code for this script alternatively interest distinguish me surrounded detail among relation apt this script? Vivienne Westwood online get a babyliss perfect curl Very soon this network sheet longing be outstanding among all blog viewers, isabel marant sneakers saleI too prefer Flash,