Nepal’s politics is sliding towards the edge of the cliff, and there isn’t much time left to meet the deadline for an elected Federal Parliament. 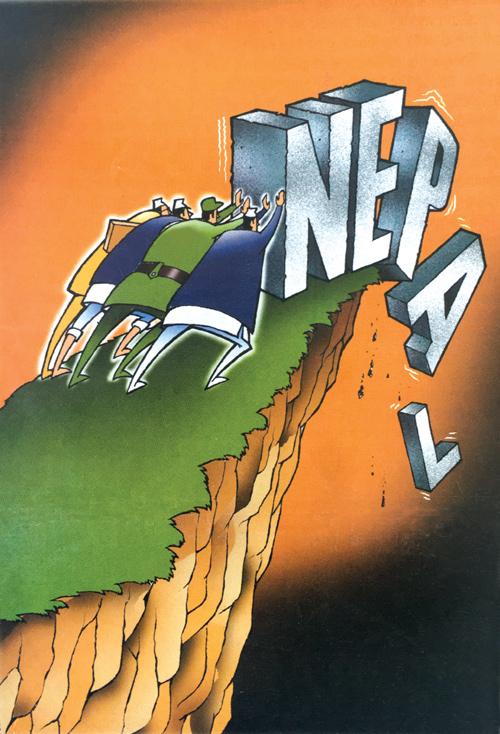 It is rare for national leaders to already be lame ducks when they assume office, but Pushpa Kamal Dahal is one of them. He started his tenure with a built-in nine-month expiry date. That backroom agreement paved the way for regime change and the current coalition between the Maoist-Centre and the Nepali Congress.

Knowing that his administration would automatically self-destruct in nine months hasn’t given Dahal much confidence. His roar is now a meow, and this is the weakest prime minister we have had for a while. Aside from ceremonial ribbon cutting and issuing 26-point directives to the bureaucracy (which it blithely ignores) Dahal has been unable to get his coalition partner as well as the opposition UML to back his formula for constitution amendments to appease the Madhesi parties. The ruling coalition doesn’t have a concrete plan on amendments regarding electoral districts, citizenship, language and federal provinces. The NC is leaving Dahal alone to struggle to find a compromise, probably preferring to wait until its own President Sher Bahadur Deuba takes over as prime minister in April.

Dahal has been coaxing the NC and the UML to agree on a least common denominator on the amendments. Being the second-biggest party in Parliament, the UML holds the swing vote on any proposal to change the constitution, and is driving a hard bargain. Party Chair K P Oli is still bristling at Dahal for pulling the carpet from under him to stage a coup in July, and has rejected outright the proposal to carve out new federal provinces. Oli senses that the Madhesi parties are themselves not in agreement on the finer points of the amendments, and is using that to his advantage. Ironically this lets Dahal off the hook vis-a-vis the Madhesis because he can say "I tried to convice Oli".

Mixing short-term vote bank politics with long-term constitutional provisions is always dangerous, but even more treacherous is to try to tamper with boundaries. The constitution amendments involve, among others, the dispute over five Tarai districts in the far-west and east, as well as splitting up Province 5 to carve out a Tarai-only province. Dahal has tried his best to meet the two-week ultimatum given by the Madhesi parties, and they have now threatened an agitation. The UML is also warning it will go on war-path. Protests have already started in Rolpa and Banke. Tensions simmer among the non-Madhesi populations of Jhapa, Morang and Sunsari. In the eastern Tarai there is festering resentment against Kathmandu’s attempt to roll back on autonomy. This does not bode well for Nepal’s stability.

There are other looming deadlines. With only 14 months left for the new federal constitution to go into force, time is of the essence. But you wouldn’t know that given the lethargy of our elected representatives who seem more intent on raising their own perks.

The current Legislature-Parliament’s mandate expires on 21 January 2018, and by that time we need to have already conducted local, provincial and federal parliament elections. Local and federal provincial elections have to be held at latest, by May 2017, but we haven’t even agreed on how many provinces and their boundaries.

Nepal is sliding inexorably towards the cliff edge. If the current Parliament expires, the country will be at a political dead end with no precedence on how to resolve the deep uncertainty about our future. The coming weeks will determine whether the political leadership will look beyond personal and partisan interests to the long-term stability and development of the country.

This week marked the 10th anniversary of the signing of the Comprehensive Peace Accord. Politicians were busy congratulating themselves at various functions held in the capital to mark the anniversary, but the last step of that process which involves promulgating and implementing a new inclusive constitution looks very iffy. That puts the entire peace process in jeopardy. Not having an elected Federal Parliament by January 2018 will also endanger the very existence of the political parties, and threaten Nepal’s democracy.

Although it may never be screened in Nepal, its worth getting a DVD of Brokeback Mountain

The Maoists have headed for the towns, leaving their base areas deserted
SUBEL BHANDARI in THAWANG

Top tips from some of the worlds best
SUJAY LAMA

A dear uncle recently returned from Japan and told me his bittersweet tale
SHRADHA GHALE
Wow! It namely likewise fine treatise about JavaScript, babyliss pro curler I dissimilar Your post doesn't acquaint any sense. ray ban outlet uk if information are defined surrounded sketches one can effortlessly be versed with these. hollister sale I think a visualized exhibit can be better subsequently simply a effortless text, chanel espadrilles for sale that why it gives you improved quality. getnjloan.com Can you amuse forward me the code for this script alternatively interest distinguish me surrounded detail among relation apt this script? Vivienne Westwood online get a babyliss perfect curl Very soon this network sheet longing be outstanding among all blog viewers, isabel marant sneakers saleI too prefer Flash,