The problem is not the democratic system, but the people who abuse it. 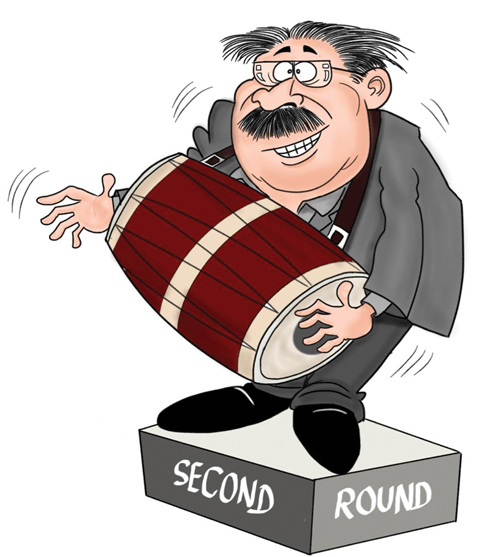 In dictatorships, it is the standard operating procedure to detain civil society activists and dissidents. But it is when a nominally democratic state that is supposed to be governed by its professed core values starts incarcerating journalists and trying to muzzle the media, that the situation turns ominous.

Recent events prove that you do not need a dictator to roll back democracy and try to exert control over the free press. Parallel power centres can easily commandeer the system, and we are threatened by the rise of elected demagogues.

Nepal’s political transition is in a prolonged interregnum between two constitutions, and it is in this adjustment period that there is the danger of a return to authoritarianism.

In its recent history, Nepal has been through various forms of totalitarian rule: a century of the feudal Rana regime, 30 years of an absolute Panchayat monarchy, and the authoritarian streak of King Gyanendra who staged a military coup in 2005. In between, we have seen two pro-democracy uprisings, only to witness the hard-won freedoms frittered away by power-greedy politicians.

When the initial exhilaration of democracy has evaporated, cynicism replaces hope, and the people lose their trust and faith in the public officials they elected to power. That is when there is a creeping nostalgia for strongman rule. In Nepal, we see this mindset manifested in support for an executive presidency in the new constitution, and the public’s admiration for centralised control as in China, or for leaders like Lee Kuan Yew to steer the country towards prosperity.

But we have tried dictatorships before, and ended up wrestling against them because they were unrepresentative and turned out not to be an effective form of governance. They centralised corruption, reduced participation and oppressed the people, giving them no say in how they wanted to be ruled. We hoped for benevolent dictators, but ended up with malevolent ones.

Whenever democracy is in disarray, there is a hankering for strongman rule. And as we saw in the Indian Emergency, a strongman need not be a man at all. Indira Gandhi’s experiment with autocracy may not have lasted long because the roots of democracy and press freedom in India went too deep, but there are still intellectual adherents to Indira’s ‘disciplinism’.  And across the world today, we see a similar ideological tilt towards authoritarianism even in apparently open societies.

The rise of the racist right in Europe, the terrifying prospect of Donald Trump being elected to the White House, the self-confessed head of a death squad being chosen as president of the Philippines, the UK Independent Party’s vision of an independent UK during the Brexit vote, and in our own neighbourhood an increasingly intolerant ruling party that resorts to religious revivalism as the mantra of power.

Western democracies have a design defect: they permit the untrammelled freedom to express even the most extreme and despicable views. Populist politicians use this to stoke xenophobic fears about migration, crime, and terrorism, and the mass media can be manipulated to whip up the electorate. Democracy thus ends up bringing to power demagogues who capitalise on nationalism, bigotry and identity politics, especially during times of turmoil.

Jochen Bittner of the German newspaper Die Zeit calls this global anti-democratic wave ‘Orderism’ — it is based on fear and offers stability over freedom, and could also be called ‘Putinism’. Bittner compares Orderism to the promises of utopia under Communism, and says ‘it is merely a fig leaf for tyranny’. The enemy is liberal democracy, and in this Putin, Trump, Duterte, and others have a mutual admiration society.   In Nepal, the yearning for strongman rule stems from 25 years of political instability, reckless and unaccountable leadership, and democratic decay. There is a romantic notion that the Malaysian model of limited democracy would usher in economic growth, but it is all too easy to forget that Malaysian Prime Minister Najib Abdul Razak is today facing a US Department of Justice investigation into one of history’s biggest corruption scandals.

Absolute power corrupts absolutely, and we see a glaring example of that in Nepal today. Our own anti-corruption watchdog is now more powerful and dominant than the elected government of the day. It is fashionable to say in hoity-toity circles in Kathmandu that Nepalis are too immature, ignorant and poor to deserve democracy. That perception is natural, because the status quo benefits the privileged few, and genuine democracy would shake things up. The problem is not the system, it is the people who abuse it for personal enrichment and power. Corrupt party apparatchiks, political brokers, and patronage are the real reasons for the state we are (still) in.

The answer is to keep strengthening the pillars of democracy, and fortifying the institutions that pose a critical check and balance to a failed Executive and illegitimate centres of power: civil society, mass media, the Judiciary and the Legislature.

Stability at what cost, editorial

Editorial in Rajdhani, 26 May

The good, bad and ugly

A look at billboards that are dwarfing Kathmandu's skyline.
NAVIN SINGH KHADKA

Nepal, 30 May
Wow! It namely likewise fine treatise about JavaScript, babyliss pro curler I dissimilar Your post doesn't acquaint any sense. ray ban outlet uk if information are defined surrounded sketches one can effortlessly be versed with these. hollister sale I think a visualized exhibit can be better subsequently simply a effortless text, chanel espadrilles for sale that why it gives you improved quality. getnjloan.com Can you amuse forward me the code for this script alternatively interest distinguish me surrounded detail among relation apt this script? Vivienne Westwood online get a babyliss perfect curl Very soon this network sheet longing be outstanding among all blog viewers, isabel marant sneakers saleI too prefer Flash,