Pack your gear and go

Trekking in Nepal is booming, but faces competition from a spreading road network and underpricing
Elvin L Shrestha 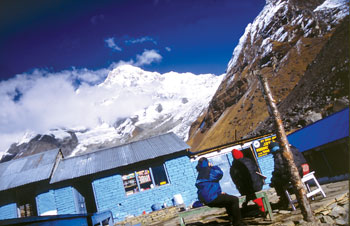 Despite a lingering monsoon that has overstayed its welcome, the autumn tourist season is off to a flying start. September-November is a peak trekking season, seeing up to 40 per cent of annual arrivals. Autumn offers pleasant weather, clear skies and spectacular mountain views, ideal for trekking. An added attraction is that autumn also coincides with the festival season.

“We are expecting a big boom in trekking this season,” says Ramesh Dhamala of the Trekking Agencies Association of Nepal (TAAN). The bookings look robust, and there has been an unprecedented spurt in the number of Chinese trekkers. The increase in the number of flights to Nepal this year has also meant that last year’s seat bottleneck is not as acute.

Despite growth, however, the trekking industry still has not benefited from the full potential for job creation and income generation at the local level. Hikers are still limited mainly to Annapurna, Langtang and Everest regions with other areas still only getting a trickle of trekkers.

The trails in these regions are well maintained by locals because they are aware that it is related to their business, says Raj Tamang, of Responsible Adventures, an ecological trekking company. “But locals and the authorities have been lax about maintenance of trekking routes in other, less popular regions,” Tamang says.

The potential for new trek routes in Nepal is unlimited, but many areas that would benefit most from trekking lack proper trails, quality lodges and other facilities. Most trekkers opt for the mainstream routes because they are well-established and there is a good support in case weather turns bad. Most other routes need expedition style camping and support, and turn out to be more expensive.

Nevertheless, in 2015 TAAN is trying to open up new trails along the Manaslu Circuit, Ganesh Himal, Rara, and alternative routes around the Annapurnas. This trend is gathering momentum because of the spread of roads and the demand from trekkers for trails that are away from pollution and honking. Construction of new roads have also triggered landslides, affecting many main trekking trails for example in the Chame area of Manang, the Kali Gandaki, Langtang and Manaslu.

“The biggest challenge now is to diversify established routes which overlap with motorable roads,” says Dhamala. The other perennial problem with trekking in Nepal has been price undercutting by agencies providing shoddy services which not only gives hiking in Nepal a bad image, but also reduces the income for porters and tea houses along the way. Trekking guides with limited experience are poaching customers from each other and compromise on services to offer the lowest price.

Tamang maintains that trekking in Nepal is underpriced, and unhealthy competition ultimately hurts the tourism economy. “The industry is too focused on wooing tourists with low prices and too indifferent towards improving their service,” says Tamang, “We need to attract quality eco-tourism rather than mass tourism.”

The palace continues to be both referee and centre forward
CK LAL
Wow! It namely likewise fine treatise about JavaScript, babyliss pro curler I dissimilar Your post doesn't acquaint any sense. ray ban outlet uk if information are defined surrounded sketches one can effortlessly be versed with these. hollister sale I think a visualized exhibit can be better subsequently simply a effortless text, chanel espadrilles for sale that why it gives you improved quality. getnjloan.com Can you amuse forward me the code for this script alternatively interest distinguish me surrounded detail among relation apt this script? Vivienne Westwood online get a babyliss perfect curl Very soon this network sheet longing be outstanding among all blog viewers, isabel marant sneakers saleI too prefer Flash,