Squeezed in the Himalaya 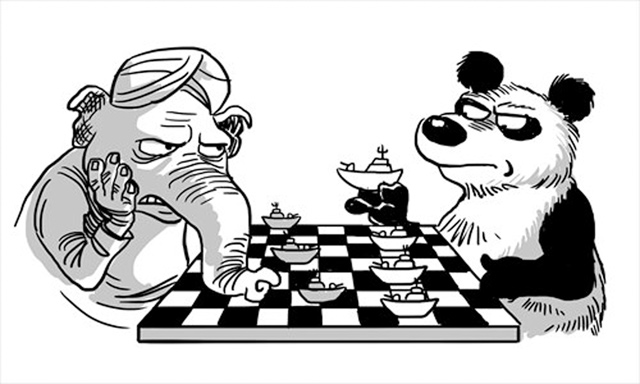 The confrontation between India and China over the strategic Doklam region of Bhutan has the potential to flare up into the most serious tension between the two Asian giants since their 1962 Himalayan war.

The sabre-rattling by officials and media on both sides show that a resolution to this stand-off is not imminent, causing anxiety to the two countries that are sandwiched between them: Bhutan and Nepal.

The initial trouble began in early June when China demolished two old bunkers in Bhutan built by the Indian Army garrisoned there. The Chinese People’s Liberation Army (PLA) then brought bulldozers to start constructing a road on the Doklam Plateau towards the tri-junction of the borders of Bhutan, China and India.

This led to both countries deploying troops to the area, and a war of words erupted in Delhi and Beijing. The Global Times in Beijing carried a story stating that India will suffer worse losses than in 1962 if it continues to push at the Bhutan-China border. On the other side, the Indian newsmagazine Outlook chose to run an article entitled ‘Chink in the Checker’s Board’.

Each side has roughly 300-400 soldiers at the stand-off site. India is said to have moved another 2,500 troops to the area, and China has also deployed an unverified number of soldiers at the strategic Chumbi Valley. India and China have said they do not intend to back down in this fight, leaving the burden of diplomacy on Bhutan whose foreign policy and defence are nominally handled by New Delhi.

“Both China and India are trying to politicise Bhutan’s situation to their advantage, but history tells us that Bhutan has been better at handling China than India, in more ways than one,” Bhutanese international relations specialist Passang Dorji told Nepali Times. Beijing appears to be trying to drive a wedge between Bhutan and India, using the under-the-surface exasperation many Bhutanese feel about India’s dominance. Meanwhile, in India there is a feeling Bhutan is not protesting enough about Chinese activities on its border.

“Bhutan has chosen to isolate itself, which has proven to be a mistake at times such as this. It has done well in economic development, environmental conservation and selling power to India but today’s world order is very unkind to small countries,” said Nishchal Pandey of the Centre for South Asian Studies, in Kathmandu.

Nepal’s situation is less precarious than Bhutan. It remained a neutral buffer state in the 1962 conflict, has a policy of equidistance between its giant neighbours. However, there are about 50,000 Nepalis in the Indian Army and any open conflict in the Himalaya would be detrimental to its security (See Editorial page 2).

Bhaskar Koirala of the Nepal Institute of International and Strategic Studies said the timing of the current tension is linked to remarks by Indian Foreign Secretary S Jaishankhar in Washington DC during Prime Minister Modi’s visit there last month in which he used the term ‘strategic convergence’ between the US and India. The joint US-India-Japan naval exercises in the Indian Ocean and the Dalai Lama’s visit to Arunachal Pradesh seem to have added to China’s suspicions.

But if the situation in Bhutan is to escalate, a third party will inevitably interfere and if contemporary history is to be trusted, then that party will most likely be the United States.

Koirala explained: “The US can’t fully support India because the US and China have a lot of shared interests. The US would also urge Nepal to stay neutral.”

This exhibition highlights the aberration so common in Nepali abstract art. In the name of abstraction, the unimaginable is passed off as art.

In this story lies the moral: those who taste of the delights of the Kathmandu Valley are forever blissfully enslaved.

The 7th CAN Info-Tech trade show this week focuses on value-added services.
GAURAB RAJ UPADHAYA
Wow! It namely likewise fine treatise about JavaScript, babyliss pro curler I dissimilar Your post doesn't acquaint any sense. ray ban outlet uk if information are defined surrounded sketches one can effortlessly be versed with these. hollister sale I think a visualized exhibit can be better subsequently simply a effortless text, chanel espadrilles for sale that why it gives you improved quality. getnjloan.com Can you amuse forward me the code for this script alternatively interest distinguish me surrounded detail among relation apt this script? Vivienne Westwood online get a babyliss perfect curl Very soon this network sheet longing be outstanding among all blog viewers, isabel marant sneakers saleI too prefer Flash,