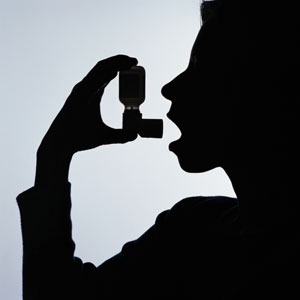 Thirty-year-old Suman Rai had an on and off history of cough and wheezing. Her cough got worse during the night and in winter. She occasionally suffered from stuffy nose and watery nasal discharge, but otherwise was healthy with no other problem. After a proper physical examination and some simple tests, the doctor concluded that Rai had bronchial asthma. With winter around the corner, it is worthwhile to go over some new developments regarding this common ailment.

Bronchial asthma is basically a narrowing of the airways of the lungs. Bronchoconstriction as it is called, is caused by the tightening of the muscles around the airways. But inflammation of the airways also plays an integral role in causing asthma attacks. The lungs of asthma patients make a whistling sound because the transmission of air through the narrowed passage is bumpy with plenty of ricocheting against the walls of the lumen.

If this narrowing continues unabated without proper treatment then the patient runs the risk of acquiring chronic obstructive pulmonary disease (COPD). COPD is definitely worse than asthma because it heralds irreversible obstruction and leads to many other complications whereas asthma is a reversible obstruction.

Interestingly, a relatively new finding about disease progression reveals that the overall severity of asthma does not vary significantly within a given patient. That is, individuals who have mild asthma continue to have mild asthma and those with more acute inflammation continue to have them. No one really knows why some people are more susceptible to asthma than others, but many studies suggest a genetic predisposition via family history and genetic screenings. However, as with many other diseases, no single genetic profile has shown a positive predictive value.

The prevalence of asthma has leveled off in the last 30 years with a rate of about 15 per cent in children and 10 per cent in adults. Asthma deaths too have decreased in recent years. In the 1960s, deaths due to asthma in the West were on the rise because of the overuse of certain kinds of medicines called short-acting beta agonists. However, since the introduction of inhaled corticosteroids which counter inflammation, the main culprit in asthma, death rates have declined.

For those who are predisposed to asthma, there are many ‘triggers’ that can set off an attack. The common ones are: respiratory infections, cold air, exercise, emotional excitement etc. But people who are on maintenance therapy with steroid inhalers can be well protected from some of these bothersome triggers. Since inhaled steroids have significantly less side effects, they are far safer than ingesting oral steroids. What is far more important, however, is for patients to have the knowledge to inhale the steroids puffs properly and not to swallow them down the digestive tract, where the medicine serves no purpose. Asthma pathology is in the airways of the lungs and the inhaled steroids need to be deposited in the lungs. Proper hand mouth coordination is also vital for drug delivery. Unfortunately, many Nepali patients are prescribed inhalers without being properly taught to use this machine for optimal benefit.

The rebirth of Kaiser Shumsheres Garden of Dreams.
SRADDHA BASNYAT

Why do we need tanks?

Nepal does not need, nor can it afford, to buy tanks and helicopter gunships.
ANALYSIS by Kanak Mani Dixit

Required reading for every angst-ridden school dropout in Nepal duped into believing that dictatorship is a necessary condition for utopia.
CK LAL
Wow! It namely likewise fine treatise about JavaScript, babyliss pro curler I dissimilar Your post doesn't acquaint any sense. ray ban outlet uk if information are defined surrounded sketches one can effortlessly be versed with these. hollister sale I think a visualized exhibit can be better subsequently simply a effortless text, chanel espadrilles for sale that why it gives you improved quality. getnjloan.com Can you amuse forward me the code for this script alternatively interest distinguish me surrounded detail among relation apt this script? Vivienne Westwood online get a babyliss perfect curl Very soon this network sheet longing be outstanding among all blog viewers, isabel marant sneakers saleI too prefer Flash,