Nepal has become a booming market for elevators and escalators 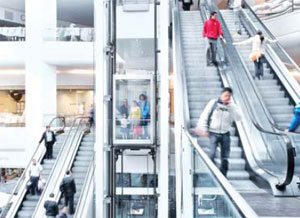 With Kathmandu’s real-estate prices soaring, developers are investing in taller apartments, office blocks and shopping complexes. This means Nepal has suddenly become a booming market for elevators and escalators.

Till a decade ago, there were hardly any high rises in Kathmandu and there were almost no representatives here for companies manufacturing and installing lifts.

The Duisberg-based multinational ThyssenKrupp specialising in elevators is one of the first to realise the huge potential for growth in Nepal and has appointed Infratech as its authorised dealer to sell passenger and freight elevators, escalators and moving walkways in the Nepali market.

“Nepal is a growing market with a lot of potential and we hope to tap into that,” says Bharat Vishnani, managing director of ThyssenKrupp Elevator (India). The company has already sold 20 units of elevators from ThyssenKrupp to housing projects in the Valley since it established its presence here, and is moving aggressively to expand its market share.

During a recent visit Vishnani said Nepal was poised to show a spurt in economic growth and a surge in investment in infrastructure. This is expected to translate into a growth in demand for elevator products, escalators and moving walkways.

ThyssenKrupp says its German-engineered lifts are rugged and designed for countries like Nepal with power-cuts. Its lifts consume 40 per cent less electricity and have an automatic rescue device that ensures orderly evacuation of passengers in case of unexpected power outage.

Thyssenkrupp elevators and escalators are equipped with governors -- a safety mechanism for detecting over-speed and other malfunctions.

Infratech says maintenance and equipment safety are of paramount concern, and it will be carrying this out periodically with customers through trained technicians.

Gorkhapatra, 6 July
Wow! It namely likewise fine treatise about JavaScript, babyliss pro curler I dissimilar Your post doesn't acquaint any sense. ray ban outlet uk if information are defined surrounded sketches one can effortlessly be versed with these. hollister sale I think a visualized exhibit can be better subsequently simply a effortless text, chanel espadrilles for sale that why it gives you improved quality. getnjloan.com Can you amuse forward me the code for this script alternatively interest distinguish me surrounded detail among relation apt this script? Vivienne Westwood online get a babyliss perfect curl Very soon this network sheet longing be outstanding among all blog viewers, isabel marant sneakers saleI too prefer Flash,