Himalayan Bank says it is seizing this moment to introduce a faster payment system, while at the same time expanding its physical branches to comply with the central bank’s requirements 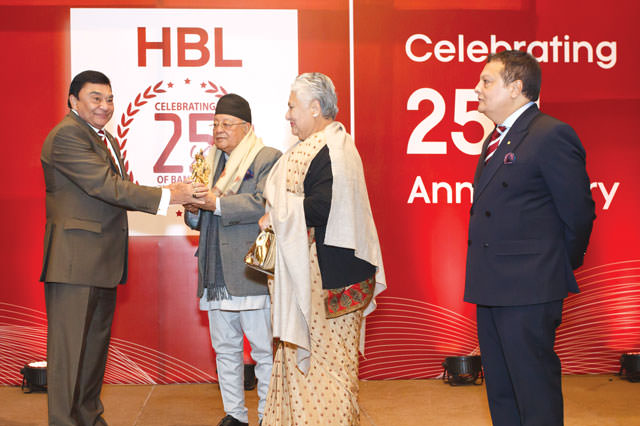 When Himalaya Shumsher Rana returned to Nepal after a stint at the United Nations to establish a joint venture bank in 1983, he probably didn’t imagine that 25 years later Himalayan Bank would grow to what it is today: Nepal’s premier, pioneering financial institution, with paid-up capital exceeding Rs8 billion and 49 branches across the country.

At the bank’s 25th anniversary function this week at the Hyatt Regency, Rana was honoured for a lifetime of achievement (above). Retired, but also serving as the bank’s chief adviser, he recalled how unique it was in the 1980s to enter into a South Asian financial partnership, this one with Habib Bank of Pakistan.

Chief Executive Officer Ashoke SJB Rana, scion of the founder (pictured at right, above) praises his father’s pioneering spirit and foresight. It is on the foundations laid by his father that Himalayan Bank now registers yearly growth of 12-15%.

However, Nepali banks in general are facing a liquidity crunch after the 2017 elections. The growth in real estate transactions shows that although there is money in the market, banks are not being able to lure it as deposits.

“The government consistently spent less than 30% of its total capital within a six-year period. This fiscal year it showed only 14% expenditure out of the total capital, which is another reason why banks are facing deficits,” Ashoke Rana explains.

Ever since Nepal Rastra Bank signed the global Anti Money Laundering protocol, banks have to comply with new international regulations. This means extra budgeting is needed to hire more people to screen all accounts and to invest in anti-money laundering software.

“Compliance is the buzz word in the banking sector right now,” says Ashoke Rana, “and it adds another challenge for Nepal’s financial institutions.”

The Rastra Bank also introduced the interbank payment system, under which banks are to allow customers to pay their utility bills through other banks if they wish.

Himalayan Bank says it is seizing this moment to introduce a faster payment system, while at the same time expanding its physical branches in the seven new provinces to comply with the central bank’s requirements.
Himalayan Bank is also increasingly involved in lending for infrastructure projects, especially hydropower and the energy sector.

Trekking in Mustang, you pay Rs25 for a "sun bath". Fancy name for something many Valley residents are familiar with: solar-heated water.
HEMLATA RAI

It is better to give

Philanthropy is finally gaining ground among Nepalis who are moved by a sense of equity, rather than the possibility of religious or spiritual payback.
RAMYATA LIMBU

Scenes from the Great Global Clich

The heady combination of vile food, unlikely travelling companions and worsening jetlag makes for many insights, some of them clich?s that come back with surprising freshness.

ADB has sanctioned $120 million for Melamchi, but questions about distribution remain.
BINOD BHATTARAI
Wow! It namely likewise fine treatise about JavaScript, babyliss pro curler I dissimilar Your post doesn't acquaint any sense. ray ban outlet uk if information are defined surrounded sketches one can effortlessly be versed with these. hollister sale I think a visualized exhibit can be better subsequently simply a effortless text, chanel espadrilles for sale that why it gives you improved quality. getnjloan.com Can you amuse forward me the code for this script alternatively interest distinguish me surrounded detail among relation apt this script? Vivienne Westwood online get a babyliss perfect curl Very soon this network sheet longing be outstanding among all blog viewers, isabel marant sneakers saleI too prefer Flash,