Two months later at the epicentre

A mid-sized organisation based in prague proves you don't have to be a massive organisation to make a difference by helping Gorkha, the epicenter 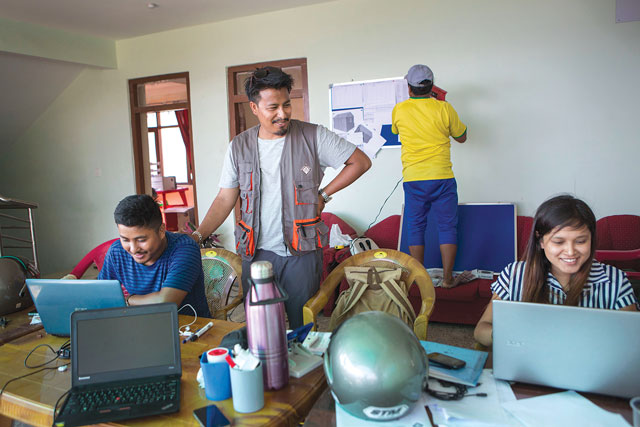 YOUTHFUL ENERGY: Sudip Joshi was working in Afghanistan when the earthquake struck his homeland. He packed his bags and came to Gorkha to help out.

GORKHA -- In the hours after a devastating earthquake hit his home country, a Nepali NGO worker in Kabul met his supervisor to announce that he was going home to help.

Sudip Joshi, 26, worked for the Czech non-profit, People in Need, in Afghanistan. He knew he’d have to start from scratch, but was determined to make a difference. Within 48 hours, Joshi had hit the ground running in Gorkha to organise an emergency relief effort.

He put together a team of 18 young volunteers to first assess needs and deliver food, tarps, blankets and mattresses. Power lines were down, roads and trails destroyed by landslides and aftershocks continued, but they worked non-stop.

“For the first month, we didn’t take a day off. We were showering after four or five days, we slept in sleeping bags out in the open,” Joshi recalled.

People in Need is a mid-sized organisation based in Prague, but here in Gorkha it was big, working quietly and resolutely in 15 VDCs completing its initial response in less than 10 days, filling the gaps left by bigger INGOs. In order to avoid overlap and boost efficiency, local government agencies implemented a cluster approach: assigning relief groups to focus on specific sectors, such as shelter, food or water and sanitation. 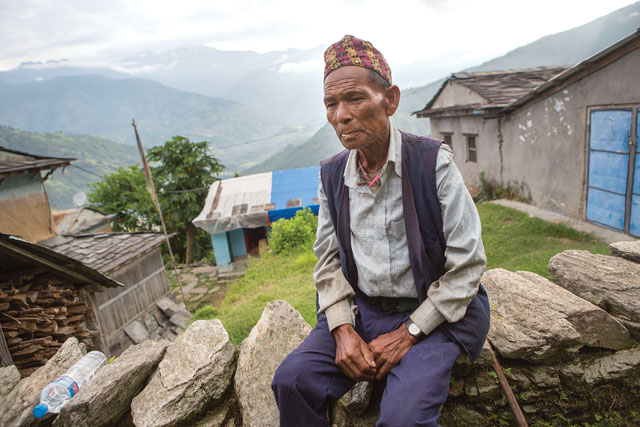 PICS: JANA AŠENBRENNEROVÁ
Khaman Pariyar, 74, lives in the Dalit neighbourhood of Kerabari. He and his wife lost everything, but the Czech group, People in Need, helped him rebuild.

With an on-the-ground team of just over 30, including volunteers, People In Need focused on food and shelter in Gorkha and Sindhupalchok. Mukesh Singh Thapa, 27, had just completed his masters in nutrition in Israel and had no prior experience in emergency relief, but volunteered to get the supplies out.

“It was an amazing experience,” Thapa said. “It was a race against time to get the material out before the rains. But we learnt as we went along.”

Bishal Shrestha, 25, is a field engineer and helped villagers rebuild their houses with corrugated sheets. “The first few weeks were crazy, in places we had to cross landslides by holding onto the roots of trees.”

People In Need focused on remote villages and marginalised communities bypassed by others. It mapped out villages that were cut off, and even within those found Dalit neighbourhoods usually excluded from services.

“We showed that with the right planning and dedication, you don’t have to be a massive organisation to make a difference,” said Joshi. “The best part of all this is that we are all in our 20s and we are taking responsibility.”

The three-month grace period to newly registered NGOs is about to end, and bureaucratic hassles are delaying relief work. The confusion at policy level is also discouraging potential donors.

Constantly changing guidelines about relief supplies and operational standards haven't helped. “We want to follow the country standards, but we would like a consistent set of standards,” said a senior official of an INGO on condition of anonymity.

Says People In Need’s Maciej Perczynski: “If funds become available, we would like to move from relief to recovery and to help people rebuild their livelihoods."

From Iceland with love

The forgotten and forsaken