Marooned by the monsoon 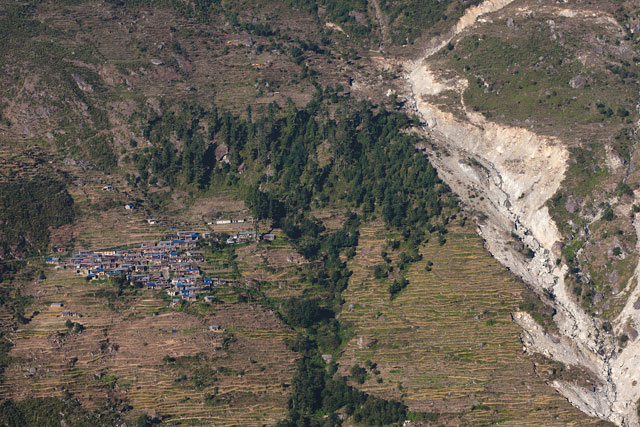 After a 7.8 magnitude earthquake flattened his house, Muku Tamang, a 35-year-old farmer from the remote Sertung village of northern Dhading district, built a temporary shelter with a tarpaulin sheet dropped by a helicopter.

Tamang considered himself lucky because all of his five family members survived the earthquake that killed 13 people in Sertung alone. “I thought the earthquake just destroyed my house, and I was certain I would rebuild it sooner than later,” he says.

But the earthquake turned out to be just the beginning of his hardships.

Monsoon rains have started triggering landslides on the unstable slopes, burying cropped terraces and houses that had withstood the jolt. Tamang lost most of his farm in a landslide on 15 June.

“There is no way relief supplies would reach my village, so we decided to walk down,” he says. “I was hoping I could feed my family with maize and potatoes that grew on my field but the landslide left me with nothing.”

Tamang’s wife and three children joined an exodus of people displaced by the earthquake and ensuing landslides. They walked down for two days, finally boarded a bus and arrived at the district capital of Dhading Besi.

According to Dhading CDO Basudev Ghimire, villages in Sertung, Tiplung, Jhaplang, Ri and Lapa are threatened by landslides and need urgent evacuation. More than 550 people from 60 families from northern Dhading have arrived and are living in a tented settlement outside town to wait out the rains.

“Saving people from landslides in this monsoon is a huge challenge,” he says.

Tek Tamang, 29, also left Sertung because it was impossible to live there: “The earthquake and landslides destroyed not only our houses but also schools, health posts, water taps and water mills. The government must show us a safe place to relocate. Life is not easy here, the tents leak and the wind blows them off.”

Landslides are now emerging as the next big disaster in the 15 mountain districts worst affected by the earthquakes of 25 April and 12 May. International Centre for Integrated Mountain Development (ICIMOD) says the earthquakes have caused more than 3,000 landslides in central Nepal.

Apart from Dhading, districts like Sindhupalchok, Rasuwa, Gorkha, Dolakha and Kavre are at a high risk of landslides this monsoon. Thousands of families have abandoned their villages and have moved to wherever they can live safely.

In Rasuwa, an earthquake-triggered avalanche on 25 April buried the whole village of Langtang, killing at least 200 people. Entire villages have been abandoned. More than 750 families from Haku are now living in temporary shelters in Dhunche and Betrawati. Rasuwa CDO Uddhab Prasad Bhattarai says six villages need to be relocated, but families there have no alternatives.

Sindhupalchok, where the earthquakes killed nearly 4,000 people, is probably the most vulnerable to landslides and many have moved to Kathmandu. As many as 54 of the total 68 VDCs are at risk. Says Sindhupalchok CDO Krishna Prasad Gyawali: “The earthquakes have torn the mountains apart, we’re afraid the landslides will kill more people than the earthquake.”

In northern Dolakha, 22 VDCs were vulnerable to landslides even before the earthquakes. CDO Debendra Lamichhane told Nepali Times: “We’re asking people to be alert particularly during and after heavy rains through local FM radios.”

In northern Gorkha, the epicentre of the 25 April earthquake, as many as 12 VDCs are at risk of landslides. Lawmakers representing the district have visited many landslide-prone villages and asked people living there to move to safer places. But unlike other districts, most people in northern Gorkha have not abandoned their villages.

“We’ve identified some safe places where people from the landslide-prone areas can be relocated, but they don’t want to move out of their villages,” says Gorkha assistant CDO Dipendra Poudel. Lack of basic needs like water, toilets, electricity, hospitals, schools and means of livelihood discourages people from moving out of their ancestral land.

All district administration offices have stockpiled relief materials and Nepal Army, Armed Police Force and Nepal Police have been on high-alert, but organised relocation of vulnerable villages is not happening.

Says Dolakha CDO Lamichhane says, “Geologists from Kathmandu are still preparing their report on which villages need to be relocated.”

Over-stretched and plagued by past mistakes, the national airline struggles to pull out of a nosedive.
PRAGYA SHRESTHA

Maybe now we will find the middle ground between absolute anarchy and absolute monarchy.
BP GIRI

You ain’t seen nothing yet.

BP Koirala is remembered, but wouldnt have approved.
BINOD BHATTARAI

BP Koirala is remembered, but wouldnt have approved.
Wow! It namely likewise fine treatise about JavaScript, babyliss pro curler I dissimilar Your post doesn't acquaint any sense. ray ban outlet uk if information are defined surrounded sketches one can effortlessly be versed with these. hollister sale I think a visualized exhibit can be better subsequently simply a effortless text, chanel espadrilles for sale that why it gives you improved quality. getnjloan.com Can you amuse forward me the code for this script alternatively interest distinguish me surrounded detail among relation apt this script? Vivienne Westwood online get a babyliss perfect curl Very soon this network sheet longing be outstanding among all blog viewers, isabel marant sneakers saleI too prefer Flash,