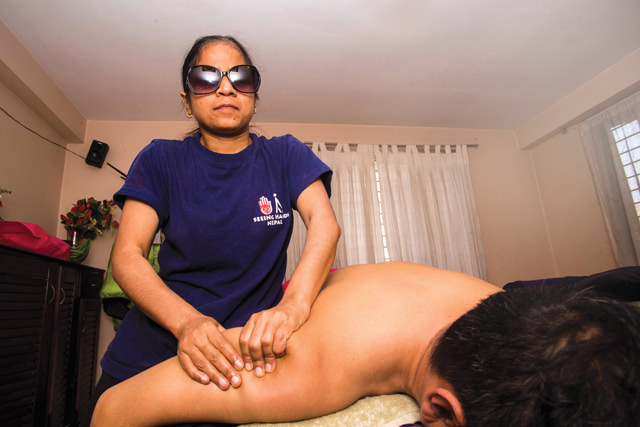 The blind in Nepal face not only a health disability but also an economic one, however massage therapists of Seeing Hands Nepal are turning heads – and sore muscles – with their winning model of social entrepreneurship.

Consistently ranked #1 among ‘Things to do in Kathmandu’ by TripAdvisor and featured in Lonely Planet, Seeing Hands Nepal is now a self-sustaining venture. Income generated from its first two Kathmandu clinics in Patan and Thamel were used recently to open a third clinic at Boudha.

Owner of Seeing Hands, Chiran Poudel, says the secret is that blind massage therapists have a heightened sense of touch and can be more focused on the body’s pressure spots: “The eyes cannot see, but the rest of our four other senses are more active.”

Seeing Hands started out as a project in 2005 with just four blind students, including Poudel. British couple Rob and Susan Ainley tutored the students on professional massaging techniques and practical therapy.

The clinic picks visually impaired students straight out of high school to help them find a secure career. Profits from the clinics are pooled into a fund to help new students. Poudel says: “I am happiest when therapists graduate and work at the clinics, because I am reassured that more blind people are getting the jobs they need.”

During the peak season, trekkers with blistered heels and aching muscles seek out Seeing Hands in Thamel. Satisfied customers Lawrence and Katia from Australia were on their way to Everest Base Camp last week, and stopped by Seeing Hands before setting out. They found the visually impaired therapists easy to converse with, and shared jokes to ease the tension. 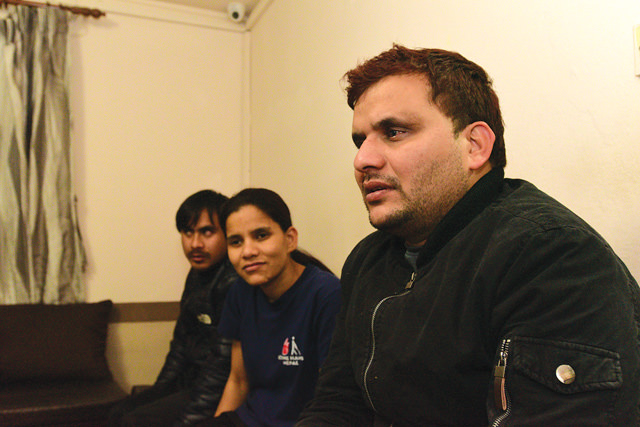 Chiran Poudel, owner of Seeing Hands, resting between sessions with two other massage therapists, at the Thamel clinic .

Lawrence says, “If someone is blind but has an incredible demonstration of ability, it’s a good service even though it’s more expensive.” Therapist Ramji, who treated the Australian couple, even correctly guessed Lawrence’s weight purely by feeling with his hands. “Some clients don’t even notice that I’m visually impaired,” he says.

Thirteen therapists are now employed in Seeing Hands clinics in Kathmandu, many of them from poor rural backgrounds. They previously worked in vocational jobs such as making candles and incense sticks.

Having been born blind to a family with 13 siblings, Poudel blames the lack of education in Nepal for the social stigma blind people suffer because they are seen as a burden to family and society. The 2015 Constitution commits to ending the discrimination, and makes it mandatory to provide facilities and education for people with disabilities, but many new laws and budgetary reforms haven’t been implemented.

Of the estimated 100,000 visually impaired women in Nepal only 134 are employed, according to the Nepal Blind Association. Seeing Hands therapist Lalu is from Tanahu and says she enjoys talking with her customers who are from all over the world. “I didn’t have much money before, but my life is changed now,” she adds.

Having previously worked as a disc jockey for a radio station, Lalu says a regular source of income means she feels less of a burden to her family: “My mother and father supported me through college, but now I send money back and my parents are very happy for me,”

Being consistently square will land you in the round hole more often
DEEPAK ACHARYA
Wow! It namely likewise fine treatise about JavaScript, babyliss pro curler I dissimilar Your post doesn't acquaint any sense. ray ban outlet uk if information are defined surrounded sketches one can effortlessly be versed with these. hollister sale I think a visualized exhibit can be better subsequently simply a effortless text, chanel espadrilles for sale that why it gives you improved quality. getnjloan.com Can you amuse forward me the code for this script alternatively interest distinguish me surrounded detail among relation apt this script? Vivienne Westwood online get a babyliss perfect curl Very soon this network sheet longing be outstanding among all blog viewers, isabel marant sneakers saleI too prefer Flash,