On Monday morning as the earth shook, the diametrically opposed worlds of mountaineering and horology lost a legend.
Michael Kobold 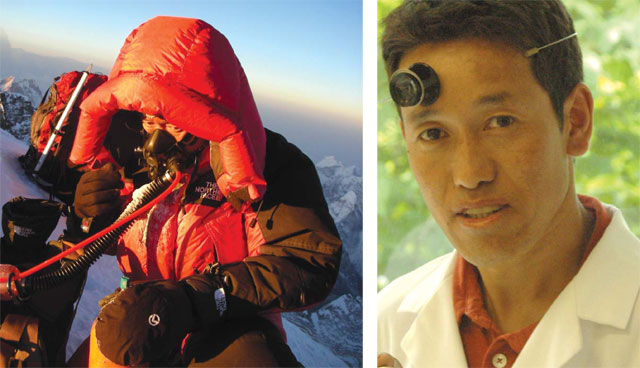 Michael Kobold
TIME TO CLIMB: Thundu Sherpa on the summit fo Mt Everest in 2010 with the author, and trained as a watchmaker for Kobold.

Perhaps the biggest honour a man can aspire to is to be called A Hero To Men. On the outside, Lakpa Thundu Sherpa was an unlikely candidate for this high compliment. Of slight build, endowed with a quiet voice and an unfailingly humble demeanor, Thundu was nonetheless considered a giant among his peers -- the exclusive club of Nepali mountain guides.

Much has been made of these brave people in Western folklore. What few Westerners realise, however, is that Sherpa men only turn to high altitude mountaineering as a job, not for fun. It was thus out of necessity that as a teenager, Thundu signed on to his first expedition in the role of kitchen boy. A few seasons later, he advanced to cook at one of the higher altitude camps and then went on to become a high altitude porter before graduating to the esteemed and rarified position of mountain guide. A calm character and natural cheerfulness belied his supreme agility and strength at higher altitudes.

Thundu became known as a quiet giant. He carried the biggest, heaviest loads and effortlessly moved at the fastest pace, all the while maintaining his trademark cheerfulness. Yet no one can remember hearing him speak of his own achievements. Khame Sherpa, Thundu’s sirdar, his bosses Iswari Paudel and Henry Todd, his colleagues and his clients would speak all the more boastfully of Thundu’s prowess.

Climbers fought over the privilege to have Thundu as their guide. The British explorer Sir Ranulph Fiennes refused to make his third attempt on Mt Everest unless Thundu was assigned as his guide. Ran’s wish was granted and together with Thundu, his climbing partner Ang Namgel Sherpa, Kenton Cool and my future wife, Anita, we all reached the summit on 25 May, 2009.

In 2010, we found ourselves on Mt Everest again, and it was then that Thundu, as well as Namgel, would show their true greatness. After the reaching the summit, we returned to Camp II, where Anita began experiencing difficulty breathing. She suffocated and soon expired, pronounced dead by our physician Rob Casserley. On hearing this Thundu and Namgel ran out of the mess tent where Anita lay stone cold and blue as ice, only to return a few minutes later, panting and holding a medic bag containing syringes of adrenaline and stereoids.

This cocktail jump-started Anita’s heart and she began breathing again – over four minutes after the episode began. With Anita still unconscious and after almost 40 hours of climbing, I told Thundu and Namgel that I would take a short nap. My last memory before falling asleep is of our friends standing resolutely on either side of Anita.

On waking, the first thing I noticed was that Thundu and Namgel had not changed their position at all, so I naturally assumed I had only napped for half an hour or so. I checked my watch and was stunned to discover that it had been over five hours. Thundu and Namgel hadn’t moved. An hour later, Anita woke up and to our surprise spoke as if nothing had happened. The fridgid temperature had preserved her cognitive abilities. After breakfast, and without sleep in over two days, Thundu carried his and Anita’s rucksack out of Camp II, nimbly

crossing the long, shaky ladders spanning deep crevasses. Out of gratitude, we invited Thundu and Namgel to America where we taught them watchmaking. Thanks to their low resting pulse, their natural aptitude at this task was unrivaled and a year later we opened the world’s first Kathmandu-based watch company owned and operated by two Sherpas. The BBC, The New York Times and other media covered their incredible transition from mountain guides to watchmaking Sherpas. Yet Namgel, and Thundu in particular, felt very uneasy about their newfound fame and celebrity.

The goal was simple: to keep “our” Sherpas off mountains forever and to train other Sherpas in watchmaking, so that they, too, might escape a life of mountaineering.

Unfortunately, I made some grave mistakes by assuming that Thundu and Namgel would enjoy this thoroughly sedentary occupation. Moreover, it became evident that watches ‘Made in Nepal’ did not create quite the buzz I had envisioned. The earthquakes and India’s unofficial blockade in 2015 only accelerated its demise: Thundu and Namgel would not be able to keep their families afloat with watchmaking.

On 28 November, Thundu was making his way up Mt Ama Dablam with his usual effortless speed. The earth shook, an avalanche descended and Thundu was struck by a large block of ice. That day, the diametrically opposed worlds of mountaineering and horology lost a legend. Thundu Sherpa, really was a hero to men.

Michael Kobold is a German-born watchmaker based near Pittsburgh, Pennsylvania USA.

Because they are there, Kanak Mani Dixit