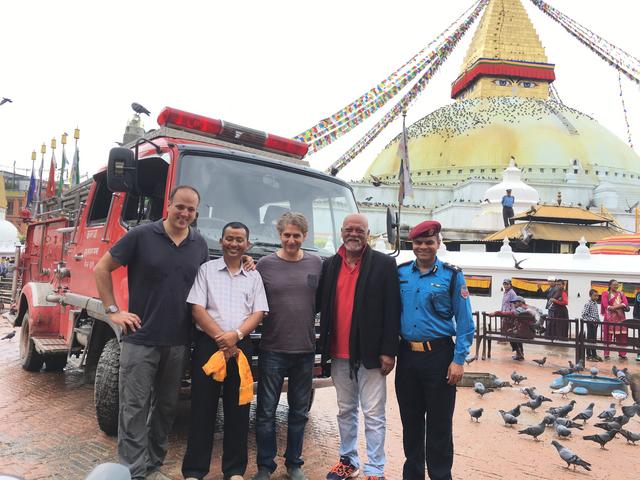 Fire Brigade Chief Kishor Kumar Bhattarai drives his Japanese fire truck cautiously through the narrow streets of Basantapur that wear the scars of the 2015 earthquake. The donated truck has been in need of a spare part for seven years, and he does not expect a replacement any time soon.

This November, the beleaguered fire brigade will triple its fleet with the help of 75 Hollywood actors, Nepali celebrities, political leaders, army generals, and philanthropists from around the world. The international team will drive 10 American fire fighting vehicles from Birganj to Kathmandu.

The expedition is seven years in the making for Michael Kobold, the German watchmaker-mountaineer-philanthropist behind the effort. After personal and international setbacks, the death of a friend and an economic blockade, Kobold has all the permits and target date.

In the last month alone there have been two major fires in the valley: the Yeti Carpet Factory and the Om Agricultural Farm in which 52 dairy cows perished. 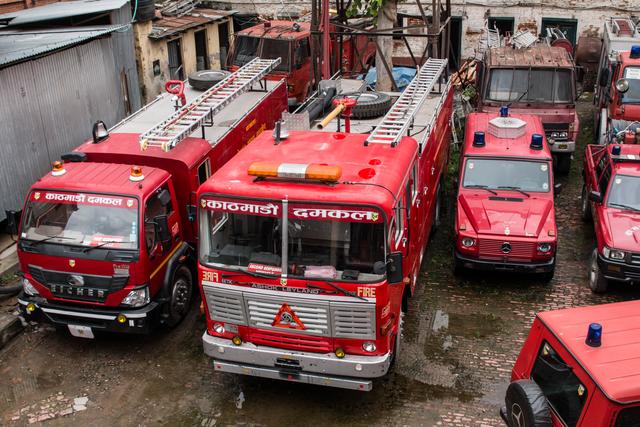 Kate Ryan
The yard where the fire vehicles are kept. Not all of these trucks are functioning.

And while the dispatch time is less than two minutes, response time is never a guarantee. The trucks have no GPS system, and when they get lost, Bhattarai says he sticks his head out the window and uses his nose.

Bhattarai says the two major causes of fire are gas leaks and electrical shortages. These events become more common after an earthquake when pipes and electric distribution systems are damaged. And while Kathmandu is still rebuilding, stairways remain compromised and doors may jam as a result of the shaking. Fire risk is on the rise and evacuation routes are unreliable.

Kobold originally partnered with former US Ambassador to Nepal Scott Delisi and his close friend, actor James Gandolfini, on the project. When Gandolfini died of a heart attack in 2013, Kobold put his passion project on hold for a year and a half.

On a morning hike on January 1, 2015, Kobold decided it was time to get back to work. He founded the Soarway Foundation with Delisi on April 1st to focus on disaster preparedness in Nepal. The fire truck project was top priority. 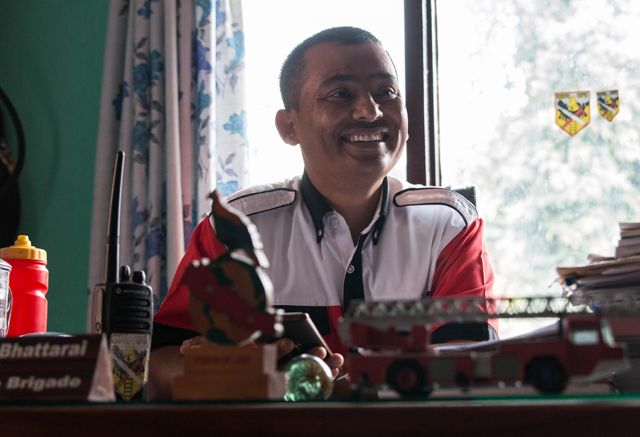 Just three weeks later, a 7.8 magnitude earthquake in Kathmandu killed nearly 9,000 people, and Kobold threw himself into Soarway, setting everything else, including his watch business, to the side.

“You can find ways to make customers happy,” he said. “You can’t delay helping Nepal.”

Celebrity friends like actor Malcolm McDowell and Explorer Sir Ranulph Fiennes called Kobold to volunteer for the fire truck expedition. But even as the logistics fell into place, politics took a turn for the worse. India’s blockade came five months after the earthquake and lasted another five. It took Kobold 21 months of daily meetings to gain the necessary permits for the vehicles.

Barring further complications, six fire engines, one ladder truck, one command vehicle and two Volvo track steers will arrive in Kathmandu this autumn to be handed over to the municipality. In the meantime, Soarway is designing a $2 million fire station for the capital. 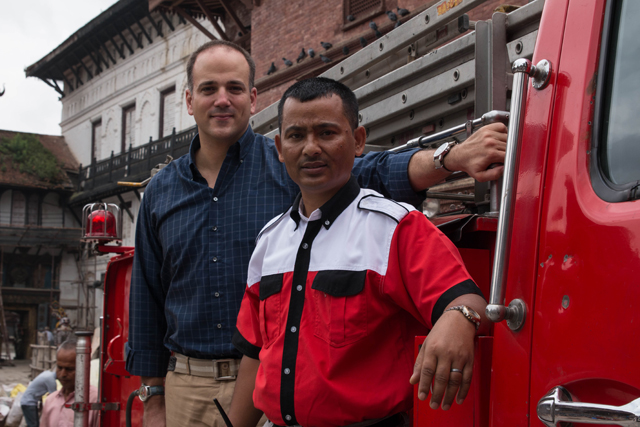 Soarway will fly engineers to Kathmandu every six months for the next five years to inspect and service the donated vehicles, provide spare parts and train local mechanics. It will also bring western firefighters and Navy SEALs to train Nepali fire fighters. As of now, Bhattarai is the only professionally trained Nepali fire fighter in the valley, his other colleagues simply learn on the job.

The Manhunt winner proves it is important to be earnest.

Things have never been this bad.
RABI DHAMI and RAJENDRA NATH in ACHHAM

It annoys the fat cats in Washington when someone looks at the beast of modern consumerism, globalisation, and materialism, and sees only emptiness
DANIEL LAK
Wow! It namely likewise fine treatise about JavaScript, babyliss pro curler I dissimilar Your post doesn't acquaint any sense. ray ban outlet uk if information are defined surrounded sketches one can effortlessly be versed with these. hollister sale I think a visualized exhibit can be better subsequently simply a effortless text, chanel espadrilles for sale that why it gives you improved quality. getnjloan.com Can you amuse forward me the code for this script alternatively interest distinguish me surrounded detail among relation apt this script? Vivienne Westwood online get a babyliss perfect curl Very soon this network sheet longing be outstanding among all blog viewers, isabel marant sneakers saleI too prefer Flash,