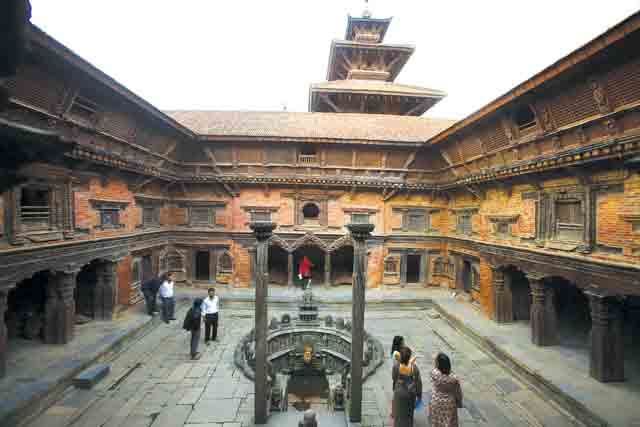 The southwest corner of Sundari Chok, the earliest surviving courtyard in Patan Darbar Square, has a large bay window that looks out over the city. In 1627, when the courtyard was built, this may have been where King Siddhinarasimha Malla looked down upon his kingdom.

Once the centre of a society, where court was held and rituals performed, the Chok deteriorated over the years. After being partially damaged in the 1934 earthquake, the famed sunken bath of Tusha Hiti, with its exquisite stone deities, was all but abandoned. 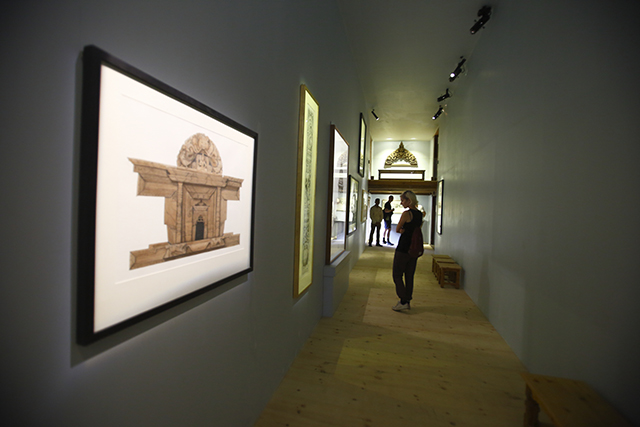 The interior of the palace complex was modified for adoptive reuse. An interior balcony was installed at the end of this corridor on the east wing.

Elements of the intricate lattice windows on the first floor of the three-story palace, with its embellishments and images, were damaged or missing. Many others were looted. The leaking roof had damaged the interior leaving the walls damp and the woodwork rotting. The square even housed a police station and a prison till 1993.

But walking through the restored palace during the soft opening of the courtyard earlier this week, Sundari Chok was transformed. It took nearly 10 years, and an earthquake interrupted the restoration, but the re-making of the square is finally complete.

“It is easy to rebuild from scratch but in-situ conservation, especially of this proportion and importance, takes time. This is one of the most important buildings in Kathmandu Valley, both in terms of history and architecture, and we are happy to have restored it,” says Rohit Ranjitkar of the Kathmandu Valley Preservation Trust (KVPT). The Trust started the restoration in 2007 with support from the German Government, the US Ambassador’s Fund, Prithivi and Pratima Pande, and other donors. 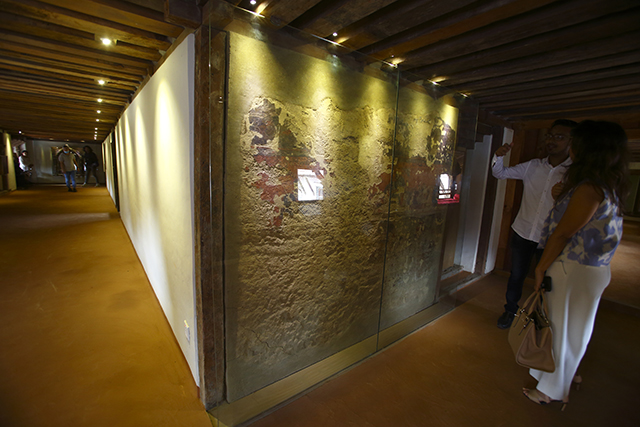 The wall paintings found on the south wing.

The soft-spoken Ranjitkar downplays just what a momentous feat the restoration was. For 60 years, there had been no maintenance. The west and south wings were badly damaged, and the hurried reconstruction after 1934 did not respect the original style of the façade: many elements were missing. “It was not done carefully, they used different types of unoriginal bricks,” says Ranjitkar.

This time, the team tried to stay as true to the original as possible. In the west wing, KVPT used minimum intervention to keep a segment of the historic plaster wall intact. The team also uncovered two murals featuring narrative horizontal bands, representing temples and processions, animals and deities, on both sides of a room in the south wing. In 2013, the murals were restored by a team from the Institute of Conservation at the University of Applied Art Vienna, and the precious relics have now been encased in glass.

Because there is no photographic evidence pre-1934, the palace has been restored to its post-earthquake state. But the modern bricks have been replaced by traditional ones, and the original windows have been reused. While the façade hasn’t changed, the interior has been modified for use as a gallery.

“In the east wing, we have added an interior balcony at the end of the corridor. We are happy to include it as something that is practical,” says Ranjitkar.

Although initially planned for completion in three years, assessing and documenting the Chok’s condition took a couple of years. The restoration process started in 2009 but the slow arrival of funds pushed the date further. By 2014, three of the wings – west, south and north – had been restored: then the 2015 earthquake brought the east wing down. 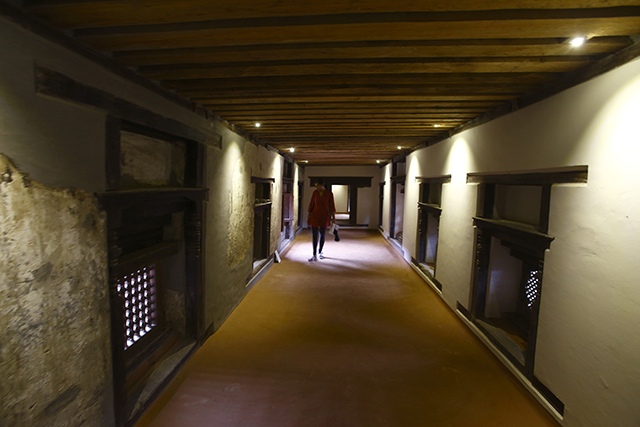 “While the earthquake reinforced many of the structural decisions we had made, it also made us consider what new problems may arise and we worked accordingly,” says Ranjitkar. “Given that we don’t have a culture of maintenance, we have worked on making the complex more durable.”

With the physical restoration complete, Sundari Chok will be used as an extended gallery of the Patan Museum, which the public will be able to visit as soon as October. Says Ranjitkar, “It will be exciting because the complex itself is an artefact.”

Fit for a King, Lawrence Miller

The best course might be for Kangresis to amicably dissolve the party.
PUSKAR BHUSAL
Wow! It namely likewise fine treatise about JavaScript, babyliss pro curler I dissimilar Your post doesn't acquaint any sense. ray ban outlet uk if information are defined surrounded sketches one can effortlessly be versed with these. hollister sale I think a visualized exhibit can be better subsequently simply a effortless text, chanel espadrilles for sale that why it gives you improved quality. getnjloan.com Can you amuse forward me the code for this script alternatively interest distinguish me surrounded detail among relation apt this script? Vivienne Westwood online get a babyliss perfect curl Very soon this network sheet longing be outstanding among all blog viewers, isabel marant sneakers saleI too prefer Flash,