Rock climbing is not just for experienced mountaineers, but a vertical workout for city dwellers as well
Clare Hennig 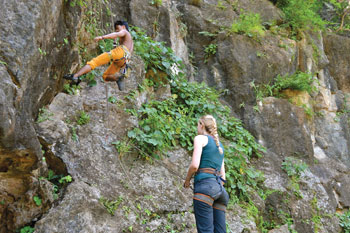 Nepal is world-renowned for its mountains and hiking trails but, for those working a day job in Kathmandu, it can be difficult to make an escape to the great outdoors. An alternative to week-long treks in the Himalayas? Hit the rock faces on the Valley rim.

Bikash Gurung, a freelance guide who has been climbing nearly every day for the past six years, says although the rock climbing community in Nepal is still small it is slowly but surely gaining followers. “Rock climbing is not big yet, but in the next five years, it will be and people will begin coming to Nepal just to climb challenging rock faces,” said Gurung who takes aficionados to nearby cliffs in Nagarjun and Hattiban which have routes set up.

Nagarjun Forest with 17 pitches reaching up to 40 m, is only 20 minutes away from the city centre and is a good place for beginners. Balaju is a half hour away and has nine routes from grades 4a to 7b+, as well as an overhang and a 65m multi-pitch. Hattiban is an hour’s drive south of Kathmandu and has numerous routes with varying difficulty levels.

The Nepal Mountaineering Association and Nepal National Mountain Guide Association have been promoting rock climbing in recent years, offering courses to college students and opening new routes. As roads expand in Nepal, more and more climbing sites will be accessible to drive-by climbers. 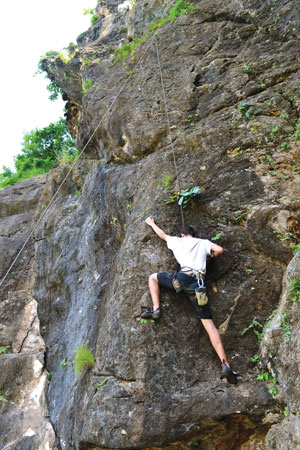 The problem at the moment, Gurung said, is one of funding. “They have a limited budget and it takes a lot of money to open just one climbing spot,” he said. “But there are plans to open a sport climbing route in the Himalaya area, probably near Annapurna.”

“Most of the people who come to us are beginners,” he said. “They just want to go and have the experience. It’s much cheaper to learn here than in North America or Europe.” 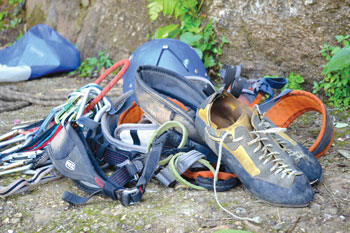 Hardcore offers day trips to Nagarjun Forest ($55 including lunch, transport and equipment) as well as a four-day rock climbing clinic ($250) which is available for four consecutive days or over several weeks, depending on the climber’s schedule.

“For the climbing clinic, we teach everything from belaying and anchoring to lead and sport climbing, as well as rescue skills,” said Chandra. “It’s a really good basis and you receive a certificate of completion at the end.”

Rock climbing is addictive and many new climbers can’t help coming back for more. One of them is Alexis Amini, 21, who is in Nepal for three months doing a research project. He has been to Nagarjun twice, and is taking the two-day climbing trip this weekend. 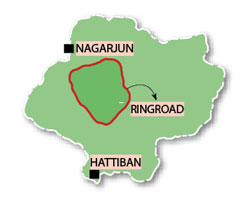 “I first went rock climbing for an adrenaline rush,” Amini said. “I most definitely want to continue it here, I’m thinking of actually taking the four-day training course. And I would like to comeback – not only for rock climbing, but also caving and canyoning.”

In addition to cliff-side outdoor climbing, there are also couple of climbing gyms for a quick practice in the evenings after work: Astrek Climbing Wall in Thamel and Pasang Lhamu Sports Climbing Centre in Maharajganj.

The bond between our children and their grandparents, the same thing that gave the Cro Magnon the edge over their ugly Neanderthal neighbours, is ignored.
DANIEL LAK

Nation in favour of Maoist proposal

Profits all the way for NOC