On location with Kesang Tseten

Capturing a village over an entire year to create a 60-minute film is just that: minute details that evoke something larger about that community
Kate Ryan in RASUWA

Kesang Tseten whistles as he hikes up the steep mountainside. Sweat runs down his back, but he keeps a steady pace, leaning on his long umbrella turned hiking pole. He stops occasionally to comment on the changing landscape, or simply to marvel at the scenery.

“Sometimes I wonder if this is a job,” he says, taking in the sight of the Bhote Kosi Valley and the forested slopes beyond.

Tseten has the curiosity of a young student, and his hunger to understand humanity propels the documentarian into each film. Now it pulls him back to the villages of Tetangche and Simbu, the site of his 2006 film, We Corner People, about villagers who sought help to build a suspension bridge. 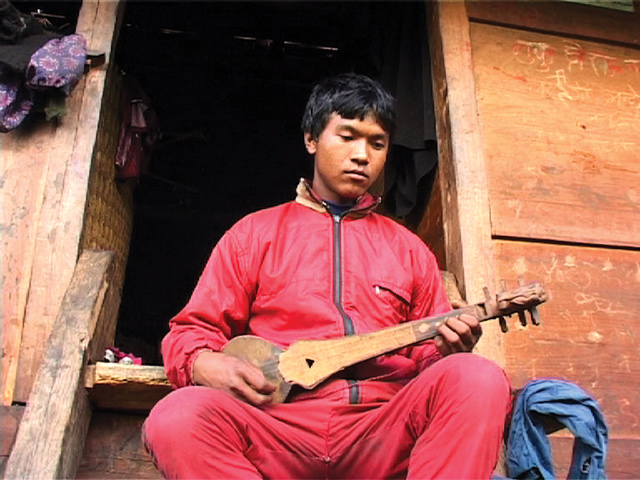 SONG OF LOSS: A still from Kesang Tseten's 2006 documentary We Corner People that shows Lhakpa, whose young wife was swept away by the river, and who will appear again in the film's sequel.

As a young man, Tseten wanted to be a writer and earned a journalism degree from Columbia University. His strong sense of narrative eventually led him to film, and Tseten is now one of Nepal’s best known documentarians, with award-winning films including Who Will Be a Gurkha, In Search of the Riyal, and Castaway Man.

People often ask Tseten who his target audience is. His answer is simple: himself.

“You’re not saying ‘I’m doing this because it might look good.’ You’re going there, driven, compelled to go there, because how do they blast the mountainside? How do they work? How do these people interact? How do they eat dinner? How do they do whatever they do, you know?”

Tseten has to satisfy a self-interest first, to work from the inside-out. “My sense of meaning of film is to understand and then to illuminate or carry understanding to others, not to give answers,” he adds.

He is interested in people, their situations, discovering what makes them tick. But he tries to walk a fine line in the relationships he forms with his subjects. In order to prompt spontaneity, he needs to maintain distance, an edge. He does not want people to expect him to help the community beyond sharing its stories. 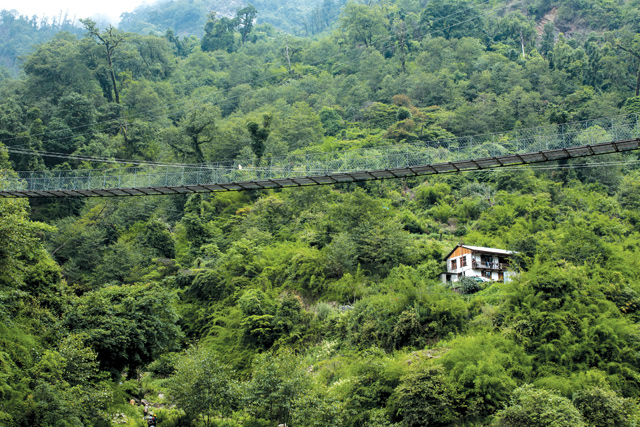 Still, Tseten visits the family of a 12-year-old girl whose vision is severely impaired. She requires photophobia glasses, so Tseten delivers two pairs special-ordered from Switzerland. “You help because you are a human being first,” he explains. “You run the risk that this will affect how they talk to you, but you feel compelled to do it. It’s an imperfect thing.” Perhaps Tseten does cross the line he has drawn for himself, but when you are in the business of illustrating the human condition it is easy to fall into the trap of caring about people.

It is likely due to his calm and generous approach to others that Tseten’s crew comes back to work with him again and again. Bishnu Kalpit is a sought-after cinematographer who works for news organisations like Al Jazeera, but he chooses to leap across rivers and run his camera up mountains to work with Tseten. And Shyam Karki is a fiercely loyal shooter, manager, jack of all trades who works for Tseten’s company and has assisted on three of his films. 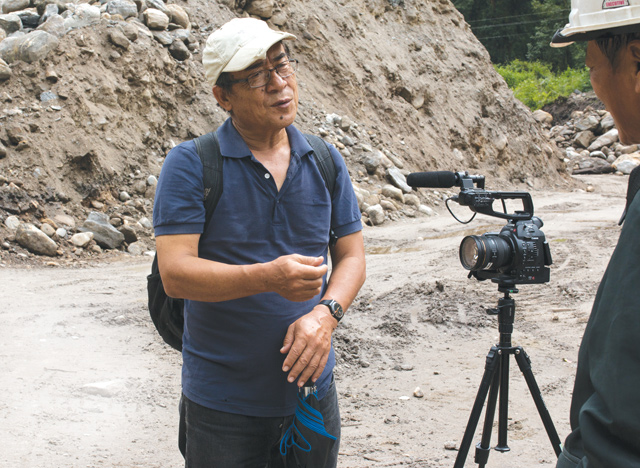 Pics: Kate Ryan
A BRIDGE NOT TOO FAR: Documentary filmmaker Kesang Tseten revisits the village in Rasuwa where, 11 years ago, he shot We Corner People, in which the villagers built this bridge (top). The new film will deal with the transformation of this once-remote part of Nepal.

The trio eat, sleep, work, and joke together with ease. They will return three more times this year to film here. Their challenge is to represent, in one film, how the passage of time and rapid development affects an entire community.
“To me, film is like mime,” says Tseten. “You reduce big gestures to small ones.” Capturing a village over an entire year to create a 60-minute film is just that: minute details that evoke something larger about that community.

After a long day of interviews, Tseten props himself up on his elbow in a small wooden bed. “At the end, your film is a reflection of your experience and making sense of that experience. It is the illumination,” he says. “Happiness is absorption.” 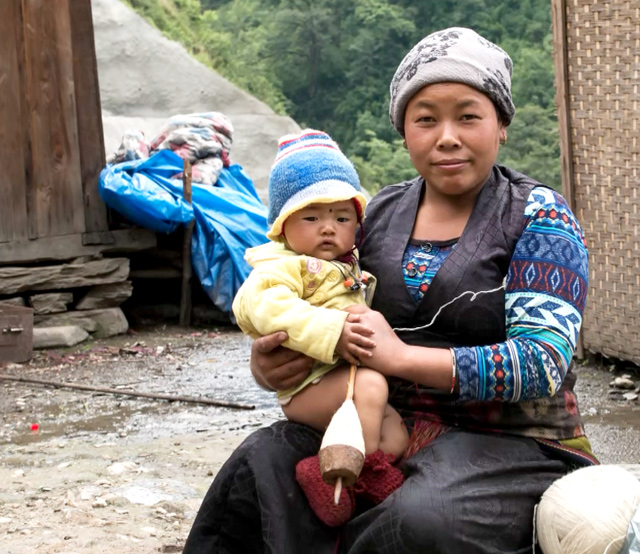 When Kesang Tseten produced We Corner People in 2006, there were no roads, no shops, no infrastructure in the remote villages here in Rasuwa, near the Chinese border. The journey to sell woven baskets in the nearest town took days and cost money. And people feared the river.

A flood on the steep stream near Tetangche and Simbu had just taken a young girl’s life, and the village wanted a bridge. The aid group Helvetas commissioned Tseten to make a film about the construction process and people who felt confined to a corner of Nepal.

Tseten returned last week to the characters of his 11-year-old film to document how much the place and people have changed.
Among the most visible transformations along the Bhote Kosi gorge are the new hydropower projects and the busy new road, the only highway to China after the earthquake destroyed Kodari.

“I think the first film resonated with Nepalis, who identified with being small,” said Tseten. “In fact, Nepal is not small with 28 million people. But beside China and India, and economically not being very well developed, people have a sense that they’re nobodies, or people in the corner. Development is passing them by.”

Today, the Bhote Kosi Valley reverberates with the sound of dynamite and heavy vehicles. Workers drill tunnels and build new roads and more bridges. Chinese contractors at the hydropower project left after the earthquake, and the bulk of the work now is done by Nepali builders, some from nearby villages.

The river that once took a life is harnessed for 57 megawatts of energy. And a region with no previous economic viability is a boon for Nepal's development.

Such dramatic change creates an interesting opportunity for Tseten. His first documentary is now archival footage, and the construction along the river acts as a timeline for the people living in it.

Babies were born into a village that now has roads, phones and cash exchange. Elders died. Earthquakes tore down homes. Buddhists converted to Christianity and back again. And the corner people have direct links to the rest of the country, and the world.

“It’s hard to show exactly how much a person has changed,” Tseten said. “But measured against the physical changes of the hydropower, it becomes much clearer.”

Tetangche and Simbu may have evolved since We Corner People but so, it seems, has the director. Tseten has turned to an observational approach to film in recent years. He looks to filmmakers like Frederick Weisman and the Maysel Brothers for inspiration, and puts more thought into the role of the camera. To whom is the subject speaking, really? By focusing more on intrapersonal conversations, Tseten finds his subjects more natural and dynamic.

This is essential, given that most of the characters will know Tseten from last time, and it is hard for them not to act too friendly on camera. Each character has only 6-7 minutes of screen time, so Tseten must represent a full and complicated human being in less than 420 seconds. In a documentary, the editing moulds a character and makes or breaks a story, Tseten said. Despite knowing the characters, he cannot say yet for sure what this film will be.

“You go about fine-tuning which characters will fill the canvas, will create the complexity of the village you are seeing, the reality,” added Tseten, who looks forward to the challenge of documenting the evolution of the place.
“Of course you have your preconceived notions,” Tseten explained. “The first time I came ostensibly for ‘What is the bridge for?’ That was the starting point. But as it happens, people are more complex.”

This time, the director is wide open to the possibility that the story will be something unpredictable. He is revisiting people, but also rediscovering Tetangche. The last film was about a community afraid of the river. This time the story will be about the community controlling it.

Interview with UML politburo member Pradip Gyawali in Chhalphal, 19 December
Wow! It namely likewise fine treatise about JavaScript, babyliss pro curler I dissimilar Your post doesn't acquaint any sense. ray ban outlet uk if information are defined surrounded sketches one can effortlessly be versed with these. hollister sale I think a visualized exhibit can be better subsequently simply a effortless text, chanel espadrilles for sale that why it gives you improved quality. getnjloan.com Can you amuse forward me the code for this script alternatively interest distinguish me surrounded detail among relation apt this script? Vivienne Westwood online get a babyliss perfect curl Very soon this network sheet longing be outstanding among all blog viewers, isabel marant sneakers saleI too prefer Flash,