Destroyed in the 1934 earthquake, Patan’s Bhaidega temple is finally being rebuilt after the 2015 disaster
Sahina Shrestha 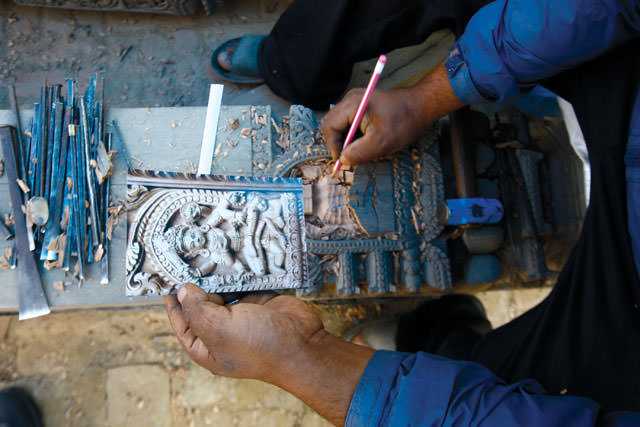 Bikram Rai
CARVING A NICHE: A woodworker carves a strut for the Bhaidega reconstruction in Patan based on old photographs.

In a city whose temples and squares are part of the living culture, it pains 70-year-old Mohan Maiya Jha that no one is coming to offer prayers at the Bhaidega temple in the southwest corner of Patan Darbar Square. Jha’s family has been performing the ritual worship at the Shiva temple for generations.

While devotees throng nearby temples, hardly anyone worships the structure at the edge of the square. The temple has also been largely forgotten by Guthi Sansthan, the agency responsible for supporting festivals and cultural activities.

Bhaidega is a story of why it is important to preserve physical monuments in order to save Kathmandu Valley’s intangible heritage.

The temple before it was destroyed in the 1934 earthquake, and after .

The temple is now being restored based on its original three-tiered pagoda design, and Jha is hopeful the temple’s importance will also be restored: “People will come to pray and maybe there will even be a huge mela during Srawan Mondays dedicated to Shiva.”

Unlike other temples in Patan’s palace square, which were built by royalty, Bhaidega was erected in 1678 by a commoner, Bhagirath Bhaiya, who rose to become part of the city’s nobility. It commemorated the Shiva temple at Kashi Vishwanath in Banares that was destroyed on the orders of Moghul emperor Aurangezeb nine years earlier. Bhaidega was the second-tallest temple in the square before it collapsed in the 1934 earthquake. While many of the others were restored to their original form, Bhaidega was ironically rebuilt in the Moghul stucco dome architectural style.

“We felt the need to go back and restore the temple because so much of the ambience of the Kathmandu towns was lost as we couldn’t manage to rebuild everything in 1934,” recalls Kanak Mani Dixit, vice-chair of the Cultural Heritage Preservation Group that was formed by a group of citizens to rebuild the temple. “It needed to go back to its original form, not only out of respect towards the person who built it but also for the people who have appreciated that temple through the centuries.” Reconstruction had started on 26 February 2015, exactly two months before the earthquake.

With assistance from well-wishers, conservation architects, historians and activists, the group located photographs of the temple in the collection of Felix Brandt in Germany. Taken around 1920, they helped provide a sense of the size and original design of Bhaidega. 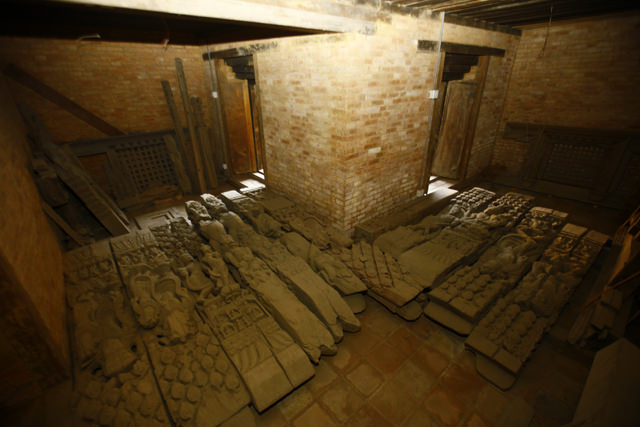 Intricately carved wooden struts from the temple that were stored in Patan Museum.

Carved wooden struts and pillars from the temple were discovered in the Patan Museum storeroom, and a detailed watercolour of the woodwork of the first-floor struts, made by Henry Oldfield in 1853, helped confirm they belonged to the temple and provided a guide for the new woodwork.

Rebuilding slowed after the 2015 earthquake as attention was divided, but the interruption was also an opportunity to build back better, says conservation architect Rohit Ranjitkar. “Before the earthquake, plans were to rebuild on the existing foundation and plinth but after the earthquake we investigated the foundation and strengthened it as well. If small interventions and improvisations make it safe, why not do it,” Ranjitkar told us. 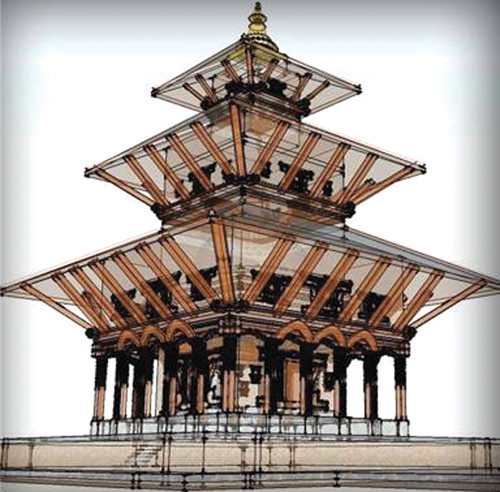 An architectural drawing of the Bhaidega restoration.

Reconstruction is staying as true as possible to traditional methods, using wood, mud and bricks, while ensuring that the temple is structurally sound. Foundation work is now complete and the carved doors of the ground floor have been installed.

“Times have changed and we don’t have guthis like before to carry out maintenance from time to time. Moreover, resources, skills and knowledge are getting scarce so we need to plan for long-term,” says Ranjitkar.

Half the estimated Rs60 million for the restoration has been contributed by Lalitpur Municipality, the Norwegian Embassy and Prithvi Pande of Nepal Investment Bank. The project could be completed in less than three years if the balance can be raised.

Once completed, Bhaidega will once more be the second tallest temple in the square, and it is hoped that the project will not only act as an economic catalyst but also a means to revive historical interest, reinforce local identity, as well as motivate craftsmen to carry out similar projects elsewhere.

Says Dixit, “The longer you wait to rebuild tangible heritage, the weaker your intangible culture will get.”

Some lessons from other peace processes
ELIZABETH SELLWOOD

Outgoing Australian ambassador, Graeme Lade spoke to Nepali Times about delays in West Seti, resettlement of Bhutan refugees and growing interest among Nepali students to enrol in Australian universities.
Wow! It namely likewise fine treatise about JavaScript, babyliss pro curler I dissimilar Your post doesn't acquaint any sense. ray ban outlet uk if information are defined surrounded sketches one can effortlessly be versed with these. hollister sale I think a visualized exhibit can be better subsequently simply a effortless text, chanel espadrilles for sale that why it gives you improved quality. getnjloan.com Can you amuse forward me the code for this script alternatively interest distinguish me surrounded detail among relation apt this script? Vivienne Westwood online get a babyliss perfect curl Very soon this network sheet longing be outstanding among all blog viewers, isabel marant sneakers saleI too prefer Flash,