Carl Pruscha’s two-volume compendium, the second edition of the work first published in 1975, is an invaluable resource for anyone interested in the architectural and urban history of Nepal's capital.

Kathmandu Valley 1 and 2 contains a comprehensive inventory of over 800 monuments, each building exquisitely mapped in its urban context by Rem Ratna Bajracharya with information-packed description by Prayag Raj Sharma. And to give it some perspective, the first volume also zooms out with the detailed aerial photography of Erwin Schneider. 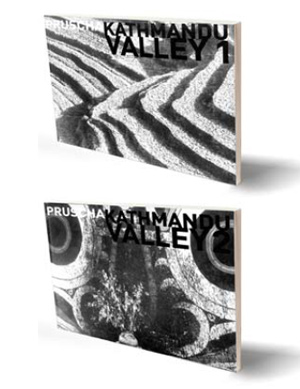 The consistency and quality of the research produced over 10 years by staff within the Department of Housing and Planning of the Government of Nepal is extraordinary. While preservationists and students of the Kathmandu Valley’s historic architecture may look elsewhere for more detailed drawings and descriptions of individual buildings (such as the work of Wolfgang Korn, Niels Gutschow and Bijay Basukala, among others) Kathmandu Valley 1 and 2 stand out as an all-inclusive survey of the Valley’s built environment as a whole.

In addition to its importance as an archive, the book is also a fascinating record of a moment in which international architects played a critical role in shaping the development discourse in the Third World. In 1964, the Austrian architect Carl Pruscha was 30 and had just completed his postgraduate studies at the Harvard Graduate School of Design, when he was sent to Nepal by the UN to serve as an expert consultant to the government.

His assignment was initially limited to 1 year, but was extended to 10, during which he worked as Project Coordinator at the National Planning Commission. The first edition in 1975 of this publication is the outcome of a decade of work undertaken during Pruscha’s involvement with the then His Majesty’s Government. During his time in Nepal, Pruscha also practiced as an architect, completing notable structures including the CEDA building in Kirtipur, the Taragaon Hostel in Boudha, and a housing project for Tibetan refugees, all of which forged a modern architectural idiom using local brick construction techniques.

As a comprehensive inventory, the two volumes attest to the diversity and density of Kathmandu’s architectural heritage like few other books have. While documenting the iconic ‘monument zones’ within the Valley, they even include more modest artefacts such as hiti and chaitya, not to mention several Rana-era structures that have received very little attention from architectural historians. Given that most Rana-Shah palaces, unlike those of the Malla-era, are still inaccessible to the general public, many will find this section of the book particularly revealing. Rana palaces, like Singha Darbar, are also shown.

In addition to a ‘protective inventory’ of cultural heritage sites, the book also includes a physical development plan for the Valley. This is perhaps the most interesting aspect of the book, since it goes beyond the mere selection of cultural heritage sites to project a vision for the future of the Valley around a ‘multi-nucleated growth pattern’, in which urbanisation is pushed towards the outer edges, allowing fertile agricultural land to be utilised.

The planning strategies outlined in this section of the book may be contentious and outdated, but nonetheless serve to enrich our understanding of the Valley. Given that the task of planning has never been more urgent in a Valley that is suffering from the adverse impacts of unregulated urbanisation, this is a timely publication that alerts us to what has been lost, and what can still be recovered.

Pruscha's work and the new edition of the book were supported by UNESCO and the Austrian Federal Chancellery.

Glimpses of the photographs and maps of places of cultural significance from Carl Pruscha’s Kathmandu Valley, with pictures taken today of the same location. Unlike these sites, most others in the original book are gone.

This 19th Century Shikara-style terracotta temple is located on the banks of the Bagmati. It wasn’t in good condition even in 1975, and has not been repaired.

Aki Baha 18th century vihara in Nyadha of Patan that was renovated in 1802. It is now dwarfed by taller concrete structures.

Ganesh Temple This three-storey temple in Patan’s Kwalakhu dates back to 1853 and was always sandwiched between two structures. Now it is dominated by much taller buildings.

Singha Darbar Built by Kumar and Kishor Narsigh for Chandra Shumsher in 1903. Became government secretariat in 1950. Only the façade survived the 1973 fire, but it was heavily damaged in the 2015 earthquake.

The hush of centuries, Kunda Dixit