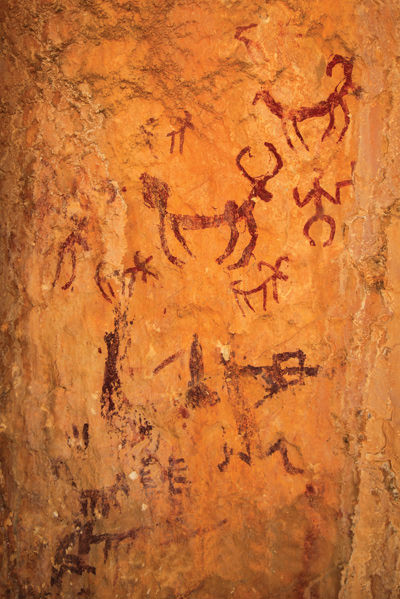 Till now, the most interesting archaeological finds in Upper Mustang were sky caves containing human remains 1,500 years old, and scriptures and textiles suggesting the region’s links to the ancient Silk Road.

But recently, Fidel Devkota, an anthropologist has discovered 90 rock paintings made of red and yellow ochre that he says could rewrite the history of the people of this part of Nepal that juts into the Tibetan Plateau. The paintings of wild yaks, horses and other animals, with depictions of the crescent moon and human figures, were found on rock faces in the Kya and Ludak Valleys in the eastern part of Mustang.

“The paintings and inscriptions are different in style, execution, composition and placement, suggesting that they are from various historical periods,” says Devkota, who had been documenting the impact of climate change in Mustang for the past 10 years when he came across the rock art which are in such a remote location, even local herders didn’t know of them.

At the Kya Valley site, the paintings were found on a cliff facing southeast towards Bhrikuti Himal, and although the Ludak rock art site is exposed it was only found three years ago. 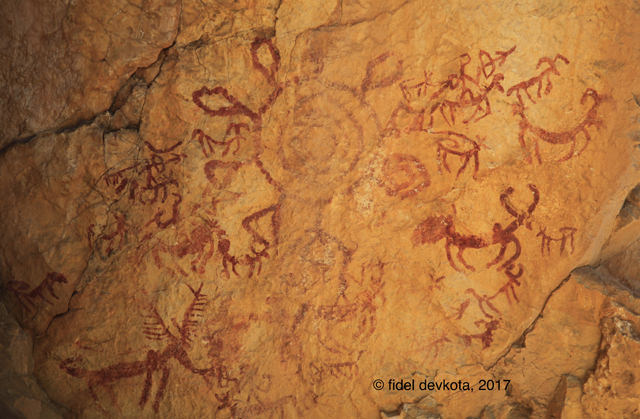 Devkota collaborated with John Vincent Bellezza, an archaeologist and cultural historian specialising on Tibet, and the two have jointly published a paper, ‘Obscured for Centuries: The Lost Rock Art of Lo Mustang’, documenting the discovery.

As carbon dating has not yet been done, Belleza compared the rock art and inscriptions, based on Devkota’s photographs, with the rock art in western Tibet, Sipti and Ladakh. He dates some of the paintings as far back as pre-7th century CE.

“The first phase of paintings is prehistoric but the later phases are clearly motivated by Buddhism and Yungdrung Bon religious practices,” writes Devkota in the paper. The rock art depicts hunting and other wild animal-human interaction, birth giving, anthropomorphic portraits, tiered shrines and other sacred symbols. Belleza writes that the rock art in Kya and Ludak focuses on the beliefs, values and activities of the painters, although pinpointing their specific traditions is difficult. It is also difficult to discern whether the artists were pastoralists or agriculturists or both.

Given that the Shar-ri region was visited by prominent masters of Tibetan Buddhism and adherents of the Bon Po, Devkota writes that more detailed examination of the rock art and other sites may lead to identification of important centres of the faiths here. He also notes that the pigments have faded and some of the relics have deteriorated, while the sites are vulnerable to rock slides and erosion, revealing an urgent need to protect the sites from rockfalls and the harsh climate of the plateau.

Says Devkota: “Even  if we cannot preserve it on site, we should at least have proper documentation for the future because if we lose it now, we may never fully understand what these works represent.” 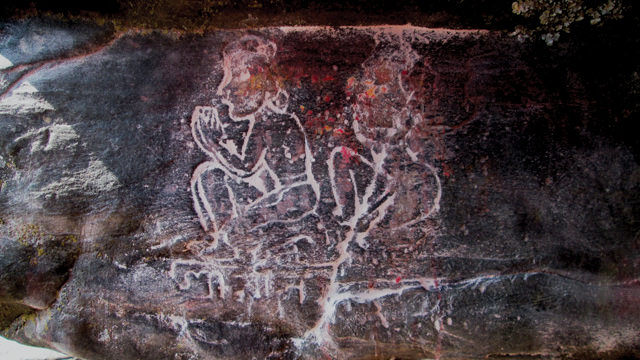 Professor Purushottam Lochan Shrestha was on a field visit to Changu Hill overlooking Kathmandu with his students four years ago when a shopkeeper mentioned paintings in the nearby Kalika Gufa. Curious, Shrestha found the cave and came upon hitherto unknown art works from the Malla era.

There were paintings of a helmeted soldier, another of Hanuman carrying a mountain and two others of King Pratap Malla kneeling.

To the south of Bhaktapur in Tathali, Shrestha later discovered rock edicts from the Malla period carved into three huge rockfaces. The 15 inscriptions dating back 700 years mention that the rocks from here were used to build the Vatsala Temple in Bhaktapur, which came down in the 2015 earthquake. There are also paintings of elephants and horses. 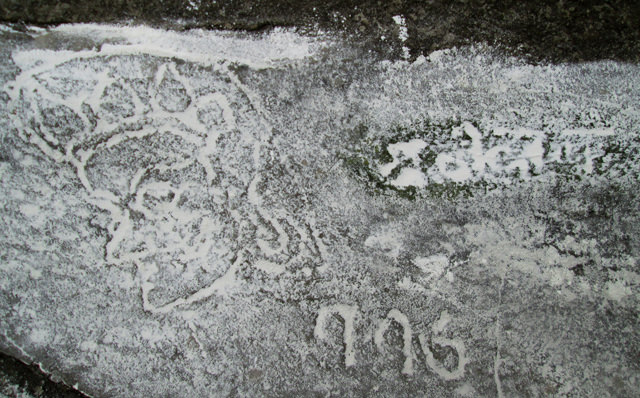 Since the findings, Shrestha has been on a one-man search, without any government help, for other cave and rock inscriptions that could throw more light into the early history of Kathmandu Valley.

“Rock paintings and inscriptions provide a rare window to our history: we need more research,” says Shrestha, who has documented the findings in a recent book, Guha, Guhalekh, Guhachitra ewam anya Sampada. “There are rock quarries with ancient paintings that are in danger of being lost forever.”

Jomsom in the off-season, Sean Shoemaker

Pick your cause. Hone your outrage. Get to work.
DANIEL LAK
Wow! It namely likewise fine treatise about JavaScript, babyliss pro curler I dissimilar Your post doesn't acquaint any sense. ray ban outlet uk if information are defined surrounded sketches one can effortlessly be versed with these. hollister sale I think a visualized exhibit can be better subsequently simply a effortless text, chanel espadrilles for sale that why it gives you improved quality. getnjloan.com Can you amuse forward me the code for this script alternatively interest distinguish me surrounded detail among relation apt this script? Vivienne Westwood online get a babyliss perfect curl Very soon this network sheet longing be outstanding among all blog viewers, isabel marant sneakers saleI too prefer Flash,