It started within hours after the earthquake struck two years ago. As if in fire-drill mode, the Kathmandu Valley Preservation Trust (KVPT), along with Patan’s local community, immediately went into action to salvage precious religious objects from the ruins of fallen temples.

Volunteers collected carved wooden columns, stone and metal figures of deities, even the bronze statue of Yog Narendra Malla that had toppled, and put them in the Patan Museum courtyard for safekeeping.

Two years after the earthquake, the monuments of Patan Darbar Square are encased in steel scaffolding, awaiting careful restoration and rebuilding.

“If the funds come in on time and there are no bureaucratic hurdles and controversies, the monuments here can be rebuilt in three years,” says KVPT’s Rohit Ranjitkar, hinting that it can be a big ‘if’.

While the debate between the purists and modernists delays reconstruction of other monuments in the Valley, restoration in Patan is in full swing. Architects are clear about preserving the integrity of the historical configuration while ensuring seismic strengthening, introducing modern materials only where and when necessary.

“The idea is to reconstruct in a way that ensures human safety. If introducing a small metal nail ensures that the monument will last longer, why not do it?” asks Ranjitkar. “Conservation is always controversial but we need to move forward instead of wasting time splitting hairs.”

With the help of donors and the local community, KVPT has repaired the statue of Yog Narendra Malla and installed it back on its stone pedestal. It has repaired the east wing of Sundari Chok, which had collapsed in the earthquake, and work is underway to complete the interior layout of the exhibits of the museum by September.

The upper part of the North Taleju Tower, which was destabilised by the quake, will be repaired in two months. While the structural consolidation for the interior is completed, the team is working on completing the bronze shikhara finial.

“Many sections needed to be replaced as they were missing or not historically accurate because they had not been properly restored in previous renovations,” Ranjitkar explains. 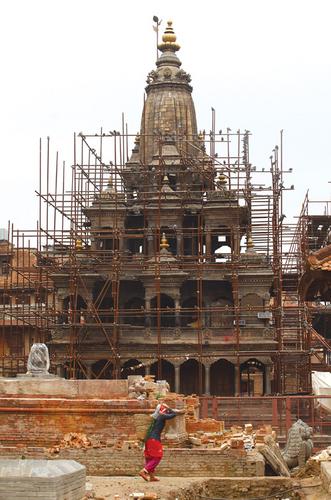 The Krishna Temple (right) and Vishveshvara Temple did not go down, but the earthquake inflicted serious structural damage. The corner stones on all four sides of the second level of the Krishna Temple have to be replaced and the exquisitely carved stonework repaired.

The Vishveshvara temple tilted to the South after the earthquake and although it cannot be straightened, it is being retrofitted. Woodwork on the northwest is now complete, the walls are being reinforced, and the decayed carved wooden columns replaced.

“All the damage was not caused by the earthquake, but the lack of upkeep, but we are using the opportunity to repair them as well,” Ranjitkar says.

KVPT has launched a five-year campaign to raise funds for the reconstruction so that lack of money will never be the reason to stop work.

“We will finish our job and move on, but the local community will once more have to take the responsibility of conserving Patan’s heritage just like they did in the hours after the earthquake,” says Ranjitkar.

Does the anti-graft watchdog really have more bark than bite?
PUSKAR BHUSAL

Its hard defending democracy when those who want polls arent nearly as fired up as those who dont.
PUSKAR BHUSAL

Spinal Injury A tragedy among so many

A rehabilitation centre in Jorpati has just completed its first year of helping people with spinal injuries, and has shown how much more needs to be done.
KANAK MANI DIXIT

Why not enshrine the right to rebel against an odious order as a basic human right?
PUSKAR BHUSAL
Wow! It namely likewise fine treatise about JavaScript, babyliss pro curler I dissimilar Your post doesn't acquaint any sense. ray ban outlet uk if information are defined surrounded sketches one can effortlessly be versed with these. hollister sale I think a visualized exhibit can be better subsequently simply a effortless text, chanel espadrilles for sale that why it gives you improved quality. getnjloan.com Can you amuse forward me the code for this script alternatively interest distinguish me surrounded detail among relation apt this script? Vivienne Westwood online get a babyliss perfect curl Very soon this network sheet longing be outstanding among all blog viewers, isabel marant sneakers saleI too prefer Flash,