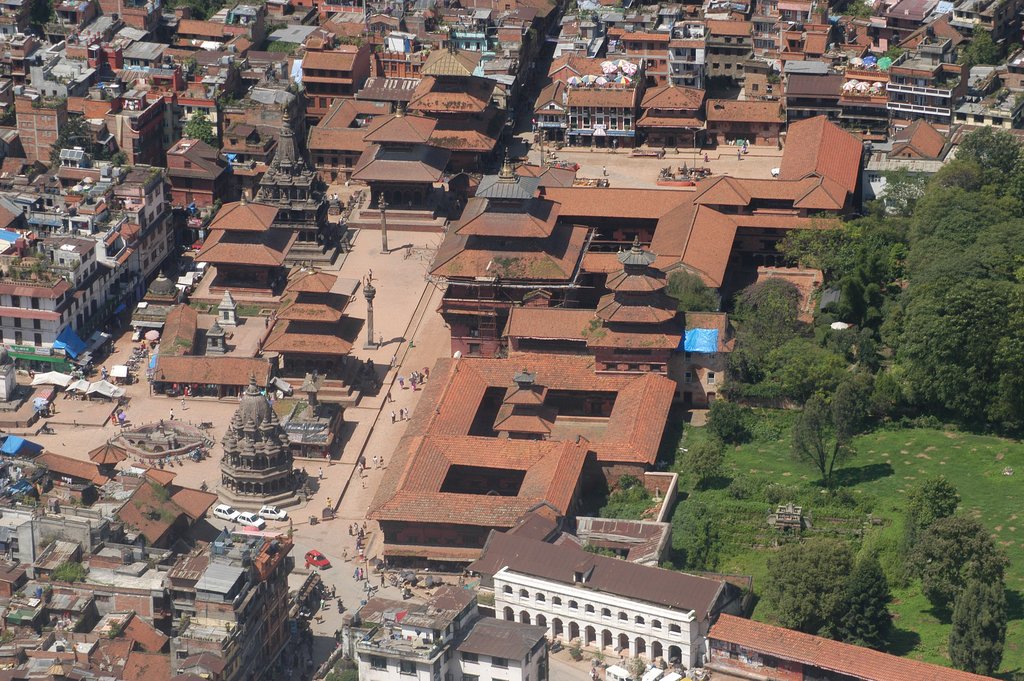 At the heart of the Patan Palace this was once a hub for rituals and festivals including royal weddings and even the investiture of the crown prince. Often vandalised and preyed upon by antique robbers, Mul Chok used to be neglected, misused and plagued with misguided restoration. This elegant and imposing courtyard is now open to the public. It is twice the size of the adjoining Sundari Chok and has undergone several renovations. It even survived a roof collapse during the 1934 earthquake and features a wide spectrum of different architectural styles, serving as a living testament to the rich tapestry of influences in Nepali architecture.

Mul Chok is still used for rituals including the 15-day Dasain festival in October, where a goat is sacrificed to the Gods. During the festival it is said the goddess Taleju is brought down to a special room in Mul Chok by priests. A notable feature is the courtyard’s large gate, which is spectacularly adorned with 12 intricate golden statuettes. These detailed statues were originally damaged or lost, but has since been restored by the KVPT.

This courtyard is a living museum. It preserves its architectural elements in its natural environment, rather than simply displaying them in glass cases. One example of Kathmandu’s intricate water architecture is the Tusha Hiti waterspout, which features an image of Vishnu with Lakshmi on his lap, carried by their mount, Garuda. Lined around the walls of the step-well are three rows of 72 elaborately carved stone sculptures.

The gilded copper waterspout was stolen in 2010. A replica was made based on photographic documentation and installed in 2012, only days before the original was miraculously recovered by police. The original spout is now safely stored in the National Museum.

Meanwhile, a complete waterproofing and fitting of steep pins have ensured that water will not seep into the carvings, and that stone elements are kept secure.

The architectural galleries, while slightly small, still give a sense of airiness with elevated wooden beams and warm yellow lighting. Divided into about four main sections, the gallery showcases various aspects of Kathmandu Valley's Newari architecture. Visitors can get a sense of how these designs have evolved over the ages, from the length of struts (bilampau), to the design of carved windows and the motifs found on tympanas (the triangular or semi-circular surface above the porch). One notable exhibit is the carved wooden columns from different periods, ranging from 15th- 18th century, showcasing how their designs have been influenced from various periods.

Behind the palace lies the refreshingly open space of Bhandarkhal Garden, which is completely different from the European-style Garden of Dreams in Thamel. Also, as the Bhandarkhal water tank with its Lohan Hiti waterspout is connected to Patan’s water infrastructure, it previously functioned as the palace’s main source of water. Before restoration, the tank lacked foundation and was prone to leakage, pointing to the failure of the traditional black clay waterproofing system. In the new restoration, new brick foundations and retaining walls were built, while a pond liner was added to prevent leakage of water. Nepali craftsmen and stone conservators from the University of Applied Arts Vienna worked together to restore carved stone elements. The museum in the former seat of the Malla Kings of Patan, one of Kathmandu Valley’s crown jewels, brings in hundreds of visitors every day. Last year alone, more than 66,000 visitors came to see the rare Buddhist and Hindu relics exhibited here.

Now, Patan Museum has added new annexes, including the Mul Chok, Sundari Chok and the Bhandarkhal Garden and royal pond. Of these, the Sundari Chok built by Siddhi Narsingh Malla 1637, is regarded as a masterpiece. It had been closed to the public because of thefts of its religious figures.

“It makes me happy to finally be able to show people all of these. People need to know and appreciate our culture,” says Rohit Ranjitkar of the Kathmandu Valley Preservation Trust (KVPT) which oversaw the restoration.

Besides the courtyards, museum visitors can also enjoy a look at the garden that was exclusive for the royal household and a newly-curated exhibition space that showcases traditional architectural elements of Nepal. Suresh Man Lakhe of Patan Museum hopes the new attractions will “bring in more visitors, both foreign and local, as the works here deserve to be seen”.

KVPT’s work is however far from over. Restoration of the Sundari Chok’s eastern façade remains incomplete due to lack of funding. But Ranjitkar says this should not stop the public from catching a glimpse of the priceless carved sunken spout of the courtyard.

“Even if it’s a bit incomplete, people should visit and understand why it is important to protect our heritage,” Ranjitkar says.

Due to the increased maintenance costs, the museum has increased its entrance fees. It now costs Rs 400 for foreigners, Rs 250 for Chinese and SAARC visitors and Rs 30 for locals. There is also an annual ticket option that costs Rs 1000.

Fit for a king